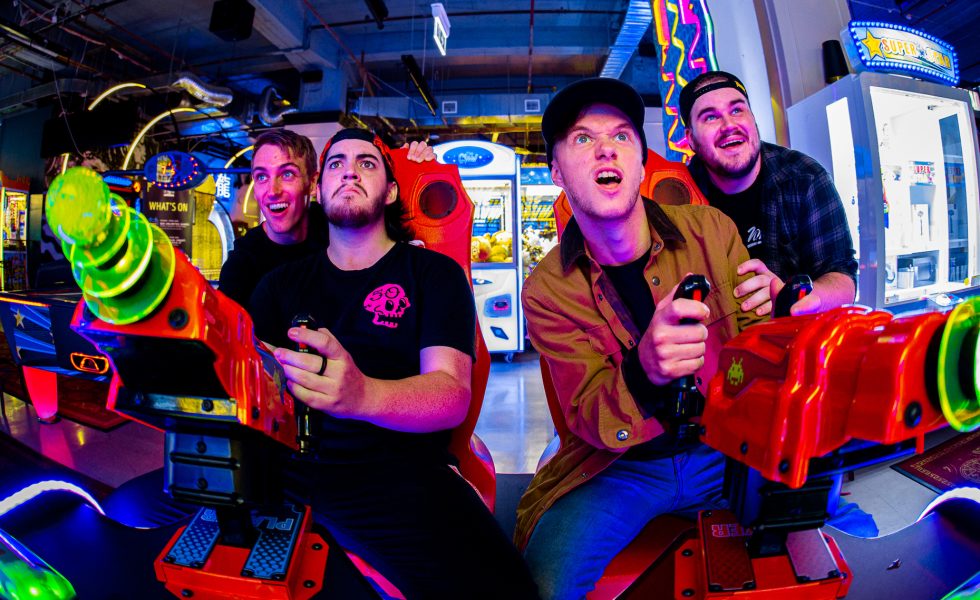 Hysteria are proud to share the exclusive premiere of brand new single Vicarious. “It’s been five months of work trying to get it up to a standard that we’re happy with,” says the band’s singer and guitarist, Andrew Taylor.

The new release is certainly of a high calibre, and is a great, happy bopper–but why so long on one song? “We’ve been in a band for years before this one,” explains Taylor, “and we learnt that writing songs and pumping out anything we did just doesn’t work.

“We started this band, released a couple of tracks and were like, ‘Right, we need something that’s really going to blow people’s minds,’ so we started writing tonnes of songs, picking the best ones that we loved and needed content behind it that we really loved.”

Blowing people’s minds is right, and as for additional content to support Vicarious, you can’t get better than Grizzlyshark’s tongue-in-cheek, anime laced video. Grizzlyshark definitely seem like they’re having a lot of fun when you watch their antics in the video—ultimately though, the whole package was a little more calculated than they’ve been previously. Towards the end of 2018 Grizzlyshark released single Shake Up The Wake Up–compared to the two singles, Vicarious is a step up on all fronts. The new video for example, is just wacky and wonderful. “We came up with ideas for the first batch of songs and every single one was a goofy idea, every single one.

“This idea had been on my mind for ages, especially with the Cheez TV Facebook page being active a bit more–we were trying to come up with ideas to parody. Green screen stuff, more ideas, it gained traction.”

Filmed at the home of bassist Joey McClennan’s grandmother, behind the scene stories have the aww factor as well as the wow. “Joey’s grandma has this awesome place where he used to watch Cheez TV when he used to stay over as a kid,” says Taylor.

“There’s this one section she filmed, actually, that didn’t make it into the video. We came downstairs and [Joey’s] sweet grandma was making everyone a cordial or something and we were like, ‘You wanna be in our video, Grandma?’ She looked so excited to be a part of it!”

We’re very slowly making tracks on a new EP that Vicarious will be a part of.
[ Andrew Taylor ]

Who knows, maybe a blooper reel is on the cards. Sweet old grandmas aside, Grizzlyshark have a lot of parodies, a lot of fun, and a lot of punk, with this new tune, yet it’s still incredibly melodic, hard-hitting, and certainly a track that’ll get you pumping every day. “I don’t think the music lines up with the video,” Taylor reasons. “The video sits on its own to be incredibly entertaining and a lot of fun to feel, to be honest.”

“I think it’s about when you get to that age and you don’t have the skills to help your friends with their life issues and all you can do is sit there and say, ‘Hey man, I’m here for you at the end of the day.’

“In high school you thought you had all the solutions to the problems, then you hit your 20s and realise you have no idea how to help.”

Sticking on the Freudian cap, Vicarious could almost be a representation of how juvenile you can feel in such adult situations. So how does this journey set Grizzlyshark up for new music later in the year? The band have received huge acclaim from music outlets like The Faction, who included them on their Hardest 100 in 2018. “I got a call from our guitarist about that,” says Taylor. “’We made it onto the list!’ I was like, ‘oh my God, this is weirdly huge!’” Indeed, it’s the next step to getting Grizzlyshark out of the Brisbane box and know to the rest of the country, and who knows, soon the world.

“We’re very slowly making tracks on a new EP that Vicarious will be a part of,” says Taylor. “We’re stagnating the releases as we go, making sure each track’s up to par and spreading the releases out, and yeah, just seeing what happens.”

The process of putting out a new EP is being given as much time and care as this single was. When Taylor is asked how that process is working out for Grizzlyshark, he laughs, saying, “It’s long!”