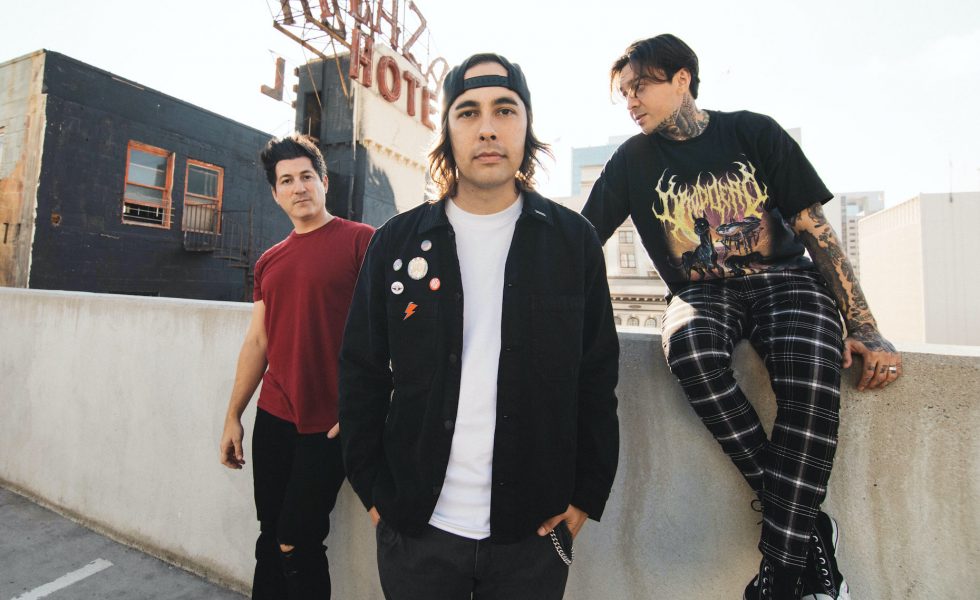 Today, the band has shared the visualizer for the latest single Even When I’m Not With.

The track follows the explosive, one-two punch of the September 2022-released comeback single Pass the Nirvana and its successor Emergency Contact, which have tallied over 20 million combined streams! Anticipation for the album release is burning at a fevered pitch, while Huffington Post, Gawker, and MTV all recently spotlighted PTV’s continued domination of their genre.

Fuentes offered a deep insight into Even When I’m Not With You, saying, “Musically, it’s the first song we’ve ever created that utilises the same looping riff throughout nearly the entire song,” Fuentes explains. “This was something that I have been trying to accomplish for years with our band and I’m excited that we finally found a way to do it with this one.”

Regarding the lyrical scope of the track, Fuentes states, “This song was inspired by a text my manager sent me while I was going through a rough time. I thanked her for being there for me, and she said, ‘Even when I’m not with you, I’m still with you.’ That phrase touched my heart and inspired me to write a love song dedicated to my wife about no matter how far away I am on tour, I’m still devoted to her, and we will always be connected through our love.”

As for The Jaws of Life as a whole, Fuentes says, “This album has truly brought us closer than we’ve ever been. It was extremely difficult for us to be off the road and apart for so long. We’ve never missed anything more than playing music together and never had such a strong appreciation for recording, touring, and simply being in the same room together than we do now. The Jaws of Life is about how life can sink its teeth into you and try to devour you. The negativity in the world and within your mind can be a vicious thing. We’re extremely grateful for this record, our fans, and the opportunity to play live music again.”

Pierce The Veil have become iconic in their genre—and rightfully so. Their return has been fiercely welcomed, receiving press praise from Paper, Gawker, MTV, Ones to Watch, Yahoo, and more. Meanwhile, the first single Pass the Nirvana racked up over 13 million streams since its September bow.

They’ve also debuted atop Billboard’s Top Rock Albums, Alternative Albums, and Hard Rock Albums charts twice–first with Collide With the Sky (2012) and its follow-up, Misadventures (2016). A decade after its release, the already platinum King for a Day shot to No. 1 on Billboard’s Hard Rock Streaming chart, driven by the viral #KingForADay hashtag on TikTok. Even with two gold singles and a gold album, this coming year could be their biggest yet.

Because this is the year of The Jaws of Life.

The band Rolling Stone once described as “hyperactive, progressive post-hardcore,” returns with album number five, full of fuzzy guitars, massive melodic hooks, and PTV’s distinct emotional heart. The Jaws of Life is Pierce The Veil at their most raw—crackling with urgency and immediacy. Never predictable, always engaging, Pierce The Veil continue to soar on the strength of highly potent energy, rich musicality, and a scrappy sense of authentic exuberant ambition that’s frankly unrivaled. Fuentes, Perry, and Preciado put volatile, angsty, confessional emotions into the music, which is why their songs resonant with so many. “No matter where the band performs, fans will show up,” wrote Loudwire. “When you see Pierce The Veil live, you’ll understand why.”

PTV’s evolution from album to album is nothing less than stunning. The early buzz generated by A Flair for the Dramatic (2007) made its follow-up one of the most anticipated albums of 2010. Selfish Machines shot to No. 1 on Billboard’s Heatseekers chart. The Chicago Tribune saluted Collide with the Sky for its “post-hardcore punk with more than a few nods to Queen.” They became a true arena act on Misadventures, selling out huge venues without losing the intimate connection with their fans.

The Jaws of Life was produced by Paul Meany (Twenty One Pilots, Mutemath, The Blue Stones), and mixed by Adam Hawkins (Machine Gun Kelly, Turnstile, Twenty One Pilots). Deadly serious subject matter abounds, but Pierce The Veil enduringly navigates it all with grace. The lyrics continue the Fuentes tradition of painstaking honesty and clever twists of phrase. Pierce The Veil perform at the biggest festivals and is counted among the biggest and brightest of a younger generation of bands. But it all starts with the songs. The Jaws of Life is filled with the kind to keep the PTV fire burning forever.