HELLIONS Ringmasters: The Story Behind their Obliterating Opus 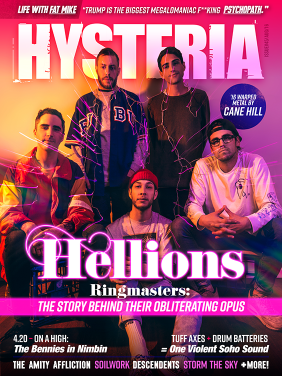 Hellions peerless Opera Oblivia has captivated Australia and the world. Talking to all five members of the company, we get the real story behind this obliterating Opus. Our burning bright #CoverStars, only in the magnum opus edition of Hysteria #45.

Prime hardcore exports The Amity Affliction remember doing time in the clubs and pubs, and now they’re crisscrossing the globe many times a year. We chat with Ahren Stringer to see what’s in store.

GET LAID (OFF) WITH DESCENDENTS MILO AUKERMAN

Big brain nerd Milo Aukerman got laid off and it was the best damn thing that ever happened to him. Read as he screams home from work and gets the Descendents boys back together.

PREPARE FOR THE VIOLENT SOHO-NIC EXPLOSION

Violent Soho are prime time after winding round and round the dingy pub circuit. So how do they fit a monster sound into a tiny cabinet? Read more in #Soundcheck.

THE BENNIES TAKE A TRIP TO … ER … WHERE WAS IT AGAIN?

Oh yeah, totally. Nimbin. You know, where there’s about five bongs for every dude. The Bennies took a day trip to Nimbi … but went everywhere, man. That’s #OnLocation in the mag.

Metal? On my Warped Tour? Cane Hill rev up the punks and hardcore kids, taking their big damn metal wang and penetrating the air with it. Yes, that actually happened! Sort of.

“Rock ‘n’ roll isn’t meant to be perfect.” Beach Slang’s James Alex wears his heart on his chest when it comes to his maddest jams, as we found out in an intimate #RecordTalk.

Another Soilwork album in under a year? Oh, hang on, this is a … compilation? Are you sure? We got the yay or nay from the Helsingborg mainman himself.