ATTILA Creating a Storm of Chaos 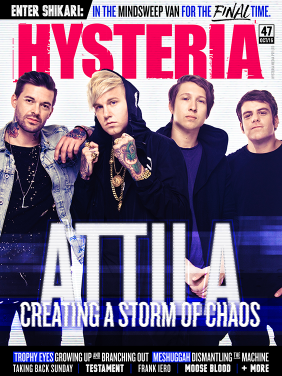 Haters make them famous: we get inside the mind of the “Kanye West of metal” with Chris ‘Fronz’ Fronzak, the fearless leader of our  #CoverStars ATILLA. Get out your notebook, because Fronz has self-proclaimed wisdom to share. PLUS: Enter Shikari, Meshuggah, Moose Blood, Testament, Trophy Eyes, Taking Back Sunday and more in minty fresh Hysteria #47.

Enter Shikari close off their latest touring cycle in the land Down Under and talk shoeys, panic and crazy crowds.

Andy Williams of Every Time I Die real talks cabin fever, wrestling and making the best album of their career despite wanting to throw in the towel.

It’s taken 20 years, but Meshuggah have finally embraced the pleasures of imperfection. Who would’ve thought the djent-masters would ditch the drum triggers and quantised guitars?

The UK quartet look back at My Chemical Romance’s The Black Parade and how it changed the game, not to mention the hairstyles of most dudes circa 2006.

Trophy Eyes have evolved on to a higher plane of existence with new album Chemical Miracle. How do you rise above the grind and create something great? Let’s find out.

Frank Iero never expected to be a frontman, but here he is with his second album, ready to fly.

Nobody loves you or irritates you quite like family, and Testament have been stirring each other up something wicked while recording Brotherhood of the Snake. Thrash is back!