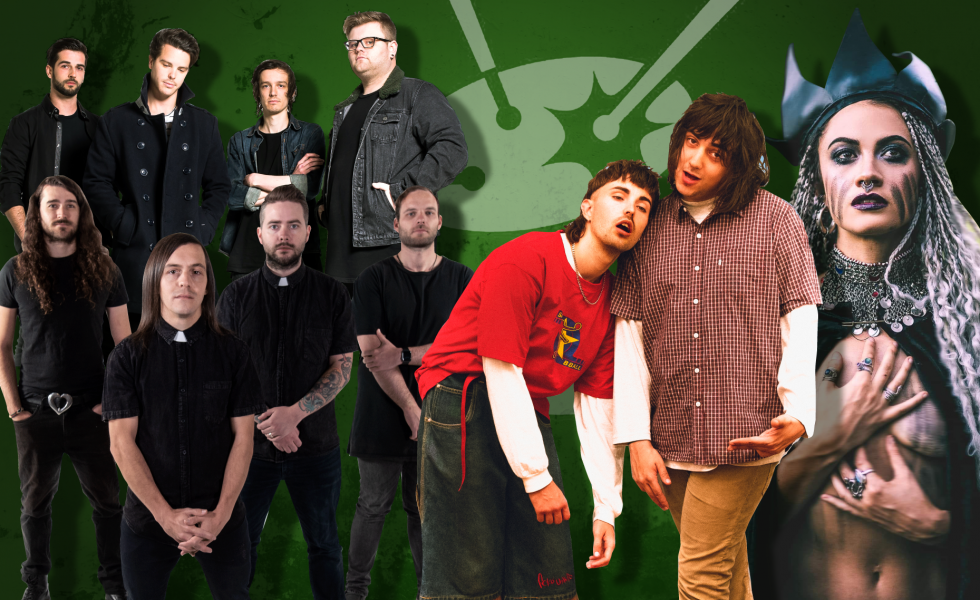 The rock ‘n’ roll business at its core has always embraced risk taking. Proving itself early on in music history as an ever changing and evolving genre; whether it was the heavier instrumental, mixing high and low octave vocals, grungey punk lyrics, the introduction of unclean singing or the influences absorbed by other genres.

As music shifted through political climates and social changes, we were gifted with the introduction of sub-genres within our beloved rock ‘n’ roll. There are many sub-genres that now entice our ears; nu-metal, hardcore, industrial rock, pop-punk and more—the creative offspring of artists willing to push boundaries and expand into new territories.

But at least one thing has remained consistent throughout the years of music evolution, the ferocity, passion and vigour that underlays almost every song falling under the age old umbrella. In short, rock has definitely not gone soft.

Don’t take my word for it though. Listed below is 15 Triple J Unearthed bands, all of whom are making names for themselves in Australia’s exciting music scene and representing just a fraction of the new talent constantly coming out of Australian towns.

A nice reminder, too, that all your favourite big-name bands were once here—as local, passionate artists, ready to prove themselves to the masses.

Melbourne nu-metal group BLKLST released their debut self-titled EP back in 2015 and have since remained relevant with a slew of singles, including one with guest vocals from Aidan of Dealer. The bands multi-facetted tracks and intricate melodies created a solid buzz ahead of their 2018 debut album Hard To Swallow, which received high praise from fans and critics alike. Less than twelve months later, BLKLST can proudly add to their musical repertoire with EP Spider Love released earlier this month—showing off more of those capturing riffs and sing-along choruses fans love so much.

Creating a well-balanced juxtaposition between country and punk rock genres, Melbourne band Catholic Guilt pride themselves on their ‘honest music’ with raw lyrics paired with an upbeat, feel-good tempo. Fresh on the scene with their debut EP Hymnbook Volume 1 only released in April 2018, Catholic Guilt have already won over fans through regular features on Triple J and a string of support shows down the Australian East Coast. The band released single The Awful Truth last month and has full intentions of following up the release with a wide-spread Aussie tour.

Emerging from hibernation with a new name and determination, Melbourne based prog-rock band Dead Before Breakfast have already gotten our attention with a single track released in May as a teaser for their debut album Rogue – set to release this month. The single Haze showcases impressive vocal range, catchy lyrics and well-paired instrumental that enhances each element of the song to give us one hell of a full package.

A four-piece garage-punk group from Sydney’s Northern Beaches, Down For Tomorrow have quickly moved up the ranks in the local music scene. They received a solid amount of streams on the release of their first EP Golf Is Not A Sport in 2017, but it was their 2019 single What Could Have Been that catapulted them into a new league. Now their latest single Thanks To You, off their EP of the same name released 7th June, has already received 14,000+ plays on Spotify in less than a month. With an EP Launch show scheduled for 17th August and an addition to Triple J Unearthed’s regular rotation, this could be the year that changes it all for Down For Tomorrow.

Hailing from Melbourne, Foxblood’s melodic hardcore style quickly intrigued many new fans in 2016 with the release of their debut album The Devil, The Dark & The Rain. In three years, that intrigue has turned into anticipation as regular single releases kept us chomping at the bit; none more-so than their second album single Kill The Lights released at the end of May. This highly anticipated second album Grief & Mercy Sleep is due for release on 5th August and fans can enjoy a three-date release tour in Brisbane, Sydney and Melbourne to celebrate.

Blending techno-pop with carnal drumming, two year old Adelaide band FYRE BYRD have created quite a stir during their infancy. Releasing two singles in 2018, Take Me Out and Anywhere I Am Is Home, the duo’s nationwide Take Me Out Tour boasted two sold out shows back to back. Keeping up the pace in 2019, FYRE BYRD just released their latest single Put Me In A Dress and if the video teaser they released is anything to go by, we’re hoping a music video for this absolute banger will be here in the not-too-distant future.

With eerie ambiance that could set the scene of an abandoned circus or haunted asylum, Adelaide’s symphonic-metal group In The Burial has recaptured our black hearts with their 2019 album Lamentations: Of Deceit & Redemption. Ticking boxes across several musical categories, this is a band who proves that the standing tradition of risk-taking and genre-fussing in Rock N Roll lives long and lives strong.

Boasting good old fashioned Aussie metal, fast-paced and brutal, Brisbane outfit Medics Of Pain are a blessing for lovers of heavy thrash and riffs that could make a pimp blush. Since first hitting the stages in 2017, the group has already racked up an impressive amount of live shows; including appearances at Ye Gods of Metal (2017), Metal of Honour 11th Anniversary (2018), MetalStorm Festival (2018) in Sydney and Shredfest (2018) just to name a few. With the release of their debut album Let’s Bang in April and shows planned till the end of 2019, there’s plenty of opportunities to get down and dirty with the Medics themselves and experience their impressive presence for yourself.

In two short years, Victorian prog-metal band Mirrors quickly gained and held fans’ attention with their intricate and layered sound. The group has released two EPs, supported heavy legends on shows with The Devil Wears Prada, Alpha Wolf and Drown This City, and even scored themselves a slot at Unify Gathering 2018. Mirrors are celebrating the release, and success, of their latest EP Cold Sanctuary released last month with an EP Launch Tour in Victoria on 20th July.

Hypnotising you with kick-ass melodies, cut-throat vocals and chant-along versus, Perth’s alt-rock band Moana have all the right ingredients to cast a musical spell over us. Recently named Band Of The Day for a US publication it’s not surprising that this quartet from Perth, that already has a heavy presence in Perth’s live music scene, has gained international recognition. After releasing their debut album in 2015, two singles in 2018 and the most recent single The Cultess in May this year, Moana have continued to explore the fusion between genres and art-forms within their work. With a debut LP on its way, and if what we’ve experienced thus far is any indication, Moana’s next addition to their discography is sure to be alluring, engaging and undeniably unique.

Brisbane punk rockers Oldtown peaked the interest of many in 2018 with their garage-punk style riffs, raw vocals and energetic pace. Their debut EP Death Of The Party received airplay for several of the tracks on Triple J’s short.fast.loud, with song The Swindler securing a spot in the program’s The Best from The New Noise category for 2018. After a regular touring schedule that’s seen them support She Cries Wolf, Life Pilot and FANG, the Oldtown lads will soon be sharing the spotlight alongside rockin’ legends like MASSIC, Dirty Brew and Triple Kill at this months MoonDoll Metal Festival.

A trio of punk lovin’ not-so-regular dudes, Brisbane’s Regular Band invoke a nostalgia for the 90’s grunge era that most of us know and love. A combination of slow build verses, lyrical honesty and heavy hitting choruses that wouldn’t be out of place in any dive bar, the group have been enticing our ear holes since 2017; regularly releasing singles and EPs that include fan favourites Golden Sage, Centrelink Radio and Anenamie. Their latest single Snow White dropped just last month on Triple J Unearthed and Regular Band will be performing the live rendition at The Zoo on 21st June playing alongside fellow Aussie band glasshouse.

Though the Tasmanian rockers ROADKILL aren’t new to the Rock N Roll game, having formed in 2006, the last three years have seen the band go from local known talent to a hard hitting Australian favourite. The five-piece rock band released albums Extinct (2016) and Ruled By Machines (2019) to a fan base of loyal and new listeners, giving us a good dosage of old school rock and drawing the attention of all the right people to secure a slot at the 2018 Steel Assassins – True Metal Festival.

Indie-rock duo TOWNS are putting the rad back in Radelaide pairing intricate guitar riffs with emotion-evoking lyrics, all wrapped up in vocals that transport you to an open field on a sunny day. Off the back of their recent support slot on the Dear Seattle Australian Album Tour and the success of their April 2019 single Safe To Stay, don’t be surprised to find this dynamic, addictive duo playing at venues in towns across Australia before the end of the year.

Weight Of The World

Boasting a mix of melodic choruses, heavy instrumental and catchy quick-paced versus, Sydney’s post-hardcore outfit Weight Of The World may be new to the scene but they’re giving us plenty of reasons to stay tuned. The band released their debut EP Judgement in January this year and recently played alongside PILLAGER at Rad To Death!—a heavy farewell show for the much loved music venue in Wollongong, Rad Bar.