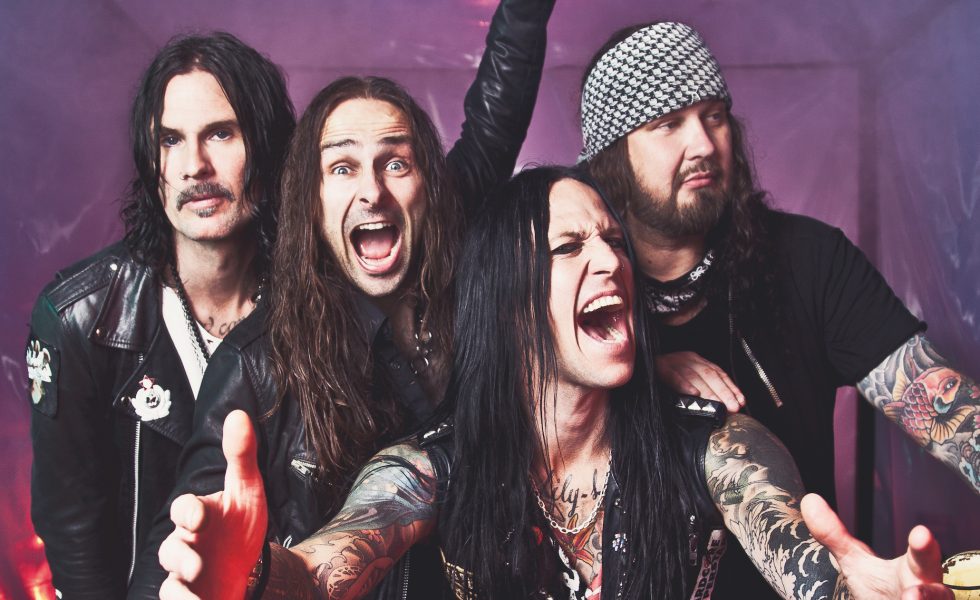 Every rock and roll band has stories from the road. Many are the kind that stay on the tour bus or the dressing room. There are others that probably should stay there. Then there are those that leave you wondering if they ever need to be retold.

Hardcore Superstar vocalist Jocke Berg has a rather unsavoury tale from his band’s last tour with Buckcherry, several years ago.

“We did five weeks of touring together in 2013, and their bus broke down,” he recalls. “So we had a share a bus. I remember their former guitar player, Keith Nelson … I woke up one morning while he was farting in my face! I thought to myself, ‘That was a rude awakening dude!’ It was nasty!”

Just in case anyone may doubt the veracity of his story, he promises it is true.

“I can still remember the smell!” he adds. It’s not a scenario that’s likely to be repeated when the two bands hit Australia early next month. Not only is Nelson no longer with Buckcherry, but there’s probably been a little bit of growing up done since back then. Only a little bit, of course. This is rock and roll, after all.

“I mean, I’m home right now and the family’s down at breakfast,” the singer declares, “the fourth kid is on the way. If you have kids, you have to release your inner child, and that’s what I’m doing up on stage. I’m 45 years old, but when I’m up on stage I’m 18, 20. I stage dive and do all these things, and my wife says, ‘Don’t forget you’re 45! You could hurt yourself!’ But when you’re up on stage, it all blows away. That’s the good part of playing rock and roll. It’s like never having to grow up.”

However much a Peter Pan or a Dorian Grey rock stars may believe—or present—themselves to be, no one stays young forever. Berg admits to a lot of exercise to keep up his kinetic stage presence, and as the hyperactive frontman he is, he certainly needs it.

People measure success in money. Of course, I would love more money, but if you make people happy with the music you make, that’s success!
[ Jocke Berg ]

“I’m always working out. I run a lot and I do crossfit, and stuff,” he says. “It takes a bit to do a high energy show. People say, ‘How can you run so much on stage and still sing and it doesn’t bother you?’ It’s a thing I do when I’m on stage! Even when I sing a ballad, I can’t stand still. One day the band said, ‘You have a task when you go up on stage now. You have to stand completely still while we do this song’. And there was a bet going on, and I lost! Because as soon as the song started, I couldn’t just stay there!”

Currently touring on their eleventh album, Hardcore Superstar have been waving the flag of rock and roll since 1997 with their patented and potent blend of “sleaze and metal, thrash and glam,” to quote Berg. They are firm believers in the health of the music they play, something reflected in the title of their current album – You Can’t Kill My Rock ‘N Roll.

He uses a recent candid conversation as proof of his belief: “I talked to a construction worker the other day,” he relates, “and he told me that they really liked our new album. They listen to it on the site, and it makes their day easier. They listen to the record during the day and it makes their work easier. That’s the best review I ever heard! We’re helping people get through the day. That’s success, for me.”

Hardcore Superstar have won plenty of success in their Swedish homeland with high-charting singles and several Grammi nominations, but Berg is most happy when his music is making people happy. “People measure success in money. Of course, I would love more money, but if you make people happy with the music you make, that’s success!”

The Gothenburg quartet’s body of work has veered between albums bordering on thrash metal to those tinged with glam rock. While current album You Can’t Kill My Rock ‘n Roll is very solidly in the rock vein, Jocke Berg promises that their next one will be heavier.

“When we write songs, it’s not like, ‘Let’s do a heavier song’,” he explains. “It’s whatever comes out. If it feels good to us in the band, we put it out. That’s the thing about us—every record is different from the others. The last album was a rock and roll album, the one before that, HCSS, is more diverse compared to others. There was even a grunge thing on that album. We’re doing different albums from album to album, but there’s still a reference between all of them. You can hear that’s it’s Hardcore Superstar. You listen to a lot of bands when they release their debut, then the second album sounds exactly the same as the first! I don’t want that!”

Catch Hardcore Superstar with Buckcherry at the following dates: