HAPPY. // All About Imposter Syndrome 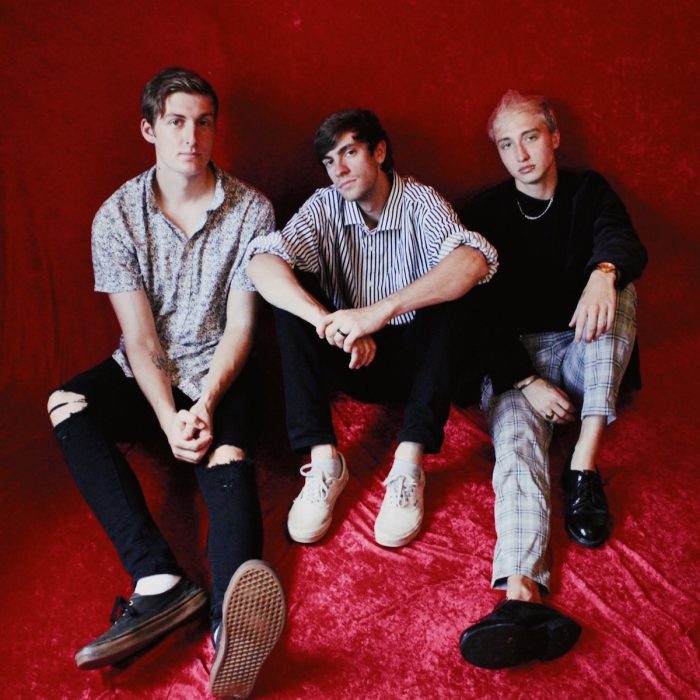 It’s been a whirlwind few years for emo-pop outfit, Happy..

Following the self-release of their 2016 EP The Endless Bummer, the trio signed to Rude Records, released their debut LP and toured all around the US.

But amongst all this success came imposter syndrome. We caught up with Happy. vocalist Tate Logan to chat about the all-too-personal emotion and find out how it influenced their second LP of the same name.

Hysteria: Congratulations on the release of the new album, Imposter Syndrome. How have things been for the band since it dropped?

Tate: Thank you! The response to the record has been really awesome considering we released it during a pandemic when we couldn’t tour to support it. I’m really glad we chose to do that though, as opposed to waiting. The subject matter of the record is amplified by the current situation all musicians are in. It felt right to stay connected with fans any way we could. We are also already moving forward and writing tons of new material, so Imposter Syndrome came out at the right time.

As the name implies, the record was really influenced by the effects of imposter syndrome. Tell us about your experience with it as musicians.

It’s weird because when you’re young you have this ideal picture of what it would be like to be a ‘Rockstar’. But then you sign a record deal, make a bunch of music videos, your album is in Target, you’ve got fans getting tattoos of your lyrics and you think: is this even real? Am I actually talented and deserving of this or am I the butt of a huge joke and unaware of it? It’s a constant battle in the head of a lot of musicians. We sometimes feel like frauds. It doesn’t mean we aren’t grateful; we are SO INCREDIBLY grateful. We love our fans more than anything in the world. It’s a separate concept from that. Imposter Syndrome is a very personal idea that I think people in any profession can relate to. It’s feeling like you don’t know what you’re doing, that you don’t have it figured out, or that you don’t belong when you have evidence that proves otherwise. It’s all in your head.

Am I actually talented and deserving of this or am I the butt of a huge joke and unaware of it? It’s a constant battle in the head of a lot of musicians. We sometimes feel like frauds.
[ Tate Logan ]

Was it challenging putting those personal experiences out to the world?

Absolutely. It’s a very vulnerable thing to admit as a musician. Bands are usually viewed as having lots of money, fame, and success, and that is an easy facade to create. The truth is a lot of artists are struggling financially. We all love what we do so much that it overrides all other obstacles. Our passion for music drives us no matter what, but we wanted to be transparent about how difficult that can be sometimes.

There’s a real nostalgic feel to the album. Tell us about some of your major influences?

We really love all sorts of music from the ’90s and early 2000s. A lot of my influences would be stuff like The Wallflowers, Sugar Ray, Marcy Playground, Sheryl Crow, Fiona Apple, Rilo Kiley to stuff like All Time Low, Teen Suicide, Microwave and The Front Bottoms. It’s cool because John (Palmer, guitars) grew up on jazz and metal and Sean (Bowick, drums) loves Paramore, Blink 182 and Green Day so it makes a cool mix.

You worked with Marc McClusky, who’s worked with some huge names like Weezer, Motion City Soundtrack and The Front Bottoms. What do you feel he brought to the table?

Marc is totally amazing. He’s really a genius. He also is such a kind person. He let us stay with him for the entire 17 days we were in the studio. We drank our coffee together, made music together, played video games together, and he even took us out for a lovely meal. He’s truly awesome. He had worked with so many of our influences and inspirations that we just clicked. Everything was so smooth and fun.

What were some of your most memorable moments from the recording process?

We recorded the album in Chicago in January. We are from the south and had NO CLUE how to deal with that sort of cold weather. Our car got stuck, we busted our asses repeatedly on the ice, it was hilarious. Sean also played drums on this record for the first time ever in the band. He had done bass in the past, so it was super sick to watch him do both!

What do you want fans to take away from this album?

2020 was such a stressful year—we hope that this album offered an escape for people. There are songs on this record about love, death, friendship, depression, sexuality and so many more things that I think will resonate with different people for different reasons. I hope fans take away whatever they needed from this album.

What’s in store for the band next?

We have so much cool stuff planned for 2021. We have written a song with one of our all-time heroes that we are freakin’ thrilled to release. We spent some time in Los Angeles filming a very special secret something that will come out soon along with a new merch line. Writing! Live streams! Tik Tok’s! so much stuff!