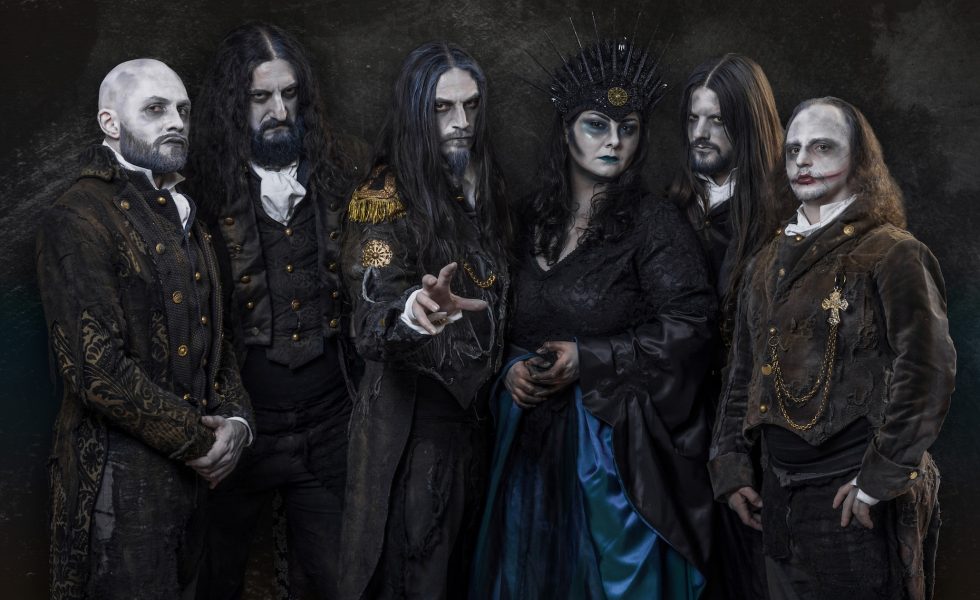 As Halloween nights draw closer, a sinister tide swells closer to Australian shores. Fleshgod Apocalypse, the dark and dramatic Italian purveyors of ornately embellished death metal, prepare to unleash their latest and most venomous album to date, Veleno, upon Australia.

MORE: HALLOWEEN HYSTERIA 2019: Throws A Hard Six With New Additions To Line-Up REVIEWS: HELLOWEEN: United Alive in Madrid // REFUSED: War Music // CITY AND COLOUR: A Pill For Loneliness // HARD-ONS: So I Could Have Them Destroyed

“The reception we’ve had on this album has been great,” says vocalist and guitarist Francesco Paoli of Fleshgod’s recent album Veleno. “It’s probably the most positive feedback we’ve ever had. It’s the best sounding live material yet, so it’s a win-win: fans love it and we love playing it. What we will try this time is a little bit different; we will of course play as many of the classics as possible, at the same time try to focus on how certain songs sound live. We are going to play new songs, olds songs…we pick up the music based on how important the songs are the moment and also how the song sounds live. If it sounds good, it’s good to go on the setlist.”

Veleno weaves a dramatic tale about human nature across the album. On whether this sense of narrative will be retained when deciding what to include in the setlist, Paoli explains that there’s more to it than just retelling Veleno. “Well, we are a concept album band,” he says, “let’s say, because every album has a kind of concept running through the songs on the album. At the same time, we are also a concept band, so all the albums have some continuity, are of a specific mind, and we indulge that. So even if some songs come from an album that based in analogy, like King, or a very historical album like Labyrinth, which is more like historic [themed], or if it comes from an album like Agony or Veleno which are more about the subject so it’s a little bit more direct, maybe all this stuff can coexist because the message that’s behind is always the same, only a different way alighting different aspects or different ways to transform and translate a certain idea into something with an artistic value.”

“At the same time”, Paoli says, “music-wise, we try to keep the dynamics, we try to make the music have the feel that it goes up and down, we don’t want to be boring and we want to create, and refer people to something stronger than going to something a little bit more atmospheric. So it has to be a journey, and we try to keep this as a rule when we decide the set.”

We have a massive amount of people who really dig in and want to learn more and are interested in what we write and what we talk about, so I’m impressed. Sometimes I feel like I need to go and study more and learn more for myself, and it’s beautiful. It’s not boring, it’s not just fun, there’s something going on, the intellect is moving and it’s important to feel alive.
[PAOLI]

Fleshgod Apocalypse has become renowned for their stage show, transforming a live set into a spectacular theatrical performance. For Paoli, this is more than simply gripping entertainment. “If you want to just listen to music you can just listen to the album right?” Paoli laughs, “I really think that the extra thing that you can get when you go live, at least for us, it’s the theatrical aspect.  It’s something, a different art that can be included in our proposal, which is mainly music. Yes, we work on this, we practice, and we rehearse the show, we try to include all this part where we somehow give a different interpretation. It’s fun for us, and it’s cool, at the same time as very entertaining for the people. It’s something that you don’t get when you just listen to music. So I would say that live, for us, is fifty-fifty between what you see and what you hear.”

So, how does Paoli think that the visual aspect of the live show enhances or deepens the concepts in the music? He reflects for a few seconds, then says, “I think the visual aspect, especially the way that we are dressed, you know stage coats and whatever, is more related to the overall concept behind the band. It’s theatrical, but it’s not strictly related to the music, the lyrics themselves. It was the idea behind the band to try to represent musicians of the 1800s and 1900s, you know, trying to mix their music style, which was sort of the classical style with modern music, which is heavy metal. This is the concept behind, it was just fun, this is a very simple, entertaining thing. There’s no straight connection to the lyrics. The good thing is that these things can coexist, the way we are dressed and the way we are onstage gives even more importance, and more drama, to what we talk about lyrically in the songs.”

There certainly are some complex and provocative themes on Veleno, exploring dense ideas drawn from Epicuran philosophy such as the fragility of the human condition, self-destructiveness, and the [in]ability to use reason and rationality. Discussing whether this aspect of Veleno has been more widely recognised, Paoli says, “I think so, I explained it as much as I could in interviews, and have had very interesting discussions about this. One thing is, that you can listen on different levels. You can have a more superficial layer, and you can enjoy the music. Then you have the middle layer, which is ‘okay, I want to know more, I know there is something going on with the lyrics, something going on with the concept, but it’s not as important as the music is’. And then there are a lot of people, and I am surprised by the numbers, that really care about the theory, and want to understand, sometimes even its great the way they invent their own interpretation, as most of the stuff can be adapted to the experience of each person…we have a massive amount of people who really dig in and want to learn more and are interested in what we write and what we talk about, so I’m impressed. Sometimes I feel like I need to go and study more and learn more for myself, and it’s beautiful. It’s not boring, it’s not just fun, there’s something going on, the intellect is moving and it’s important to feel alive.”