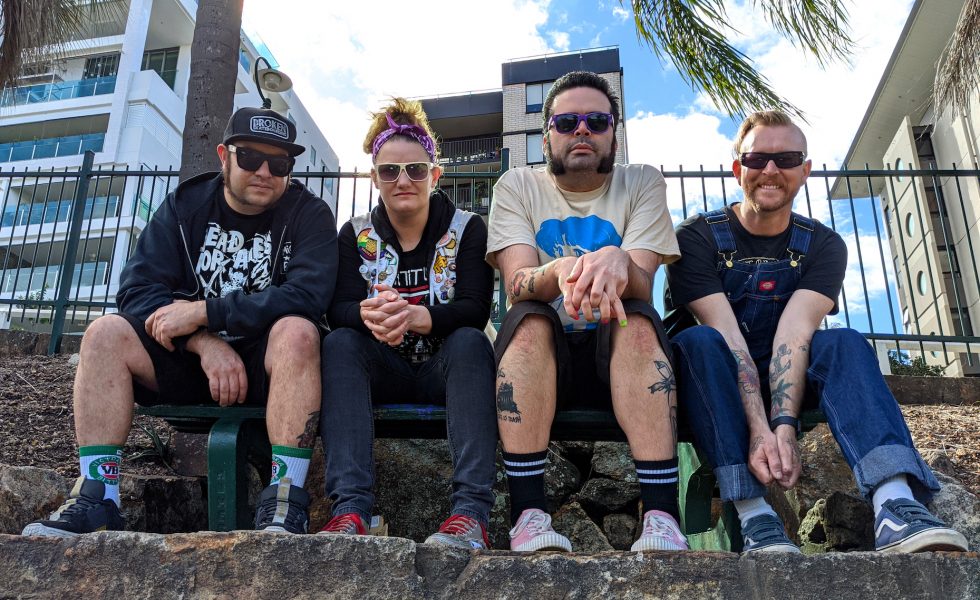 Flangipanis may be 13 years in, but they’re still out here to prove that there ain’t no party like a Flange party.

And despite the setbacks provided by the c-word (c*nts or COVID, we’ll let you decide), the four-piece have still managed to bring this energy to their eighth LP, Fuckin Woo!

Before the band take the record to the road (they do have Oz tour dates planned for the end of the year, and a feature on Halloween Hysteria around the corner, after all), we got them to give us a track-by-track rundown.

This song is about battling depression and the helpful advice that is still unachievable even though it’s so simple. Josh #1 wrote a super bright pop song and wanted sad as fuck lyrics, and Jodie more than delivered on the sads.

This one started from that little guitar lick in the intro. It sounded suspiciously like a certain little band from Poway, California, so we were just playing around joking with that idea but ended up coming up with a song we decided was too fun to ditch. Well, as fun as a song that advocates leaving a harmful relationship and supporting people through that painful transition can be.

YOU DON’T HAVE TO BE A CUNT

This song is about not trusting the government. It touches on how overwhelmed and furious we are at disgusting decisions made in the interest of the “elite”. Jodie had the concept and the chorus, and then we filled out the verses just sitting round drinking one night, listing a bunch of stuff that was pissing us off. Rhyming racists and faces definitely happened a few sangrias in …

Worthless started when Josh #1 was playing in a kinda country band years ago and was listening to a LOT of Shadow League. After that band folded, the song spent years in hibernation till we dusted it off, sped it up, and Jodie added some perfectly country lyrics to it. Generally, it’s about dying too young, feeling worthless but being worthless together: Solidarity after loss of life.

Faking It is about the growing inaccessibility of healthcare. Private fees are unregulated, and government funding is being shaped to reduce and reform, leaving those who were once able to access care having to jump through significant hoops or be left without.

This song is dedicated to creeps who “like women in music” but actually only go to gigs to perve. Josh #1 bullied everyone into playing this slower and slower, right up till sitting in the control room shouting at Josh #2 to drum slower.

This is about a mate that was on the train and had to deal with a punisher having a smoke and wanting to chat to him. Shout out to Bragg for recording the samples for us.

Josh #2 wrote a riff that kicked around for a while and then eventually morphed into this. It came together so late we hadn’t even heard Paul’s vocals till he recorded them. Oh, and it’s about skating…if you were wondering.

Freepunklyrics was a joke between two friends to write the most cliché and obvious punk lyrics they could. Years later, it was dug up via a podcast and a bunch of people recorded their own versions of them for a comp. We did a demo for that but always wanted to do it properly, so now you get to enjoy the in-joke as well.

SNACKS AT THE BAR

A song about bar snacks, which can be a helpful offering when trying to impress. Of all of the serious songs on the album, this one could be the darkest glimpse into Jodie’s confusing mind. Our wonderful mates Wayne and Ben provided the brass.

A factual self-reflective list of achievements as a black-sheep aunty.

This is kind of two songs smashed together, the verses were meant to be straight-up sad and originally were slated for Brand New Day while the chorus was about being at peace with your averageness. Wayne, Ben, Ro and Steve (aka Blowhard all-stars) came in with almost no prep and did the brass parts for this on the fly. They nailed it, and we couldn’t be more chuffed to have such talented friends.

The awkward hi-hello before you get to the drinking part of the night. Musically this one was pieced together pretty late in the game, and a lot of the parts didn’t find their final form till we were actually recording.