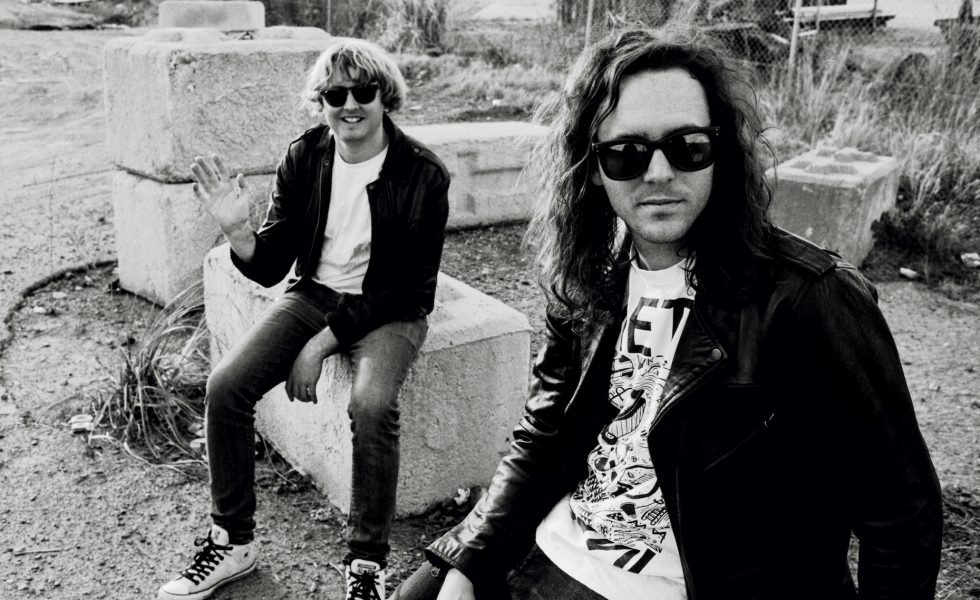 Brisbane outfit DZ Deathrays have had an upward trajectory in the last ten years since their inception.

Double ARIA awards winners in the category of best hard rock/heavy metal album for their 2012 debut Bloodstreams and their 2014 follow up Black Rat. They have now reached another milestone with this year’s critically acclaimed release Bloody Lovely.

Their solid national following has given them the opportunity to play in multiple tours, selling out thousand plus seaters. This year alone the dance punk trio hit the road hard to support the Bloody Lovely album as well as an appearance on the Splendour in the Grass festival following a ten-year anniversary tour. They will end the year by playing Beyond The Valley in Lardner, Victoria and the Best Night Ever festival on the Gold Coast with Brisbane buddies Dune Rats plus The Gooch Palms, WAAX, Raave Tapes, Totty and Crum. Hysteria spoke to drummer Simon Ridley about looking back at the last decade and all they have achieved during that period.

“It’s pretty surreal, we didn’t really think we would do anything close to what we have accomplished, we just wanted to write music for ourselves and do a tour of Australia, so to have written three albums and to keep going for ten years is pretty wild to us. More and more people seem to be coming to the shows and that is crazy to us. In the beginning we were just playing house parties, playing fun party music and the music connected with people who just wanted to have a good fun night out and those people eventually started coming to our shows”

It was rad being a two piece band but if you want to expand your sound it becomes a question of do you have to get backing tracks? Or do you just get another person to play? So we just got another guy and we got lucky because backing tracks are boring and I feel it’s cheap if you’re a rock band.
[ Simon Ridley ]

Shane and Simon are no strangers when it comes to playing festivals; they both went as punters to the Falls Festival and Splendour in the Grass five to six times before they were ever invited to play them “Being now on the other side is so awesome and not needing to pay for tickets anymore” (he laughs) “I think Best Night Ever will be the best night ever!!! We’re all friends with the bands on the line-up, we all started playing music in Brisbane around the same time so we’ve all gone to each others shows; we did a world tour with Dune Rats two years ago and we’ve done shows with The Gooch Palms, WAAX and Totty so it’s going to be a lot fun with familiar friends”.

With a busy schedule for the end of the year and appearances at Party In the Paddock in Tasmania and City Limits in Perth early next year, the band will also be trying to fit in time to record the next album as they already have new songs written. This year however has all been about hitting the stage; they even toured Europe with a very positive reception by audiences in the various countries they visited “ We were in Europe just before September and it was great, it’s really starting to kick off for us over there, we’re selling out small theatres which is cool.”

Once a duo, now a permanent trio DZ Deathrays have benefited from adding guitarist Lachlan Ewbank to the line-up boosting their heavy wall of sound whilst maintaining a less is more approach to their songwriting and live performances “It was rad being a two piece band but if you want to expand your sound it becomes a question of do you have to get backing tracks? Or do you just get another person to play? So we just got another guy and we got lucky because backing tracks are boring and I feel it’s cheap if you’re a rock band.”

The simple nitty-grittie they could get away with before is no longer possible as the band’s use of melodies and extra shredding meant an added guitarist would ultimately make them better for it. In some kind of unexpected trifecta for DZ Deathrays it’s now been 3 years playing as a trio as well as officially completing their 3 album contract deal, meaning going forward, all 3 of them will contribute collectively to their next studio album as well as any future recordings. In the meantime fans can look forward to the Best Night Ever on the Gold Coast that is sure to be a mighty farewell to 2018 and a wild rehearsal for NYE.