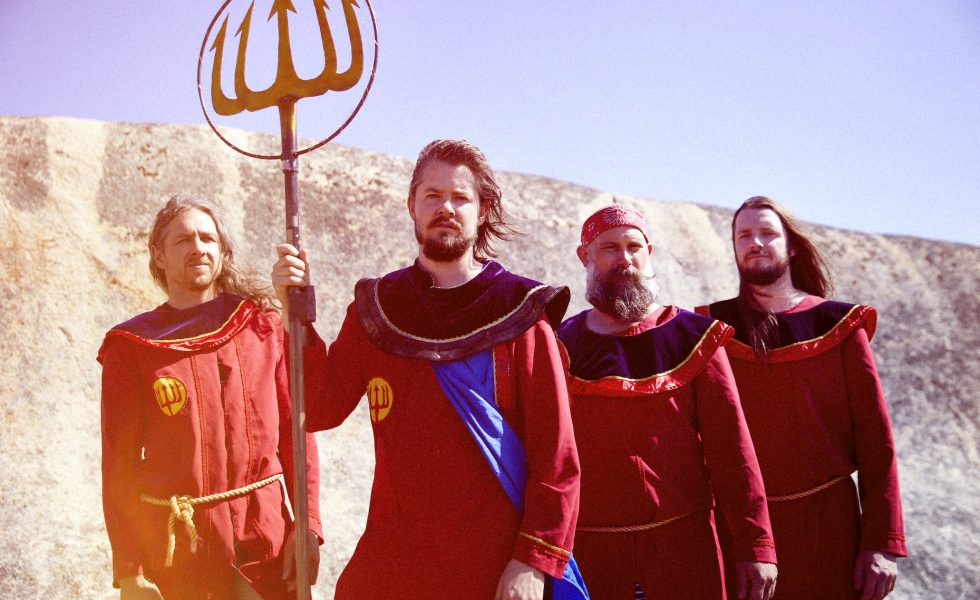 DR COLOSSUS // Beyond A Joke

Dr. Colossus describe themselves as a Simpsons-themed doom rock band.

While that makes them sound like a bit of a joke, Dr. Colossus is very serious about their music and their second album, I’m a Stupid Moron With an Ugly Face and a Big Butt and My Butt Smells and I Like to Kiss My Own Butt, is a well crafted, fun and riotously catchy album full of big rock grooves and silly songs, as guitarist and vocalist Jono Colliver is keen to explain.

Your latest album is the culmination of a lot of work for Dr Colossus.

It’s one of those things where, you start off a stupid project like this with very little work and the humour is first and it’s fun and easy to do. But after a few years, you start to realise you’ve got to take it seriously and put in some work if you want it to be good. We put a lot of hard work into this record.

There is quite a lot more to your music than just Simpsons gags. It’s not something that’s just been cobbled together.

I guess at the core of it is that most of the time, we’re trying to write good songs. They come from a love of writing riffs and jamming as a band and playing live. Lyrics and themes aside, we want to be a band that cooks live regardless. I guess in that way, it’s not just a gag. The gag is that we take the musical side so seriously with how ludicrous the lyrical content is. I think it’s the combo of the two that makes it funny. If the music sucked, it wouldn’t be as funny.

It’s reminiscent of so many great bands, desert rock and grimy rock bands. The music is sort of a separate entity in some ways.

I’m a massive fan of Turbonegro, who are an original band but their music has little nods to classics and they do little pastiches and references to recognisable classic rock. So it’s a similar thing with us. If a song that’s written sounds a little bit like something else, we don’t shy away from it. We embrace it and lean into it a little bit. I think it’s important that we know this sounds like this, we’re going to make that quite obvious. Because it’s a funny band, it doesn’t matter! We don’t care if it sounds familiar. At the heart of it, we love music. We’re massive fanboys off all that stuff. It’s just an excuse to worship those kinds of bands, and The Simpsons.

We don’t care if it sounds familiar. At the heart of it, we love music. We’re massive fanboys of all that stuff. It’s just an excuse to worship those kinds of bands, and The Simpsons.

Let’s go through the tracks one by one.

This is the first track. Tell us about this one.

This is our drummer Josh’s first foray into bringing riffs into the band. He wrote this, and Mike our bass player, always had this idea of starting this record off super fast and aggressive, out of character for us. Our last album started out so slow that this one should come out of gates with a super High On Fire vibe, so we lent really heavily on that reference and wrote a song about Krusty the Klown’s demise, and if the Sex Cauldron was a real place that he had frequented at his lowest of the lows. This song is based on Krusty’s grimy past.

This one was a single.

It’s a real stompy sort of a track, one that’s a real head-nodder live. The lyrics are about Homer forgetting to pick up Bart from soccer training. It’s basically just blow for blow that episode, and trying to line up every segment that reminds Homer of what he’s meant to be doing but he doesn’t get the message.

Joel our guitarist is also my brother, and he wrote the track musically and he came up with the idea of comparing Lard Lad to Sabbath’s Iron Man in this thematic sense, where he’s this giant steel machine that’s alone. The idea that if you just don’t look, and turn away, this thing will go away, and that kind of has parallels with Iron Man as well. So we just threw those two ideas into the cauldron and added a nice 70s rock section.

It’s sort of the opposite too, because Lard Lad is destroyed when people don’t notice him, but Iron Man became a monster because no one noticed him.

Yes! That’s a very poignant difference between the two. It’s eerily similar, that attention or the lack of it is the driving force behind the demon.

Just a big, old, stupid, riff number. I think the idea from Mike for this one is that the Simpsons move to Cypress Creek when Homer goes to work for the Glomex Corporation with Hank Scorpio. Cypress Creek sounds similar to Cypress Grove, which is the Clutch track that references the Clutch sound, so we thought we should lean into that style.

It’s basically the story of those Mendoza episodes rolling together. It’s a story of revenge and it’s chronological: whenever that show pops up on TV, those episodes all run together. So the lyrics are almost just exclusively from that. And then it has a soaring end section, when we go into this fiddly guitar section. That’s new on this record. I guess we’re just pushing ourselves to play a bit more fancy. We’ve watched bands like Hobo Magic, or those bands that are just extremely fast-fingered, not necessarily just ripping solos all the time, but their riff sections are just fast-fingered and together. So we figured we needed a section like that. Let’s justy go full Hobo Magic and blast a rock section at the end like that!

That’s another one that’s kind of leaning into the Deep South, kind of Clutch-y sound. It’s giving Apu’s character an extremely American voice, from his point of view. The chorus is sort of an homage to Werewolves of London by Warren Zevon.

If Warren was still alive, he would probably approve!
That’s good!

This is about one of the best episodes of all, and it has a really cool desert vibe.

It’s just an excuse for a nice, spacious end to the record. It’s pretty slow developing and I guess it’s our nod to that desert rock stuff that’s dirgey, repeating… We just pushed ourselves to use other instrumentation as well and build it up to a huge crescendo. That’s our musical version of that episode, and it’s a riff our bassist had kicking around for many years that he’s always wanted to harness and develop in that way. That’s like the jewel in the crown for the album, that one.

Purchase and stream Dr Colossus’s new album I’m a Stupid Moron With an Ugly Face and a Big Butt and My Butt Smells and I Like to Kiss My Own Butt here.