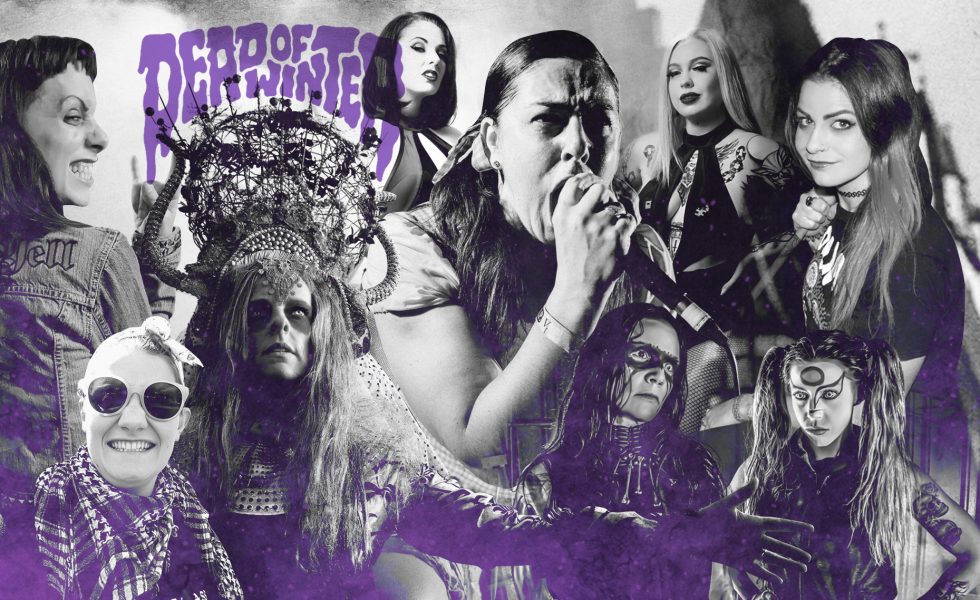 Music is for everyone. No matter if you play it, create it, sing it, go to see it, listen to it, live and breathe it.

The Dead Of Winter team are proud to bring fans yet another year of talented musicians, bands and performers all lined up to deliver stellar performances at this year’s Festival.

Let’s look at the women representing Dead Of Winter’s home, Brisbane, who have a name as being complete local legends in their own right.

Jodie Lawlor of Brisbane’s favourite party punks, Flangipanis. Jodie is an extremely experienced and talented performer and she is an absolute gem of the local music scene. Not only can she rock out and pelt out tunes with her stunningly strong and powerful voice, but she is also often seen out supporting other local bands. Always up the front cheering them on and being an all-round good egg. We love you Jodes and are proud to have you on the line-up again this year.

Roanne Spark, one of the two saxophonists from Brisbane’s much-loved punk outfit, Blowhard. Roanne has played with Blowhard for 28 years and in 1998 took on the role of co-managing the band. She also co-managed Splurt Productions with Blowhards frontman, the late and dearly missed, Rollo. Known as Club Splurt, they hosted a long list of musicians from the punk, rock and metal scene at various venues around Brisbane. Roanne is a true icon of the local music scene.

Alexis Tajlia of metal/shock rock/hip hop four-piece, Tai Sui. Alexis is the epitome of a strong and powerful frontwoman, passion pours out of her veins through her music and like Jodie, she is also known for her dedication to supporting others.

Tamara Dawn and Stacey Coleman of Brisbane’s longstanding and independent alternative rock band, HITS. Celebrating 15 years this year as a band, guitarists and vocalists Tamara and Stacey know how to rock up a stage and do it with an effortless level of talent and true rock style.

Kristen Norman of Brisbane’s indie/alternative rockers, Fight Ibis. Kristen has recently re joined the band after a small break away. Kristen is a self-taught drummer whose creative talent lies not only in music, but in her artwork too. Check out ‘Pudica’ on Facebook and Instagram to find her divinely quirky art.

Caity Kuhnemann of Brisbane’s dirty, groovy, beer-soaked blues rockers, Swamp Gully Howlers. Caity’s punchy, bluesy vocals and smooth moves create the perfect front for the band. Caity is an active member of the local scene too, putting on charity events and doing her part to support the local scene.

The divine Grace Drummond of Toowoomba punk trio, Something Something Explosion. With vocals that seem bigger than her body is capable of, swinging from soft and sweet to pelting out hard hitting punk screams, Grace was clearly born to do what she does and front her band like the punk goddess she truly is.

Jodie Maloney of Gold Coast hard rockers, Nowhere Else. The ‘Goddess of Rock’, Jodie is known to be seen jumping from stages to bars and on tables and whatever else she can climb on. Performance is in her heart and soul and seeing her perform live is forever a good time.

Moving on from our local women and onto some others, we move onto New Zealand, Moscow, Milan, Melbourne, Sydney and Perth …

Monshi and Om3n of New Zealand’s uniquely blended, non-genre conforming, metal, horrorcore, industrial, dubstep, DnB rockers, Kaosis. Monshi and Om3n are the stunning, creative, talented and beautiful ladies that rock out as part of this line up of talented and expressive souls. DJs, producers, hype-girls, MCs and fire performers. Monshi and Om3n’s roles within the band are a huge part of the overall energy that draws you in to the magic of Kaosis.

Olga Svetlanas from one of the hardest hitting thrashcore bands ever, all the way from Moscow and Milan, Svetlanas. Olga is powerful and unforgiving in her performances, in your face and full of passion, she delivers her music in a way that leaves you feeling as breathless as if you’d been up there pelting the songs out yourself.

Jelena Goluza of Melbourne’s hardcore outfit, Outright. Loud, bold and beautiful, Jelena defies gravity with her stage jumping performances and all while pelting out vocals to keep up with the pace of the hardcore tunes delivered from the rest of the band.

The Imperial Priestess Screaming Loz Sutch of Sydney’s occult rock and rollers, The Neptune Power Federation. Screaming Loz’s vocals are one thing but her costume is another thing altogether. She will capture both your ears and your eyes with her equally outstanding vocals as well as her stunning outfits and make-up.

Stella Leung of Sydney’s doom metal/stoner rockers, Potion. Stella brings the divine darkness of doom to the ladies on the line-up for Dead Of Winter with her deep and heavy bass tones and clear passion for her music.

Simone Dow, guitarist for Perth’s progressive pop metallers, Voyager. Simone rocks out hard and plays with a grace combined with an aggressive passion and commitment to her position in the band. Her love of playing live is always evident during her performances.

Along with our talented musicians, we also have our brilliant sideshow performers that are equally as important to our line up and will bring gasps of adoration and enjoyment with their entertaining shows and displays of talent and beauty. With Brisbane’s stunning Dahlia Dyer, burlesque performer, Lila Luxx, Dolly De Ville’s pole dancing and the heart stopping performance from the Heart and Dagger Sideshow girls, Frankie Felon, Madeline Glasseater and Lilith Revere. All up it is a sure thing to say that what the ladies will bring to the line-up for Dead Of Winter this year is truly something else!