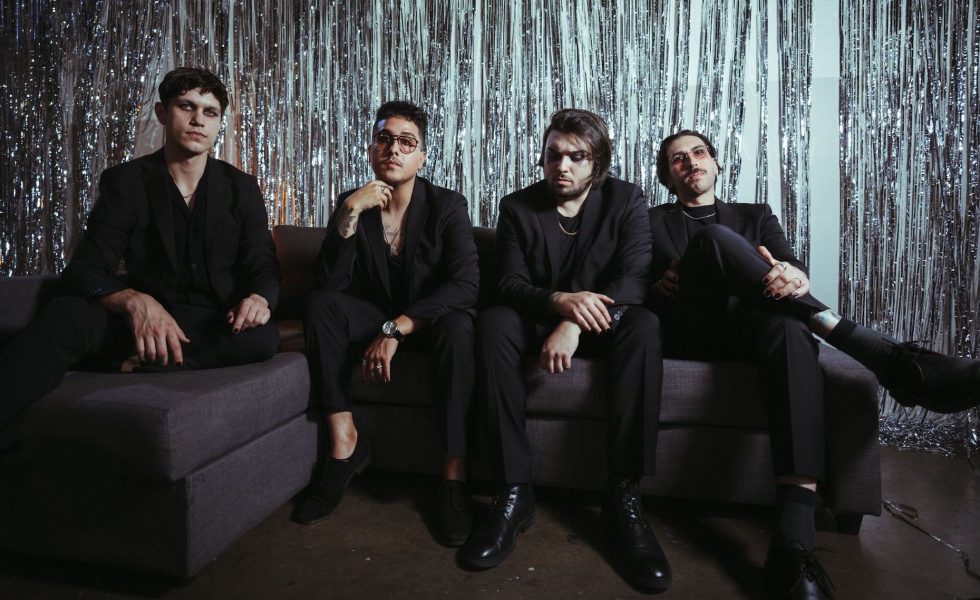 We got Dayseeker’s Rory Rodriguez on the line just before the band dropped their fifth record, Dark Sun.

MORE: NOFX: Fat Mike Chats Double Albums, Being Ghosted By Blink-182 & The Emotional Journey For The Last Ever NOFX Shows // DUNE RATS: Dance Lessons and Thinking Outside The Box REVIEWS: SLEEPING WITH SIRENS: Complete Collapse // blink-182: EDGING // FREEDOM OF FEAR: Carpathia // ARCHITECTS: the classic symptoms of a broken spirit // SLIPKNOT: The End, So Far // THE GLOOM IN THE CORNER: Trinity // THE COMFORT: Experience Everything. Live And Die. // DAYSEEKER: Dark Sun

It’s an incredibly personal work, particularly for Rodriguez, who drew on his experiences, the passing of his father and his connection with his daughter.

We dove into how it came together, the band’s penchant for genre-bending and when they’ll next visit our shores.

Hysteria: We’re sure it’s the question you’ll be asked a million times. How did it feel putting so much of your heart and experiences into these new tracks? Was it daunting? Was it scary? Tell us about it.

Rory: I wouldn’t say it was scary. For me, songwriting has always been more of a cathartic process. It’s nice that we get to make a living doing this, but I would do songwriting for the rest of my life because it helps me cope with a lot of things I go through. Obviously, my dad passing away, but also various things that have happened in my life over the last couple of years.

I feel blessed that I have that outlet to get my feelings out. It’s not scary writing a song, but it can be when it finally comes out because then you feel like something really personal to you, that you’re proud of, and you think is good, is on display for the world to critique or say, it’s not as good as your old stuff. There are definitely things to be scared of, but it also feels nice to get my emotions out, you know?

Absolutely. We loved the new album, but we want to touch on your point about people critiquing music, saying it’s not as good as the old stuff.  With Dark Sun being so personal, did that weigh on your mind at all?

We’ve been lucky. We have friends in the scene, and we see bands put out something new, and it’s like 90% of people have negative things to say and 10% nice things. For us, it’s quite the opposite. I really only see a couple of negative comments here and there. Most of the responses are pretty positive. It’s usually just the metal only people that are mad that there’s not as much screaming or riffs and stuff.

But the jump in our popularity and how well things started going for us definitely happened with Sleeptalk, where we took steps towards being more of a rock band. Those comments bothered me a lot more when I was younger, but now I feel people have their preferences, and it’s okay if they don’t like the new stuff, they can still listen to the old stuff if they want to.

For me, songwriting has always been more of a cathartic process. It’s nice that we get to make a living doing this, but I would do songwriting for the rest of my life because it helps me cope with a lot of things I go through
[ Rory Rodriguez – Dayseeker ]

We love how you continue to break boundaries and shift the idea of what heavy music should be. Tell us why that creativity and diverse sound is important for the band.

We honed in on pop structure songwriting. We stepped in that direction with Sleeptalk. Our most popular songs off that album were the ones that were structured simply, so we focused on that with this new record.

Structurally, the songs on Dark Sun are written better than those on Sleeptalk. We didn’t add anything to a song unless it made sense. We didn’t let parts run on too long. In the past, we’d write ten parts for a song, and then we would lose the listener a minute and a half in.

We’re also leaning more into the synth-wave sound, with the 80s retro influence and synthesisers. I’m surprised there aren’t more bands in our scene trying it. There are a lot of metal and post-hardcore bands just sticking to the old stuff. There’s a nice untapped market for this retro 80s sound paired with more aggressive rock. I’m happy with what we created.

What was the writing and recording process like? Did you set aside a block of time, or was it a continuous thing?

With our older records, we would usually go somewhere for a month and hammer it out. I actually don’t know if that’s the best way to do it. You definitely start getting burnt out.

Our producer is local to LA. It’s nice; we can work with him a couple of days a week, have some time off, sit with what we’ve worked on, and come back. Sometimes you work on something all day. But then, your ears get fatigued, and it’s hard to tell if what you’re working on is good or not. Listening to a song with a fresh set of ears the next day makes such a difference. It’s easy to dissect and see what needs to be reworked.

We worked on this record for like a year, and a lot of the songs changed quite a few times. Dark Sun is a very 80s / PVRIS / Charlie Puth kind of track. And it’s funny that we tried to write it to be another Neon Grave or Dream State. It was meant to be more of a metal/rock track. And then we put vocals in and tried to force all these heavier metal riffs and parts into it. We realised that it was actually making the song worse.

Without Me was a song we wrote in like three or four hours. It pretty much stayed the same. And then there were others we rewrote five or six times. I’m thankful we did that, though. I just don’t know if writing an album in a really condensed period is the best way to get a solid collection of songs together, you know?

It must’ve been amazing working with Daniel Braunstein. How’d you find that?

He’s the best. He did Sleeptalk with us, and I’ve also worked with him on the Hurtwave project. He’s the best producer I’ve worked with. He’s a really positive guy. He challenges me and the band for the better. Even if I disagree with something initially, I’ll always appease him and try it. Sometimes he’s right, and sometimes, he’s wrong. But it works both ways. He lets me challenge him too.

He had a lot to do with the soundscapes. Even if we wrote melodies on the piano, he’d find a really cool synthesiser. Most of the tracks have three to four different layers of synthesisers going the entire song, but they’re just tucked really low in volume. Then we also have the core elements, guitars, keyboards, drums, bass, and all that stuff.

He’s done great work with all the bands he’s worked with. He’s finally starting to get the credit and the recognition he deserves. I don’t see us going to anybody else besides him for the foreseeable future. I’m happy to call him a really close friend too.

It changes all the time. I like Crying While You’re Dancing a lot. We just put that one out. It’s not a typical radio single. But there’s something about it that’s really special. I just can’t put my finger on it.

When we were writing a lot of the instrumentation, the chords we picked reminded me of the likes of Brand New, Taking Back Sunday and Jimmy Eat World. It was cool, and we felt like we started writing not as a metal band trying to be soft but just as a rock band.

Give us some memorable moments from your recent Oz run with Thornhill.

It was great. We did a headliner there at Stay Gold in Melbourne. We always keep low expectations with that stuff because, honestly, we felt like people didn’t care about our band for a long time. Feeling like people care now is really cool.

We went into that show with very low expectations. We thought we would play to like 80 or 100 people. And it was a 400 cap, and we almost sold it out. I think there were like 375 or 380 people there. Seeing people care enough to come out and support us was very humbling. It was a blast. We’re supposed to come over again. In the summer (Oz winter) of next year. We have yet to announce it, but we will soon. There will be some bigger bands, so the venues will be a little bigger.  I’m excited to come back over there and play again.