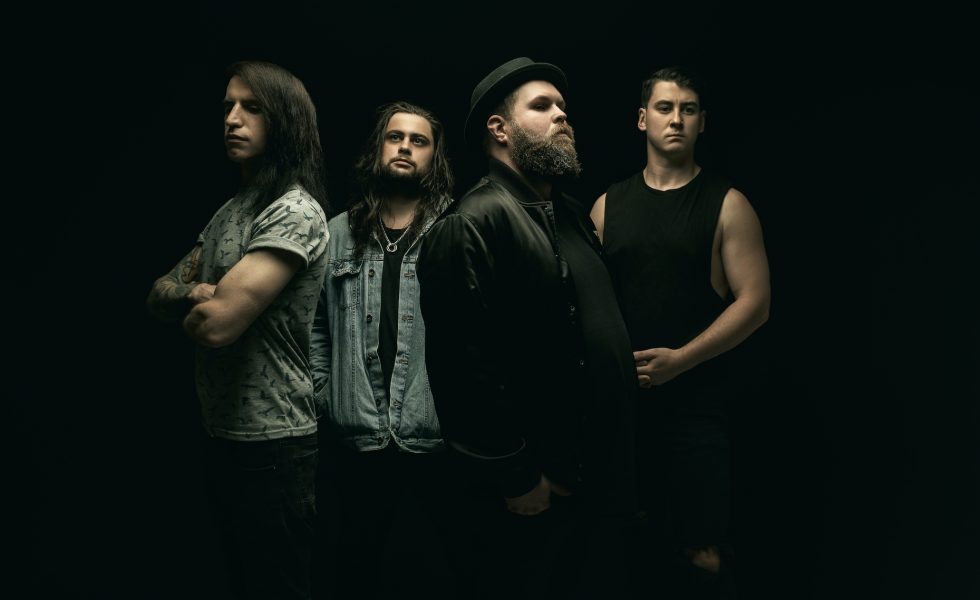 Introspective musings and catchy hooks are two things that have gone hand in hand on the latest Colour and Shade release, Hostile Grounds.

Following on from their 2018 self-titled debut, the EP is another welcome serving of anthemic, metalcore. Before it officially dropped, we caught up with Zak Knight (guitar and vocals), Tim Greenwood (vocals) and Mat Purcell (guitar) to chat about what inspired it all.

Give us a history lesson on Colour & Shade.

Zak: The band started at the end of 2016. I had left my old band and had a lot of music with me that I wanted to continue working on. And then I found out about Tim through a mate of ours, Maurice.

Tim: I caught up with Maurice. I had just come out of a band too, and he told me about Zak. I found him on Facebook, and I think his first post asked if anyone wanted to join a band.

Zak: Initially, I wanted Tim to play the guitar! I had eight or so songs when we first got together, but we added another five after working on some stuff.

Zak: (laughs). Every once in a while, Tim decided to sing Pierce the Veil or Memphis May Fire. After that, I was like we don’t need to look for a singer for the band. I kind of forced him into it because I can’t sing. Then we went on to find another guitarist. We got Mat, who happened to be one of Tim’s students.

Tim: We were looking for drummers. My brother in law said he knew a guy that was keen to jump on, so he passed on his number, and we caught up for a coffee. That ended up being Graham King. From then, he brought on our bassist Chris (Heyward). He’s an absolute monster, one of the best bass players we know.

Zak: He’s underused in the band for sure. He’s a trained jazz player, and we’ve got him playing rock and hardcore. And as much as Tim doesn’t play guitar in the band, he’s a blues teacher. He actually played all the lead guitar on our first album. And then on the EP, it was mostly Mat and Me. You can definitely hear the difference.

Going back to our first album, Mat, Chris and Graham joined, and Tim and I said we already had it done. We had previously booked in time with Troy Brady (formerly of The Amity Affliction), and Mat rocked up to be part of the experience, even though he didn’t have much of a chance to play anything. Three or four months before we went in to record, I told Tim I would be the screamer. I had some lessons with David De La Hoz from Belle Haven, I’d never really been a vocalist before, but it went pretty well. We learned a lot from that record, and it helped me decide to produce as well. It’s funny, but we became a full band after it dropped.

Tim: We also did a cover of 5 Seconds of Summer’s Youngblood, and it’s led us into our current sound. With our new EP, we recorded it all with Zak. That cover paved the way for that. It showed us what we could sound like as a band.

Zak: The EP was written between the five of us, and then I produced and mixed the whole thing. Some of the singles have already been released, including Equilibrium which has been well received. We were really glad about that, especially considering I’d built a choir out of me, Tim, Tim’s sister and Mat for it.

We feel a lot of bands are doing what they want to do instead of conforming. Because of that, the scene is changing. We’re seeing better music because of it.
[ Mat Purcell ]

Listening to the singles from the EP, it’s struck us how varied they are. Tell us about where you drew your inspiration from.

Tim: Pretty much everyone in the band contributed to the EP; it wasn’t just Zak and I this time around. I feel that’s where those varied sounds came from. We have influences from Architects to Don Broco, to your much poppier acts like Emarosa. We tried to find the line between heavy guitar riffs and catchy choruses. We learnt that from our first experience in the studio. If the chorus is catchy, it helps the whole song.

Zak: In terms of the influences, it helped to embrace the things that were a little heavier with a mental approach instead of a literal one. While She Sleeps are a big influence for Mat and me. They have this larger than life sound in their music, and it carries on to their vocals and the message they deliver. Recently, I’ve been producing some trap and pop stuff too, so I’ve found inspiration in a lot of different places. We played to Tim and my strengths vocally on the EP. Tim can sing high, and I can scream aggressively. We decided to focus on those two things on the first album, but we learnt it wasn’t the best idea. This time around, we got smarter with melody choices and tones.

Tim: We put everything in the right key this time. That’s all it was (laughs).

Zak: Learning all the production stuff helped a lot. I learnt what I could do to help the band sound more like ourselves. We were able to do things like put clean guitars almost everywhere in a song, making things sound heavier. Going back to the influences, we love a lot of music, and we don’t just want to do one thing and stick with it.

Tim: Unless you’re Mat and only listen to Metallica (laughs).

If you think about some of the bands that are killing it right now, Like Bring Me The Horizon, that’s really reflected in their sound.

Mat: Zak and I were speaking about that the other day. We feel a lot of bands are doing what they want to do instead of conforming. Because of that, the scene is changing. We’re seeing better music because of it.

Zak: I’ve made it one of my missions to turn everyone’s ideas into something. We went into this EP wanting every idea to be heard, and that’s something we’ll be carrying with us as a band going forward. As much as the EP is coming out soon, we did it in 2019, and it’s 2021 now! So we’ll definitely have that philosophy in mind for our future releases.

What held the EP back?

Zak: The pandemic definitely impacted things, especially being from Melbourne.

Mat: We filmed the music video for Therapy just days after being allowed out of our houses. We were quick to jump on it, which ended up being good because we did end up getting locked up a few more times.

Zak: It was ages before we could film anything for Equilibrium. It was just hard to get things done as a band because we couldn’t see each other.

Mat: That was the worst part. We were forced to do nothing. We were so enthusiastic, but we just had to wait. We wanted to release this music, we had it sitting there, but we couldn’t show anyone.

Tim: As a band, we had to decide if we should just release things or wait. We had invested so much time and energy into the songs, so we didn’t want to release them to Spotify, just to have them swallowed up by the machine.

Mat: It was our crossroads moment.

Zak: It was interesting. The EP was ready in April, I think.

Mat: I think it was January or February.

Zak: No man, I was still mixing it in February (laughs). You guys all wanted it done, but we had songs with 120 vocal layers on them, so I said you had to be patient. We didn’t cut any corners with the production, that’s for sure! I know Mat went to a lot of effort to get his solos right, and Tim and I spent a lot of time in the studio working on our vocals, even though it frustrated him plenty of times.

So if you had to describe your sound to your nan, what would you say?

Tim: Mine would just be loud (laughs). My grandparents just think it’s noise. They do still say good job, though!

Mat: I would tell my nan that she’d love us and should buy all our CD’s and merch. She would do it!

Zak: If mine was still alive, I would say it’s loud, to the point and hopeful. Then she’d say, that’s fantastic, can you get me a cup of tea?

With the EP out, what else does the band have in store for this year?

Mat: For now, we’ll say Colour and Shade will grow and adapt a lot over the next year. We have a lot planned, and we’re very optimistic.

Zak: There will be more new music, especially now that we can do it in house.