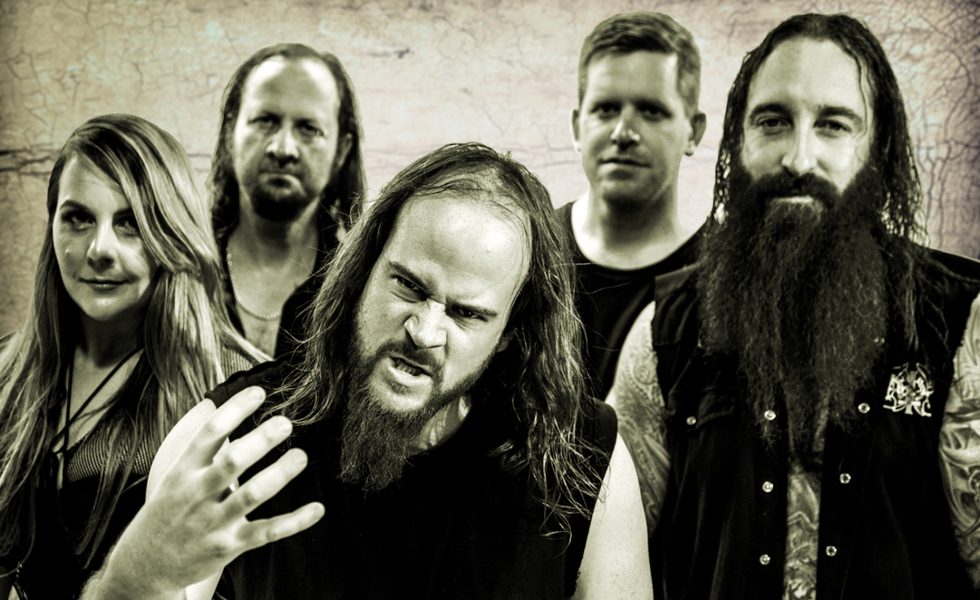 HARD NOISE: CLAIM THE THRONE // Philosopher Kings of the West

Jan 24, 2018 / WORDS Mike Hohnen, Hysteria Radio and The Editor / On Desolate Plains it's the fans who love to raise their devil horns in triumph

Bands such as Claim The Throne are a compelling argument that there must be something in the water over in Perth. The band have now released their latest body of work On Desolate Plains. And there’s a lot more going on than your usual heavy music album.

The release ebbs and flows between so many different universes, it’s hard to name them all. From delicate flutters of notes and chords, to cyclonic assaults of them, airy ethereal vocals, to demonic growls; all happening simultaneously, yet separately, and working like magic.

On Desolate Plains it’s the fans who love to raise their devil horns in triumph, but also for those who like to get lost in intricate patterns of clever song writing. Following the album’s release we caught up with main man Glenn “Dysie” Dyson.

Listen to the entire Claim the Throne interview on Hysteria Radio – 24/7 metal, punk, news, and interviews!

Hysteria: This album is full of some very interesting heavy metal. How’s it all been since you released it?

Dysie: It’s nice to hear that. I’ve kind of got other people saying the same thing. Um, it’s because we are trying to do something different. You know so many bands out there sound the same. So, I know we started off as more of a folky, metal band. But now we’re sort of digressing from that a little bit. There’s still elements of it but, we really are trying to do something different. So, I’m glad people are hearing that. Cool, and now I’ve forgotten what you originally asked.

[Laughs] just to know how it’s gone down with the fans, because sometimes this can be overwhelming. I imagine a lot of people had that similar reaction to me, of just being like wow this is refreshing, it’s interesting, it’s not dumbed down. Was that kind of the mass opinion of it?

So far all the reactions have been really positive from the people who’ve reviewed it, to people who obviously aware of us with our stuff in the past and are now still buying it, which is good. And I think that people can see the progression from each album. And I think we maintain enough of the folky stuff to keep those kind of people happy. But we’ve certainly got a lot faster and heavier. In some respects Jesse playing the keyboards softens the blow a bit, but we haven’t had anything negative.

And we just were fortunate enough to tour with Wintersun in Australia, and then within Japan as well. Had six shows there, which was great timing because the album was released only a few weeks before that. We’ve been to Japan three times now, and it’s always a thrill seeing people walk up in Claim the Throne shirts.

Listening to the album, it seems like you guys have all managed to somehow seamlessly piece all of those different passions together. Is that kind of how it works with Claim The Throne?

I think the last album Fortune Flame was a little bit more difficult to write. This was the first album that this line up is written together. And it’s the band has been stable now for about seven or eight years since I joined. I think with this one, we’d already written an album together; and this time it would all go a little bit better as players, and songwriters, and we wrote a lot at home individually. We’d map out stuff on Guitar Pro and email to each other and learn the riffs, and then we’d go jam on them.

So, we also wrote a bunch of songs each. And then we went in to a studio for a month, and just jammed them out, and then changed what we wanted to. And I guess it was more of a everybody contribute to this album. Where was in the past it was mainly Kevin maybe, or Jesse. We do all listen to a lot of the same stuff. So we all listen to a lot of similar stuff, but also a lot of different stuff. So I think the album is a reflection of each of us contributing, so. And it worked really well, there wasn’t too much we got stuck on. There weren’t too many sort of writing blocks or anything. It just seemed to be really natural and it all came out really well.

We’d rather be productive, you know. Even if only 20 kids rock out, I’d rather be doing that, and try and inspire maybe one or two of them to do something than sitting at a pub drinking beer.
[DYSIE]

Let’s talk about that…opening up the band to a democratic process sounds like a beautiful thing; but sometimes it can just be fucking frustrating when you’ve got someone just constantly trying to push their shit on to the album and no one else wants it. So how did you find that process? Do you see yourselves going back to the old way?

No, I think it will continue what we’ve done here. Definitely, it was so smooth and everyone’s ideas that came in were all good. There wasn’t too much that was put on the throw away pile. And even then we didn’t record everything that we wrote. We’ve got a bunch of ideas that we’ll keep for the next album.

It was a case of just a few little modifications here or, just change the riff slightly, write this in, or take that out, and what have you. It was all really natural. I don’t think there was any kind of bickering, or people pushing things.  It was good. Not stressful at all. We’re all great mates outside the band, so it was a lot of fun.

I’m so glad that you guys got that, I mean jeez we’ll have to work you harder for that next one if you had such a good time.

Yeah, I mean there was a lot of ad lib stuff too.We jammed on certain things but once you get in the studio and we messed around of a few melodies, and changed a couple things; and things were changed in the studio too. All the vocals, we tried a lot of different vocal techniques this time. And there is some absolute guttural growls on there as well.

Oh yeah, out of nowhere as well, the gates of hell open on this one.

Yeah, and high pitch screams, like we were channelling Marduk and things like this. Of course Jesse’s beautiful voice coming out at the top and softening the blows a little bit.

Going through your tour dates, you have some all-ages workshops. What does that involve?

It’s pretty much talking about any aspect of the music industry. If it ends up being younger people, or older people for that matter, anyone is more than welcome to come along. And if they want to learn about, I guess writing a song, or how you go about writing a song, whether it’s asking a question about me and the band about how it works and how do you book a tour. I mean we are a very DIY band. We’ve made a lot of things happen.

Between the five of us we’ve got a lot of experience, and knowledge, and different things. Ash records everything. I have no idea about recording, but Ash does. Cab is good at podcasts. Jesse’s a music teacher. We’ve also got some local guys coming on board. Playing local bands, and run studios, and booking agencies. So it’s trying to get the community involved. Coming from Perth we can’t afford to fly back, or drive back obviously. So we don’t want to spend a whole week doing nothing. We’d rather be productive, you know. Even if only 20 kids rock out, I’d rather be doing that, and try and inspire maybe one or two of them to do something than sitting at a pub drinking beer.

I think when you go through that knowledge, you tend never to forget it. It’s great you guys are actually taking the time out to help people.

If it goes really well then it’s something that takes off, on the next tour we could look at doing a couple more. So there is a little bit of an experiment. Jason, I think he is based in the Central Coast; he books all our stuff. We’re going to try and get a couple newspaper interviews, and maybe a local radio, and really try and get this whole community vibe about it. And it’s certainly not about making money or anything like that. It’s in a rehearsal room, and it’s just we’re only charging five bucks a person just to cover the cost of the room, and to hire some gear.

We’ll see how it pans out, whether people will sort of get involved. That’s what we want, local people involved to try and we’ve got a couple young local bands playing, studio house bands. So we will start up with a Q & A, that will last for half an hour, 45 minutes, an hour. As long as people ask questions afterwards, each band will play a small set each. You know, there’s a couple of kids who watching some bands play and makes them pick up and instrument. It’s cool.