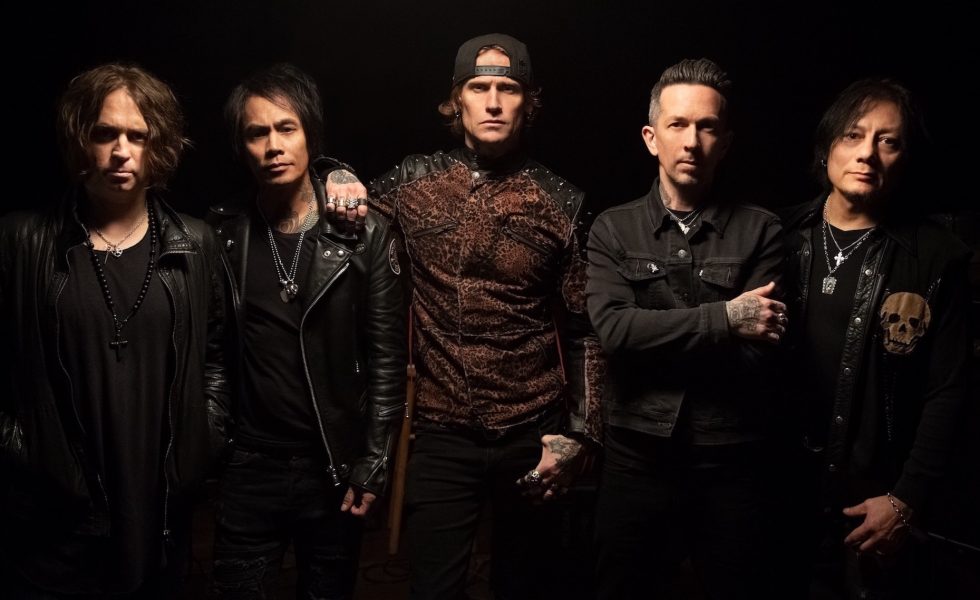 BUCKCHERRY // On The Warpath

Josh Todd has led California rockers Buckcherry since the mid-90s, through an array of line-ups and a string of US Top 40 Albums in the following decade. The band’s latest release, Warpaint, is the first without founding guitarist Keith Nelson.

Currently on tour through the US, Buckcherry will soon be bringing their swaggering rock and roll show to Australia for their first headlining shows since 2016. Pairing up with them for the tour will be Swedish street rockers Hardcore Superstar. Todd promises that it will be “a good package of rock music”.

We hear a lot these days about the death of rock, or at least of its ill-health, but there are still plenty of bands around, like Buckcherry and like Hardcore Superstar, that are out there to be found.

There’s a lot of stuff going on, you just have to search for it. This marks twenty years for Buckcherry, and we’ve never been a mainstream rock act from the beginning. It’s hard to have longevity in this business, so I’m really proud of that.

Given your history, I’m sure there’s been plenty of times when you’ve just thought about throwing it in, and yet here you are … your eighth album.

Many times. But we just keep moving forward and creating new music and I think that’s the key—always remaining teachable and getting on with it no matter what. We’re always focused on a new goal and looking forward, and that’s been the key to Buckcherry’s longevity, for sure.

You’ve had the chance to reflect on Warpaint now and you’ve been touring on it for some time, so what are your thoughts on it overall and how does it fit into Buckcherry’s catalogue?

I truly believe it is one of Buckcherry’s best records. We worked very hard on it. We wrote about thirty songs for an eleven song record and it’s an amazing listen and I’m so proud of it, to do it at our age and at this point in time, that’s even cooler. That being said, it’s really reminiscent of the songwriting process that took place right before 15. We had a few line-up changes, it had been three years since our last record and we knew we had to make the record of our career. For Stevie and I, it was really a labour of love. We’ve known each other for a long, long time. I’ve been friends with him since I was 19, and this was the first opportunity, the first real opportunity he got to write on a Buckcherry record. He never got to do that in the past, because of the politics in the band at the time. He’s been in the band since 2005, so it’s long overdue! And we got to write together on the Josh Todd and the Conflict album Year of the Tiger too, so we had a lot of songs already when it came to the Buckcherry songwriting process.

When I step on stage now, I have to really bring my A-game. Not that I didn’t have to before, but these guys are really accomplished and it changes the whole dynamic of Buckcherry.
[ Josh Todd ]

Did it feel different working with Stevie instead of with Keith? Was there more of a collaborative process with the other members?

The majority of the record was done by Stevie and I, whereas in the past the majority was done by Keith and I. It’s the same process, I took on the role as lyrics as part of my contribution, and Stevie did a lot of the music. It was great.

As you pointed out, Buckcherry has gone through a line-up change once again. Both Keith Nelson and drummer Xavier Muriel have departed, so how has it been to bring fresh talent into the band after such a long time?

It’s just upped the mix. These are the best musicians Buckcherry’s had. The best line-up. Adding Kevin Roentgen and Francis Ruiz in the mix—these guys are really good players, you know! And good singers! Stevie’s a good singer and Kevin’s a good singer and a great guitar player and he also produces as well, so when I step on stage now, I have to really bring my A-game. Not that I didn’t have to before, but these guys are really accomplished and it changes the whole dynamic of Buckcherry. As far as changing the Buckcherry sound, Stevie’s been in the band a long time. He knows exactly what makes it work, and he’s a really well-rounded musician and guitar player, and I don’t want to compare him to other people. He’s his own guy. But as far as the level of musicianship, it’s all elevated. And that’s what’s happened historically with Buckcherry with line-up changes—it’s always gotten better and better.

So it sounds like there’s a very strong bunch of people in there around you now, and, as you said, something to help you lift your own game, which is something that a frontman needs.

Absolutely. You’ve got to have people around you who are your level or better. That’s how you get better.

Bands really need to be on tour now in order to keep going. How is the latest round of touring going for Buckcherry?

It’s been great. We’ve been on tour since January and the record has been really well received. The radio song Bent has been doing great, we’ve been doing Right Now live, and we’ve just started playing The Alarm. We played that for the first time the other night and it was amazing.

It must be a great feeling to throw new songs into the set and have them work. After you’ve been around for twenty years the fans have their real favourites, so, not only is it a change for you, it must do your heart good that newer songs can work so well.

Absolutely, and sometimes they don’t work, too! It all depends on how you put it in. I’m always making the setlist every night, and you have to slot it in according to different tempos and build the set dynamically. Sometimes it’s not the song, it’s where you put it in the set. I’ve had a lot of experience with it and we usually get it right, but it’s nice to see a song that nobody’s heard, that hasn’t been on the radio and to watch them react to it organically the moment they’ve heard it live. That’s always fun for us.

Changing the setlist every night isn’t something that every band does, but it certainly makes it a more interesting experience for the audience when they don’t quite know what to expect from night to night, especially for those who might come along to more than one show.

That’s what we try to do. Of course there’s always going to be songs we have to play. There’s always going to be Lit Up and Crazy Bitch and Sorry, and those songs, you know. Everybody wants to hear those. You’ve got to play them. So we’ve got, like, a core of the set that’s got to be played every night, and we rotate about five or six songs every night, and that’s what makes it interesting for fans that are coming to multiple shows. And we have a lot of people that come to multiple shows, which is awesome.

That’s part of the reason you do it, really, isn’t it: to see those same people coming along to show after show every night.

Yeah. We call them our Frequent Flyers. When you see that you really know you’re having an impact on a lot of people, and it means a lot to us because that’s when you know the hard work really pays off. Because there’s a lot in this business that’s really gruelling: the travel, making records now and not seeing a huge return on your records anymore is really hard because you work your whole life in crafting songs. It takes a lot of time and a lot of effort in writing bad songs to get to the good songs. All that being said, when you step on that stage, all that goes away and you remember why you did it in the first place.

Do you think people are starting to get the message about how hard it is for bands now, or hasn’t there been any change at all?

No, I don’t think people really understand it. It hasn’t affected the hip hop and pop genres as much as it has affected rock. But, you know, what can you do? You’ve got to move with the climate and one thing that’s never going to change is that people still want to get out of the house and have a live experience, so I’m really grateful that we built our reputation on our live show and we have a great worldwide audience that we always get to go back to.