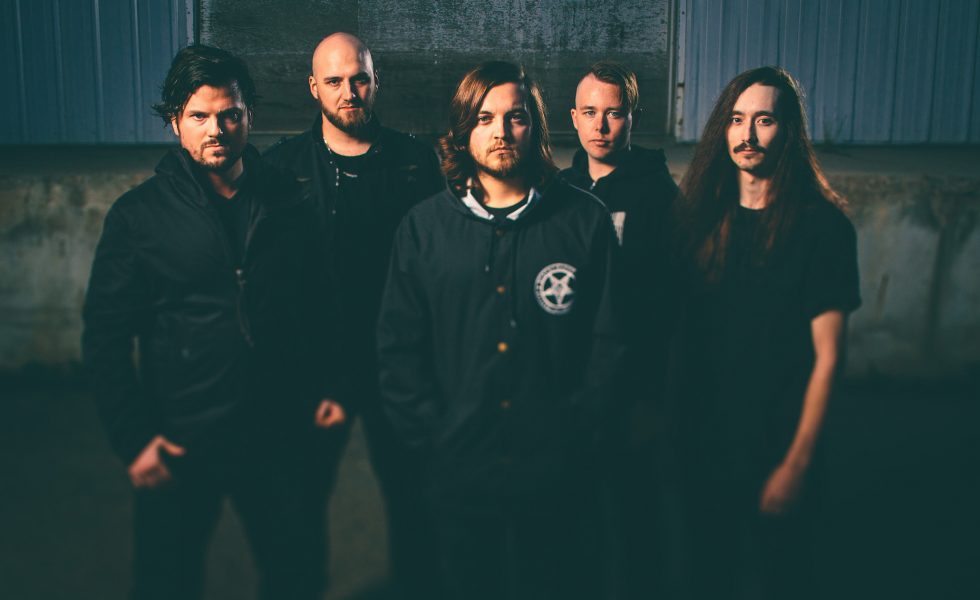 The short days and long nights of the Canadian Autumn conjure up imagination and the possibility of changing one’s perspective during cold and lonesome days of brief light and long-lasting darkness.

Alberta’s, metalcore troubadours Arrival of Autumn know all too well the bleak and drastic changes of seasons and use it as a catalyst to create some brutal and exuberant compositions. The quintet released their second full length album Harbinger and their first on the Nuclear Blast label this March. The album takes elements of metalcore and technical death metal fusing these styles seamlessly together.

“We’ve taken influences from old school thrash metal and groups like At the Gates, Killswitch Engage and Trivium”, Arrival of Autumn vocalist Jamison Frieson tells Hysteria “they were all bands we were into from a young age and as we kept writing music that’s how our sound matured. We thought to ourselves—if we could do it right lets be the heaviest and most melodic band at the same time.”

The five members of the group all grew up together in the small city of Grande Prairie, a place where youth can get easily bored and follow destructive paths but these young gifted players found music grounded them and spawned an outlet to express their life values through in-depth lyrics and heavy melodic tunes. “It was difficult at times growing up in Grande Prairie, myself and our guitar player Brenden Anderson met at a really young age and we were always separate from the crowd, we were the metalhead music nerds and we were ok with that. We decided we wouldn’t go to the parties every weekend and as we started to play music in public, we started to meet people in that way. Our group of friends were all like minded metalheads and we just thought it was better to occupy our time in playing music and that definitely helped in keeping my sanity.”

… we were the metalhead music nerds and we were ok with that.
[ Jamison Frieson ]

After the band reached out to producer Jason Suecof whose clients include Trivium amongst many world class metal acts, they spend a couple of weeks recording a few songs with him and made some high-quality demo recordings. This allowed them to present their music to potential suiters and eventually the recordings caught the attention of Nuclear Blast records thanks to the recommendation of Jason himself who ended up producing their latest album Harbinger. “He definitely helped us achieve more of what we were capable of, he pushed us to be better and brought a lot of ideas to the table. When we came forward with an idea for him, he would tell us if it had potential but was not quite ready and would make us re-write something in order to make it better. If you impress Jason you can probably impress the whole metal community (laughs).”

Not only is the album well produced and has a purposeful sonic direction, the lyrics have philosophical leanings that are directly inspired by movies and TV shows like Mad Max and Westworld and ponder the relationship between ourselves and the world views that we are taught from a young age, “The underlying philosophy of the album is to be true to yourself, realise who you are as an individual and what you want to stand for as well as what is worth fighting for and to not kid yourself. We try to have a positive impact on the world around us and we chose the album title Harbinger as a sign of things to come. Lyrically we’re approaching topics like indoctrination, ideology, power systems and the negativity that is constantly reigning down on each and every one of us and how it affects us individually.”

Their collective curiosity for big subject matters boils down to not taking anything at face value and not settling for one world view or ideology. Amongst themselves they share similar values but are willing to discuss and question them and be open to learning from other people whilst seeking out knowledge and information for themselves. They are also excited to hit the road and play the new album in front of their devotees and will hopefully do a long journey down to Australia sometime in the not too distant future. In the meantime, Harbinger continues to grow their international fanbase and is showing to the world that music with ideas matter now more than ever.