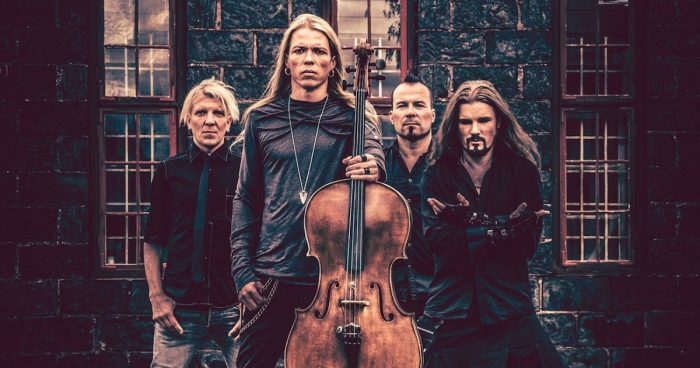 A mere transient moment rendered in music can portray the seemingly eternal. Expressive and profound, the music of Finnish quartet Apocalyptica invokes this dramatic ability to transcend time and scale.

As the cellos dance between notes, the primal intricacies of the constellations connect with the minutiae of cellular structures, distant senses of the past entangle with yearnings of the time in which we stand. In the wake of re-releasing the world renowned …Plays Metallica by Four Cellos [1996], Apocalyptica have re-immersed in their creative fires to produce their ninth album Cell-O, a phenomenal instrumental of metaphysical dimensions.

“Of course it is a very different approach,” cellist Paavo Lötjönen says as he reflects upon shifting from …Plays Metallica to writing for Cell-O. “It’s really challenging to compose our music, and create something from zero, but really inspiring as well, but challenging and demanding, because we want to make it perfect of course, for our listeners. This time we wanted to create a totally instrumental album. Basically, we weren’t stuck to anything. We produced this by ourselves. We invested all the money by ourselves. It’s really like an independent album. We wanted to serve our hardcore fans and offer something for them. It’s close to our hearts, the result is really progressive and there’s a lot of songs in which the song structures are not stuck to the normal ‘chorus/verse/chorus …’ so this is arty farty for our hardcore fans.”

There are two parallel roads in Apocalyptica. We have always created instrumental music, and on the side we have also wanted to have songs with singers. They have something similar, but they are two different dimensions.
[ Paavo Lötjönen ]

On why Apocalyptica decided to write purely instrumental music for Cell-O, Lötjönen explains, “We tried to combine instrumental progressive music with a singing track and release songs which are normal–you need a verse and chorus, people have learned this–and we tried to combine those two things on albums. This time we wanted to be more … free. There are two parallel roads in Apocalyptica. We have always created instrumental music, and on the side we have also wanted to have songs with singers. They have something similar, but they are two different dimensions.”

Without the directive of lyrics, the listener is given the freedom to wander within the music, as Lötjönen continues, “I wish that our listeners could create something in their minds, pictures in their minds, mindscapes, in our music. It’s absolute instrumental music, so it’s abstract, abstract art. But we are telling some things, we are giving the names of the songs, trying to tell some stories about the music, but the truth is the listener can close their eyes and watch the scenes or the memories the music brings to their mind. That’s the thing, that freedom is created forever. Music for me is like a mental rush. It brings lots of pictures to my mind, scenery, small details, anecdotes, also like memories from my childhood, when I was young what music is listened to, for many of our fans it may bring memories from our Cult album [2000], our third album, twenty years ago.”

The instrumental songs are truly exquisite, bringing together a range of influences to create a sound that reaches far beyond simplistic and misplaced categories of ‘classical’ cello music. “We had freedom to do whatever we want,” he says, “but basically Apocalyptica is rhythmic music, not like symphony music. In our band we have a drummer as well, but also strong bass on cello, there are lot of moments where there are no drums at all, so there are long parts just cello. There are a lot of problematic time codes, and changing time codes all the time, rhythmically like really weird … and we wanted to do this, like progressive, we are fans of that kind of music as well.”

Interwoven with the rhythmic complexities of Cell-O’s nine tracks, are a vast range of melodic elements, created for example by Celtic instruments in Fire & Ice and the graceful wistfulness of the cellos in Rise. “That is Troy [Donockley] from Nightwish,” Lötjönen notes regarding the Celtic vibe on Fire & Ice, “It creates a really magical mood of the ancient times and the modern times combined. We tried to bring the natural cello sound on this album, and then distort it, playing with this huge range. The distorted cello … is more ‘raise your fists, are you ready for the battle!’, but this cello sound [on Rise] is more of a gentle whispering in your ear. There are a lot of different kinds of moods … this album, there are hundreds of different kind of emotions inside, and inside the listener, who will feel it. This is complex music. You should listen to the tracks at least five times to find out what’s inside the music. It is not easy to open.”

Fear not, fans of lyrics, for Lötjönen adds, “If you like Apocalyptica singing tracks, don’t worry, we will release some songs later next year.”

Cell-O will be released 10 January 2020 through Silver Lining Music.