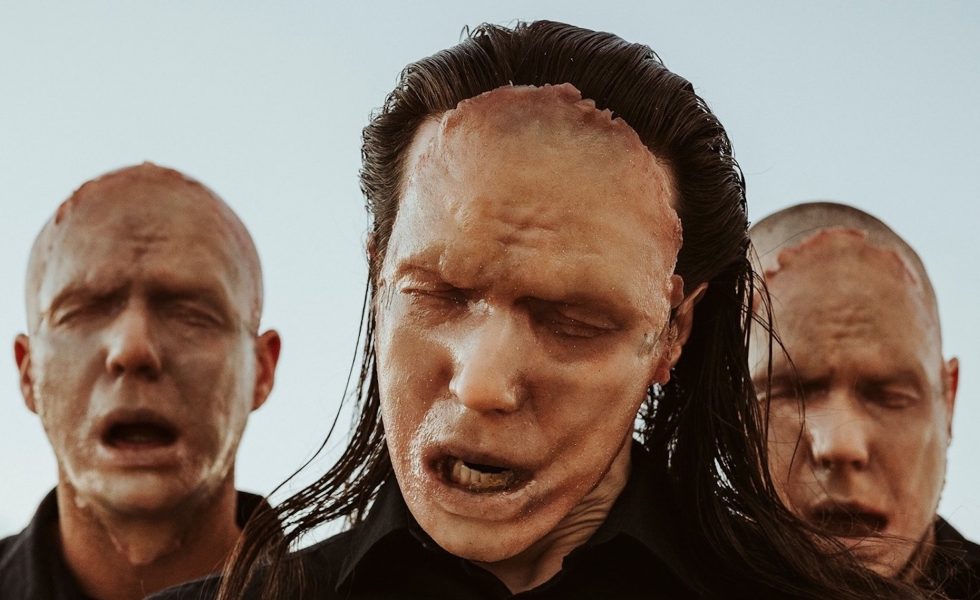 Dwelling in the rancid abyss between expression and insanity, dancing in the abstracted recesses of mind, is the hostile space of The Amenta.

Formed at the turn of the twenty-first century, this twisted Australian five-piece have become notorious across three albums and extensive live touring for their raw and deranged strain of death metal. Now seven years since calling hiatus, The Amenta are back with their fourth album Revelator, and we are in for some dark and unsettling times.

“The thing that really excites us,” The Amenta’s keyboardist Timothy Pope says, “Is the new idea. The one that is a bit scary, a bit exciting. That’s the one that ends up being the one we build songs around. So Revelator came out quite naturally, it wasn’t forcing any big change, it was just a matter finding the things that were really exciting.”

The Amenta are renowned for obliterating expectations, with each new album offering new and challenging elements. Revelator is no exception, as Pope reflects, “One of the big changes in this album, actually, is Cain’s [Cressall’s] vocal performance, which is really varied. One of the moments that really opened up the album for us was in the demo Cain did early on for the song Twined Towers. There was a falsetto line, and we were, like holy shit, we’ve never heard that before, never done anything like that, it was really exciting.”

I never have any filter over what I’m trying to put together. I respond how I feel it needs to come out. That’s all I’ve ever done.
[ Cain Cressall ]

“From my side,” vocalist Cain Cressall says, “it was really just the same as it always has been, where it’s all about reacting honestly to what I’m hearing. I never have any filter over what I’m trying to put together. I respond how I feel it needs to come out. That’s all I’ve ever done. There’s some different vocal sounds from what you have heard on prior albums, but it’s just because I was responding to what I was given, and that’s what felt right for those sections. There was no decision that, oh, ‘on this album we’re going to fuck everyone over’ and throw something in there that no one would expect. But that’s something that seems to happen with each Amenta album, so it’s really no different to anything we’ve done before in that sense. Every new release is almost a backflip from the album before it, so it’s true to the tradition of the band that there are a lot of surprises going on in the new one.”

Revelator is undoubtedly the most violent and deranged album from The Amenta to date, and yet, it has provoked Cressall to clean vocals in response. As he explains, however, sometimes the most dangerous emotions are best expressed through a broader range. “The thing is,” he says, “with growling and screaming, there are limits. It’s actually fairly limited as to the range of emotion that you can bring to the delivery, which isn’t the case with clean stuff, I think using your true voice is something that has a lot more range for emotion that you can bring through that platform. You know, I’m not saying that death metal growling doesn’t have space for emotion, there’s a big difference between a band that’s doing mechanical colour-by-number death metal stuff and someone who’s pouring their guts out. But even pouring your guts out into that kind of vocal style, there is a kind of field that you’re constricted to. With the natural voice the field is unlimited, that natural voice that we use to communicate every day, so there were certain kinds of emotions that I felt coming through the tunes that I felt were completely fitting to use that method of delivery because there’s range in there to effectively compliment what I was hearing. If were for the sake of aesthetics try to conform strictly to distorted vocal styles, death metal growling and screaming … it wouldn’t have the same kind of vastness that the album has ended up with. It is vast, and dense, between what the instruments are doing, the thickly layered webs of soundscaping, and my vocal stuff. I was just true to myself and the songs.”

I also think that we’ve slowly stripped away a lot of the theatrical performance aspect of being in a band. We started this band when we were eighteen years old. But as we keep making more music, we get more and more honest about what it actually is that we are, so stripping away the expectations of ‘this is our genre’, and this is what’s expected of a band.
[ Timothy Pope ]

On what has facilitated this broader emotional range to emerge for The Amenta, Cressall and Pope agree that it’s a hallmark of a more sophisticated and confident band. “To be honest,” Cressall says, “it’s a natural progression, it’s a natural expansion, none of us have ever really taken a break from music. Even if you’re not activity creating, demoing, writing, there’s just this constant musical narrative in the back of our heads, we’re always listening to new things always looking for new ways to put things together, just in the constant expansion, its naturally opened up space for new things to come into what we are doing,” In agreement, Pope adds, “I also think that we’ve slowly stripped away a lot of the theatrical performance aspect of being in a band. We started this band when we were eighteen years old. But as we keep making more music, we get more and more honest about what it actually is that we are, so stripping away the expectations of ‘this is our genre’, and this is what’s expected of a band. We genuinely do make the music for ourselves, it’s a process of cleaning away all the clutter and being as honest as possible with the music. I’ve realised recently that all the lyrics have been about the same thing, like the meaning is circling down to a certain point. It started out broad, metaphorical, and as I get closer and closer to something that means something true …that’s kind of where we’re currently at, right in the centre of it all, and that’s where it’s coming from. So this emotion and range is us getting to the crux of what it actually is.”

And so, what is the crux of this music? “More than anything else,” Pope explains, “the lyrics are working on more of a subconscious level. So in the past, the lyrics would generally be written around a theme. The process for writing lyrics on this one was very, very different. I carried a little black book for years, five years or something, just wrote, as I thought of them, I was writing out puns and phrases, and portmanteau words and things like that just as they occurred to me, that had a reference to what I was thinking about or was obsessed about, but then I deliberately forgot all the meanings, totally forgot what they were all about. Then when it came to assembling the lyrics later, I looked through the book and started finding phrases that seemed to have a meaning when you put them together. So two that might be written years apart, put them together and then a new meaning was made. The aim there is that there are themes the songs are based around in the assembled version, but buried within them is this kind of this collage, this juxtaposition of images, with a whole bunch of meanings that are subconsciously forgotten. The interpretation is more important than the actual meaning. The idea is that all these images are clashing in ways that are hopefully going to trigger something in the listener and for them to start forming their own patterns. There’s so many themes buried within it, and they’re all built around our collective obsessions.”