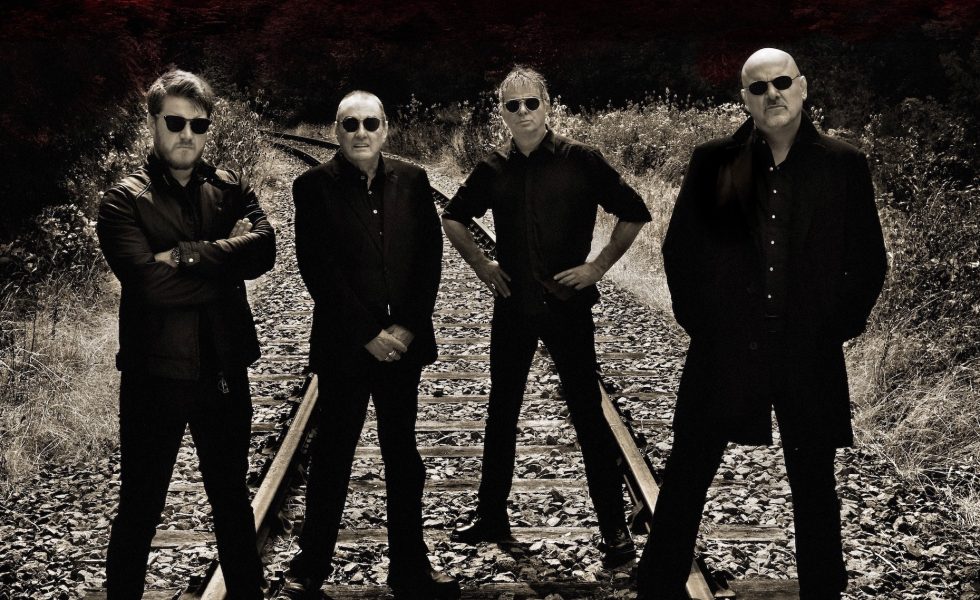 THE STRANGLERS // The Men In Black Strike Back

Enduring English punk rock institution The Stranglers are a band who’ve never been afraid to do things 100% on their own terms.

Rapidly closing in on 50 years in the music caper, they’ve traversed an epically varied career trajectory since emerging as pissed off outsiders at the dawn of UK punk and antagonising the establishment and their musical contemporaries in equal measure with their belligerent and confrontational ethos. They could sneer, offend and three-chord pogo with the best of the ‘class of 77’ while simultaneously embracing so called non punk elements such as keyboards and songs with a greater running time than two minutes.

Never the type of band to pander to expectations, they wrote their own rule book stylistically and artistically and by the mid-80s were riding the heights of commercial success via radio hits such as Golden Brown and Always the Sun. Surviving the loss of original vocalist Hugh Cornwell, they have managed to remain musically relevant whilst at the same time garnering a whole new generation of disciples.

The band have been no strangers to our shores over the past decade, having toured here to their swelling throng of devotees at least three times over the past decade. On the line with legendary bassist Jean Jacques (JJ) Burnel, a man whose thuggishly melodic bass sound has remained a key cornerstone of the band’s ethos as well as influencing a whole host of musicians across decades and genres, we cover off a range of topics, including why the band is still a relevant live entity, getting run out of town in Brisbane in 1979 and the not so subtle art of (ahem) fruit and vegetable insertions as a way of dealing with pesky gobbers back in the primitive dawning of punk rock.

I think Joh Bjelke-Petersen sent some of his thugs along to try and smash the gig up. It ended up in total chaos, and we scarpered all over the place and then we had to rush over the state line (into NSW via Tweed Heads) to avoid Joh’s thugs from having a go at us. It was all very exciting looking back!
[ JJ Burnel ]

I run it by JJ that Australia has very much embraced The Stranglers across the past decade as revered elder statesmen of punk, as opposed to the uproar they caused amongst uptight conservatives upon their first visit to these shores all the way back in 1979.

“It seems that you’ve adopted us over there, finally. Because the first time we came to Australia it was very controversial. There were all kinds of hijinks, it was great fun, mind you. During that tour, our reputation preceded us, we were banned from quite a few countries at the time. It was just people over-reacting, really. Especially in the media at the time. “

As for Burnel’s memories of their infamous Brisbane show on that particular tour; “There was all kinds of stuff going on at that particular event. I think Joh Bjelke-Petersen sent some of his thugs along to try and smash the gig up. It ended up in total chaos, and we scarpered all over the place and then we had to rush over the state line (into NSW via Tweed Heads) to avoid Joh’s thugs from having a go at us. It was all very exciting looking back!”

Clearly the experience left an indelible impression, with the band penning a biting expose of Joh’s regime in the form of their classic track Nuclear Device (The Wizard Of Oz), a track which will no doubt be getting an airing at their Brisbane performance on 9th February.

Back in those heady days, an anti-social form of behaviour amongst a small group of punk gig goers related to the icky art of gobbing, where they would show their so-called ‘appreciation’ for bands by launching spit at them. I put it to JJ that such behaviour in 2020 would result in a social media uproar and asked him how they reacted to it back then.

“For a short period of time it became some sort of statement. It’s not very pleasant when you’re singing and you get someone else’s gob in your mouth. A couple of people I know got hepatitis as a result of it. Very early on when that started to happen to us, we decided to put a stop to it—we used the banana insertion technique. We did this one night in the UK. We saw the perpetrator and we ourselves went into the audience, pulled the perpetrator up on stage, took his trousers down and stuck a banana up his arse! They got wind of that on BBC Radio and the next morning, on the biggest radio show in the country, it was mentioned. And funnily enough at the following nights gig, people were queuing up to have bananas stuck up their arses! It was a novel way to demonstrate the British sense of … I don’t know what you’d call it haha! One additional anecdote to that story is that the same things happened to us in New York a few months later. We didn’t have any bananas on hand … but we did have a celery stick.” I put it laughingly to JJ that the perpetrator was lucky that the band didn’t have a butternut pumpkin on hand, to which he chuckles: “Now you’re starting to fantasise.” Yes they don’t make gigs like this anymore, which is probably just as well.

From here talk moves to the topic of new numbers and whether we can expect to hear any of them on the upcoming tour; ”We’re right in the middle of recording a new album.  We’re currently working on six pieces and we’ll probably try one or two of these new ones in Australia and New Zealand. It helps us to identify the songs better. The more you play them beforehand, the more you know how you’re gonna play them when you record them. By playing these tracks live, you create a synthesis of all the different ideas you may have.”

JJ also shares his thoughts on keeping things relatively simple in the studio as a way of letting the music breathe and facilitating its development in the live setting; “The problem with modern studios is that you’ve got infinite numbers of possibilities to put on a track. Nowadays with computers, you don’t have eight, sixteen or twenty four tracks, you have hundreds. And that slows the whole process down because you’ve got lots of different choices to make. And the more possibilities you have, the less space you create in the music. It’s the space that helps fire the imagination. We don’t want something completely saturated with an infinite number of tracks. When you go to a restaurant with a huge menu, you know that most of it’s not going to be fresh. I feel the same things applies to the recording process.”

We’re lucky that we get on well with each other. Having been in each others’ pockets for many years, sometimes we irritate each other, but in those instances you sense it, and take a step back for a bit.
[ JJ Burnel ]

I ask JJ what the process for the band is when it comes to creating new music together after all these decades; “It’s like its always been, for the most part. We spend a lot of time together with each other, outside of the band, socially. Then we get together, work on ideas. I always have a lot of ideas, which I share with the others to see what their input is, and things develop.

And there’s always so much subject matter to write about, so that’s really not a problem. The challenge is trying not to repeat ourselves and experimenting with the limited talents that we have, which is an exciting process as far as I’m concerned. I’m a fan of a lot of different kinds of music. Sometimes you want to try out a different direction. Sometimes it works, sometimes it doesn’t. I find it stifling to stick to one successful formula. For a lot of bands, once they’ve hit upon a successful formula, they look to repeat the formula, or the record company want them to repeat the formula. I however find it creatively suffocating when you just repeat a formula.”

While on the subject of formulas, I ask JJ if there’s any magical formula to the bands enduring survival and why he thinks the band continue to remain relevant and draw in new disciples after 46 years in the biz:

“We’re lucky that we get on well with each other. Having been in each others’ pockets for many years, sometimes we irritate each other, but in those instances you sense it, and take a step back for a bit. We bounce off each other and no one steps on each others toes in this band. We’ve all got our different functions. We haven’t got four different people trying to offer their finished pieces up. That can be the death of a band. I’ve seen it so many times, you get one person who wants to write all the stuff and get all the royalties and suddenly the dynamic between friends changes and people fall out, just because of money, after starting out as mates. But we’ve avoided that since day one. Everything is shared equally, both successes and failures.”

At the moment we’re in a very ‘up’ period. The last three albums have been really well received. I don’t think we’ve ever had such a big audience. And we’re sounding fucking great live! I’m amazed by some of our peer groups who say “why do you guys rehearse so much?” Well I don’t want to be a prisoner of my instrument. I play the same songs, but slightly differently, every night. Because I can. And I try to avoid looking at my instrument so I can just feel it. I may play the odd bum note, but I can play most of our music without looking at my instrument, because I know it so well. It gives me freedom. I’m not stuck to the same old format.”

So take it from JJ himself, The Stranglers are clearly still a band in fine fettle creatively and in the live realm, so for anyone with even the remotest interest in first generation English punk rock with an eclectic twist, be sure to (Get A) Grip (On Yourself) and get along to one of their upcoming shows at the following venues: