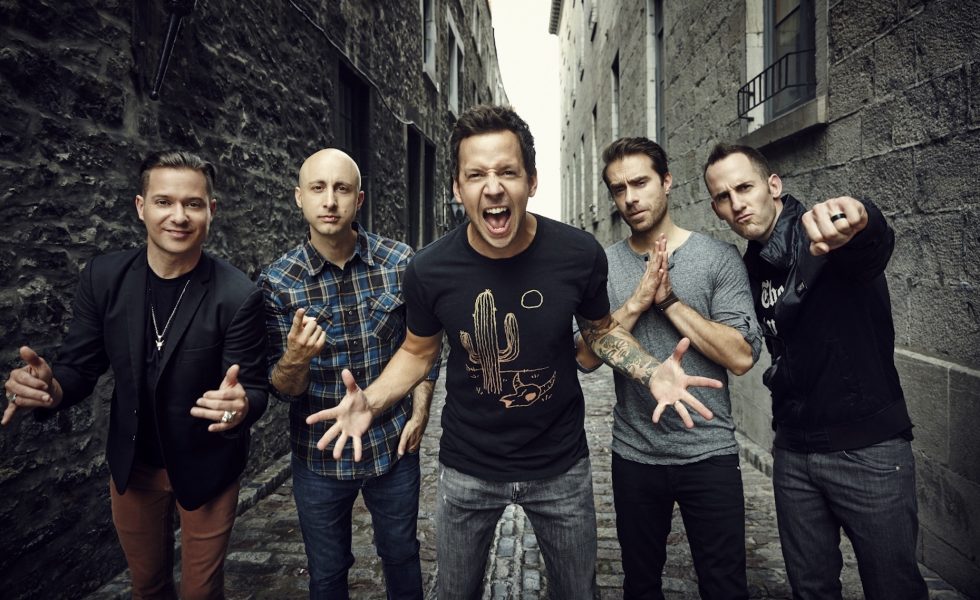 After a solid two years of touring, 2016 in support of album Taking One For The Team and last year an anniversary tour marking 15 years since the release of their debut album No Pads, No Helmets…Just Balls, Simple Plan are enjoying some much needed downtime–only the way vocalist Pierre Bouvier describes it, it doesn’t sound like Simple Plan are winding down at all.

MORE: Story Of The Year Are Returning To Australia In May // DZ Deathrays – Pig City’s Big Time Party People

“We’ve got a couple of months off actually right now, which is very nice,” says Bouvier, “We’re going to get some much-needed family time, a little bit of rest, start writing slowly. Then we’re coming to you guys at the end of April, so there’s that to look forward to.”

Spending your time off with family is one thing, but writing during that period? That doesn’t sound like taking a rest at all. “We’re not in full blown writing mode yet,” says Bouvier, “But I think everybody’s thinking about it, obviously, because we haven’t had an album in about two years. We’re very slow. Honestly, we’re very slow, but it’s because we do take our time writing songs, and we want every album to be amazing.

“I think everybody kind of wants the next one to come out quicker, but we still need to get some rest and sort of get our ideas straight before we get going.”

For Simple Plan, gaps between album releases and extensive rates of touring is all to do with how the band do things in stages–there’s the ideas stage, the frustrated-at-the-process stage, the take-our-time stage. This stage, Bouvier explains, is what’s known as the fun stage. “Right now, it’s the phase where kind of anything goes. You can sort of try out a bunch of stuff, you know? Put out songs. Honestly, in the very beginning, everything’s kind of okay. Once in a while, it’s like, ‘Well this one’s good,’ you know? We’re not there. It’s still very early.

“I think it sort of gets, not frustrating, but stressful, more towards the end, where it’s like, ‘Do we have an album? Is this good enough? Can we go to the studio now?’ Then you kind of look at the calendar, you’re like, ‘Oh shit, it would be fun if it was out in three to four months. Can we make it?’ That’s when it gets kind of stressful.”

Simple Plan could go, shall we say, the Beyoncé way, and drop a new album in a matter of months. They could, but they won’t. They take careful pride and care in their craft, juggling other areas that come with being in a long-standing band, like staying in touch with their fans. Such is Simple Plan’s dedication to the social media platforms, there’s no way they could keep a new album under wraps in the same way. “Here’s the thing we don’t know about Beyoncé,” Bouvier begins, “Here’s the thing about those albums, here’s the thing about it is that because we are so present on social that to pretend we’re not even thinking about an album for the next six months, I don’t think we can pull that off, you know? That’s how she surprised people, you know? She just had a picture of her at some fashion event, a picture of her there, but meanwhile, she spent days in the studio, writing and recording stuff, and she never tells anybody. That’s something she can do. I don’t know how she does it.

“We’re always on our social. We always get together. Whenever it’s time to record or do stuff, that if we actually go social media silent for a few months because we’re making an album, people are going to start to worry.”

If Simple Plan up and disappeared, yes, fans would worry. Especially after they’ve had such an epic run on their 15th anniversary tour for No Pads, No Helmets…Just Balls. “We’ve had an amazing year, beautiful moments, great shows, definitely a lot of fun,” says Bouvier. “I don’t know what it is about just playing that whole album, but it feels good. We’re having a good time. The fans are having a great time. People are coming back to multiple shows. It really takes us back, you know?

“I think it takes everybody back, really. A lot of our fans are now 30 or 27 or whatever. Maybe back then, they were 8, or 10, or 12, and they couldn’t come to the No Pads shows back then. By the time they got to see us, it was 2010, 2011, like, ‘Man, I wish I could’ve seen all these old songs as well.’ Now they’re coming back, and honestly, everybody is stoked. It’s been so much fun, and I’ve been very happy we could work it out so that we could come to Australia with the show. There was something special about that album for the fans and for us.”