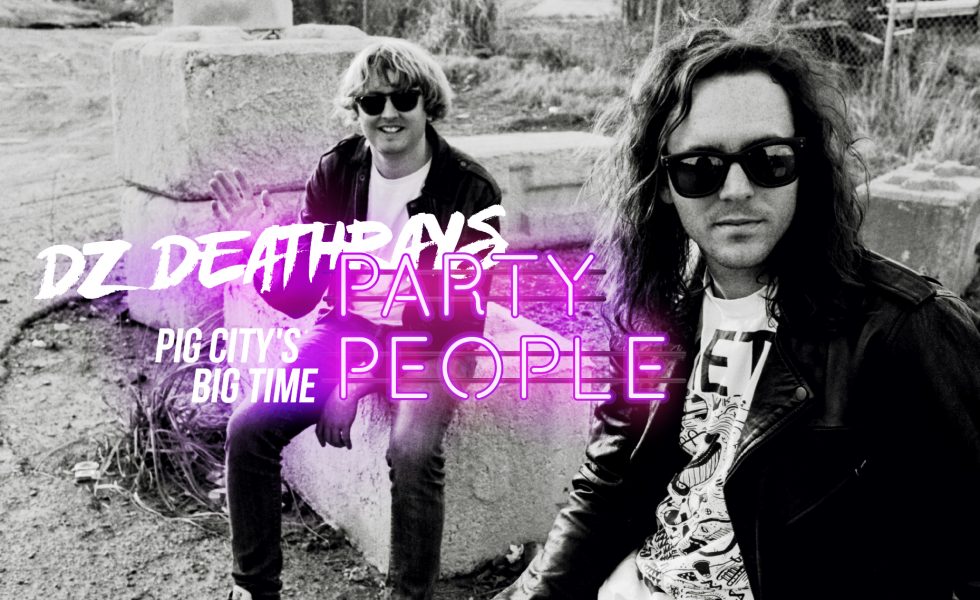 Australia’s own power duo DZ Deathrays are a household name. With a comfortable two for two hit ratio between albums released and ARIA awards won, who would have figured “party thrash” would not only go down a treat with the masses, but with coke-nosed industry types as well?

Today, the third instalment in the DZ saga drops: Bloody Lovely. By all accounts, it’s an album that lives up to its moniker. Talking to drummer (the “D” in DZ? Well, that’s who he is in the videos) Simon Ridley, he didn’t even think they’d make this far. Really?

“I mean, we never expected to get three albums deep. But, the irony of releasing it is pretty fucking wild,” Simon, er … says. “And, yeah, it’s just fun getting the machine back up and firing and putting stuff out again. It’s been awhile.”

It really has; acclaimed long player Black Rat appeared in Spotify playlists around May of 2014. Four years, especially in this trash it, change it, mail, upgrade it music culture is a damned near eternity. We can only speculate, but the constant barrage of “when are you making new stuff?” likely drove them batty. In fact when Hysteria interviewed them during a press junket a few years ago, the question elicited a big ol’ groan.

“We kind of remove ourselves from that. I guess it’s more just internal pressure. Like, Shane and I just getting sick of not putting anything out for awhile, you know. That sort of thing that really drives us.”

As is the fashion these days, bands want to tease us so much that we have a pair of new pants on standby. We’ve tasted Shred for Summer, ripped through Bad Influence, and sweated Total Meltdown, three tasty slivers of an eleven-piece pie. How does one approach album number three, with so many eyes (and ears) focused on their every move?

“Well, I think with Black Rat we just wanted to sort of knock away expectations, so we put on similar songs. A more relaxed approach. With this one we just wanted a cool, rough album that will just be really fun to play live. And it’s sort of the gist of it, I guess. These songs are a lot more consistent over time. It’s the same drum kit sound pretty much the entire album.I wanted it to sound more like a live record…I guess even though it wasn’t experimental. It was for us. It was kind of just a refined party rock album.”

I always just try to make the best thing that we can make. You know, for us. It’s very selfish sort of creative process. So, as long as we’re happy with the album, then I don’t really care what happens to it, you know? I would be more upset if we put out something that we didn’t enjoy.
[SIMON]

“I think we all just wanted to do something a little different. You know, you don’t really get the opportunity to go into studios all that often. So, when you do, why repeat the exact same thing?”

Fair point. With all those pent-up tunes clocking around their heads, do they still feel a twinge of excitement as they stand back like so many of us showing mates YouTube videos they don’t quite get? What’s the track that’ll give the boys a buzz if we froth it?

“Maybe one for me is probably Afterglow,” Simon says. “‘Cause that was one of the tracks that we first wrote that was probably one of the hardest ones for us to get down. We rewrote Total Meltdown a few times. And Afterglow is probably the second most rewritten song and we just threw in as much technical little bits as possible. So, there are so many little moments on that track. I wonder if it kind of comes up that way, you know? But, I don’t know, that’s the funny thing about putting music out. It comes back to you in different ways.”

For DZ, the dividends have crossed their palms in silver—silver pyramids, that is. 2012’s Bloodstreams won them their first ARIA, with Black Rat netting them their second. (One day Amity, one day.) A pressure to go three for three must be overwhelming.

“I guess I’m just pretty chill and I always just try to make the best thing that we can make. You know, for us. It’s very selfish sort of creative process. So, as long as we’re happy with the album, then I don’t really care what happens to it, you know? I would be more upset if we put out something that we didn’t enjoy.

DZ had the distinct honour of opening for Foo Fighters in Brisbane last week, as part of their Concrete & Gold tour. Though the audience might be a few fathoms removed from the depths of the underground, it could have showcased some of their newer material. But as it turns out, they’ve been schtum on busting out bits of Bloody Lovely.

“We don’t play very much of it,” says Simon. “Because I don’t want to be that band that plays all that new shit that nobody knows. You know, that sucks. I hate going to a gig. So, these last couple of shows in 2017 introduced Total Meltdown and Bad Influence, which was really fun. But, yeah, we haven’t been able to play anything live. So, we’re just wrapping up all the old songs that we’ve been dragging around the world for the last, like, couple years. And then, I think once the album’s out, then we’ll be able to start playing all these new songs live, which will be fun.”

Does that mean holding off until punters have marinated themselves in the new ish?

“No, I think we’ll definitely pull out some more of the new stuff, which will be great and see how it works live. Cause that’s the fun of it, just finding out if the song bombs live or not.”

all the parts where you’re in the studio when you’re thinking, oh, like when this part drops and then if you play it live sometimes it just might not, you know? At the moment, because we’re kind of wrapping up with The Mess Up, that song, we thought that thing was fucking used. But when you play it live, it’s just interesting seeing dudes doing like circle pits to it and it’s supposed to be, like, a real chill song. So, that’s really funny to watch that sort of stuff.”

Like all things rock ‘n’ roll, it’s a process of trial and error.

Bloody Lovely! is out now via IOHYOU.

You can catch DZ Deathrays on their Bloody Lovely tour this May. Tickets go on sale 9am, Monday 5th of February.