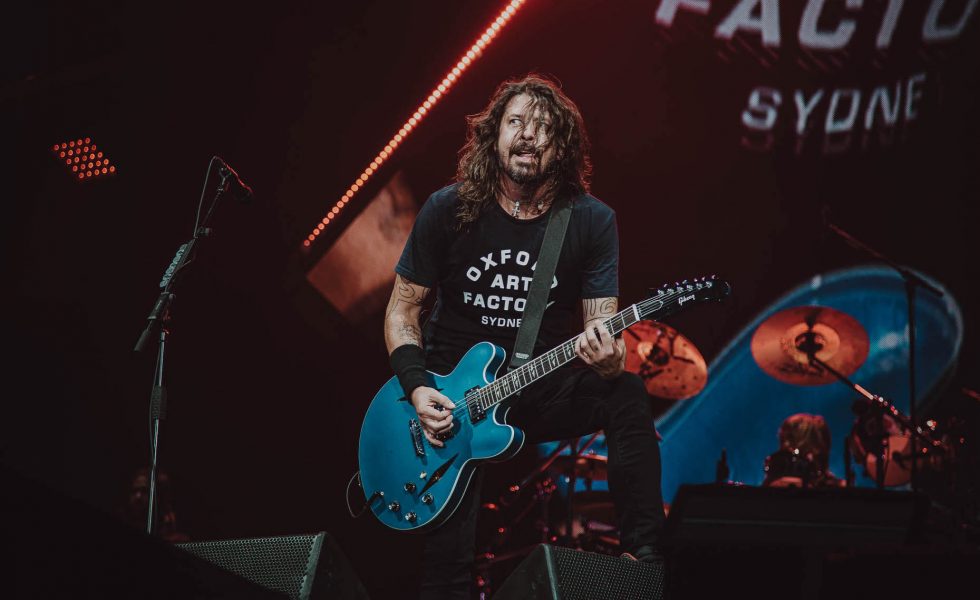 FOO FIGHTERS with Weezer + The Preatures

There’s something distinctly un-rock’n’roll about a show starting before dinnertime. It’s 5:30pm when local gems The Preatures hit the stage, and a sizeable ANZ Stadium is teeming with sweat, beer and sunburnt dads. Hysterians, hold on: we’re in for a big one!

Even with the ruthless heat belting down on them, The Preatures bring a solid crowd of early birds to its feet. The quartet wield tight and temperate flares of glam-slicked indie rock, revelling in every soaring riff and crackling drum fill as punters flood through the gates in droves. Frontwoman Izzi Manfredi owns the spotlight with her silvery and dominant vocal talents, guitarist Jack Moffitt shredding to his heart’s content behind her. It’s a laudable fit, the scope of their platform with the grandeur of their form–specifically when it comes to cuts from last year’s criminally underrated Girlhood–but a daytime setting, echoey mix and lack of theatre-set intimacy means a lot of their opulence is regrettably lost. The band do a more-than-worthy job of adapting their groovy tunes to the big stage, but here just isn’t where they shine. If you’re ever afforded the opportunity to catch The Preatures in a venue like the Enmore, don’t think twice.

Weezer, on the other hand, can shine damn near anywhere. Surf Wax America rings out through the stadium and Sydney loses its complete and utter shit, fists pumping with every sticky-sweet power chord. Rivers Cuomo is known to be dead stiff in his performing, but tonight the frontman is smiling, interacting with fans and darting around the stage like a restless dog in an open field. His vocals are sharp and cut with a characteristically bubbly edge, gleaming most on tracks where the LA crew dive into slow jam territory (Say It Ain’t So and El Scorcho, notably). It’s not just Cuomo who commands the mic, either–Brian Bell employs a fierce set of pipes when he’s not busting out rhythmic hooks, and touring keyboardist Karl Koch has unmistakably mastered the art of the backing vocal.

Repping the local scene in an Oxford Art Factory tee, Grohl is an ebullient ball of animation. He tears his throat to shreds with pseudo-gutturals that rival those of metal greats, pushing himself so hard that he’s drenched in sweat by song #2 and red in the face by #3.

At a full hour long, we can forgive Weezer for making their first Sydney jaunt in five years an opening set. To exactly zero complaints, a bulk of their setlist is allocated to the Blue Album, hits like Buddy Holly and My Name Is Jonas roaring alongside the aforementioned two classics. We could certainly do without the nomadic Pork And Beans or anything from 2017 trainwreck Pacific Daydream, but look–it’s not every day we Australians get to see Weezer in the flesh; if Cuomo and co. wanted to play an uninterrupted four hours of the Old El Paso theme, we’d chomp at the fucking bit. As if they’d timed it to the second, sunset rolls around just as the band close on summer staple Island In The Sun. Perhaps it isn’t the most \m/ of moments, but we can’t help but lap up the good vibes.

Speaking of vibes, hell hath no fury like Triple M dads: there’s at least 50,000 people crammed into the footy ring, and the vast majority are middle-aged tradies all tinned up and school-kid giddy for their annual Live Music Concert Gig™. Chaos ensues as Dave Grohl sprints out to a blistering guitar lick, the other Foo Fighters not far removed when he leaps into the deceptive noodling of Run. Energy onstage is acute and unremitting from the recent single’s early payoff to the last ripping solo of The Pretender, three tracks later. And while that doesn’t sound like much of a stretch, it’s worth noting that we’re 40 minutes deep by the time Grohl echoes his last, “What if I say that I will never surrender!?” We shit you not, they stretch that one goddamn song out to a taxing 15 minutes. 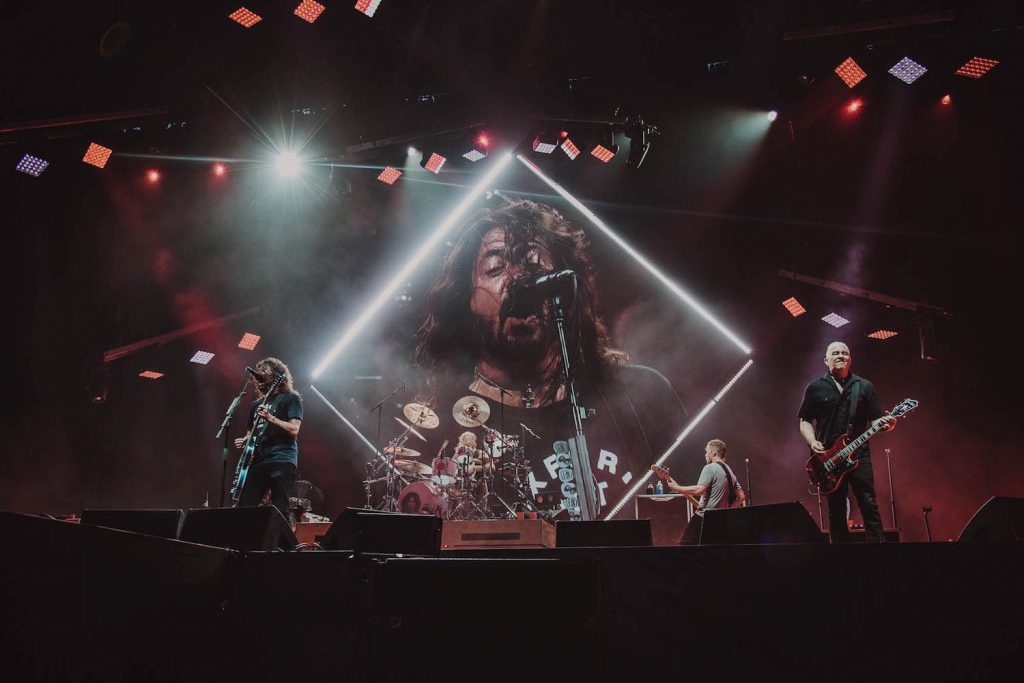 24 years in the game, though, the sextet get a pass for wearisome jam sessions: there’s never a hiccup in the playing, and not once do they lose the crowd’s attention–even when they slip into numbers from their latest outing, Concrete And Gold. Still too fresh for the nostalgic edge and somewhat brushed off upon release, the new jams obviously don’t garner the rapturous praise that fan-faves like All My Life or Monkey Wrench do, but they unquestionably have a place amongst them. When a three-piece choir joins the band for deep cuts The Sky Is A Neighbourhood and Dirty Water, it’s clear the Fooeys have room yet to surprise us. 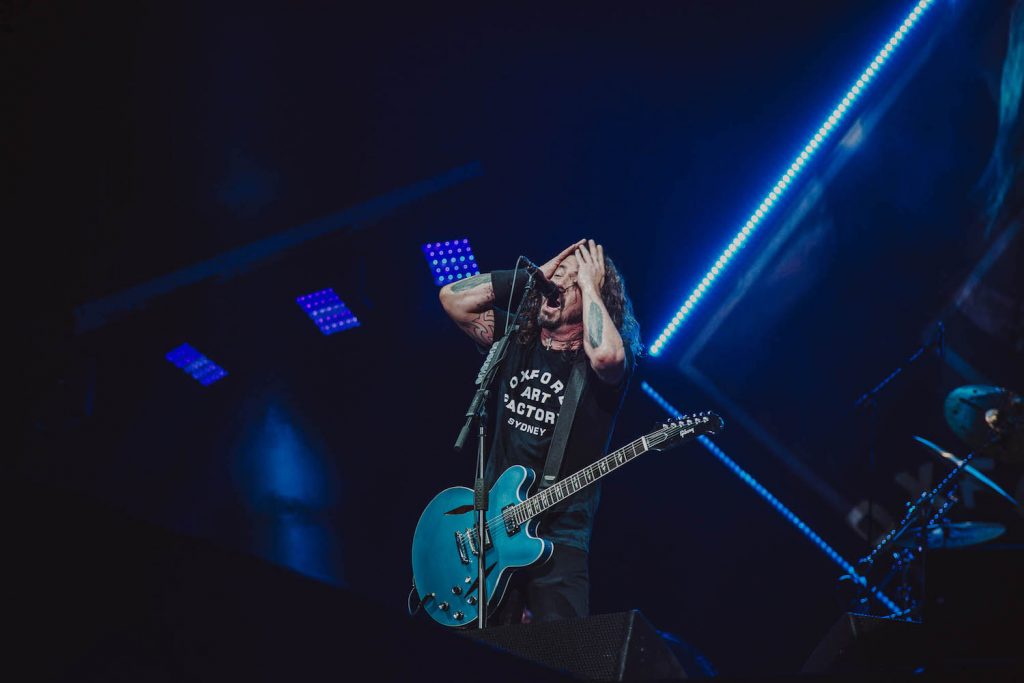 The rest of the setlist is a veritable greatest hits affair, with triply extended runs of My Hero, Rope and Best Of You highlighting the stretch before a volatile capstone of Everlong sends the night out on the most explosive of bangs. Grohl’s soft spot for Sydney pays off with a few exclusive treats: a one-off playthrough of wistful treasure Big Me (played solo and softened to a dazzling crawl) and a viciously impassioned cover of AC/DC‘s Let There Be Rock. Grohl takes the backseat for the other two covers on show, with shredlord Chris Shiflett handling a punky jab at Alice Cooper’s Under My Wheels, and drummer Taylor Hawkins busting out the big guns in a beautifully exorbitant tribute to Queen‘s Under Pressure (complete with Grohl behind the drums). 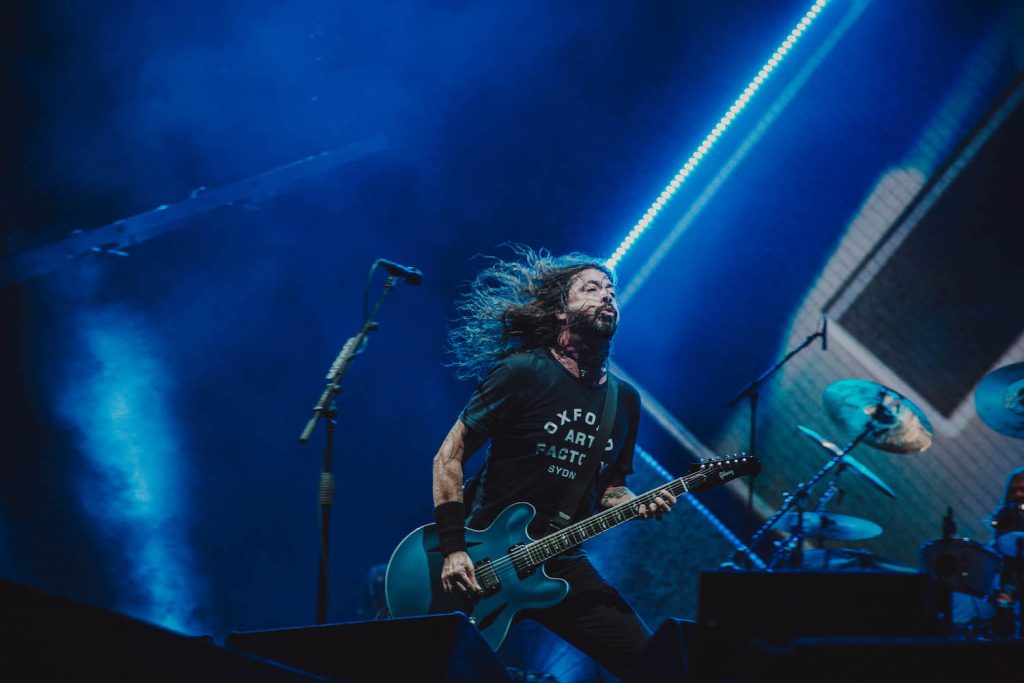 It goes without saying that the Fighters of the Foo are a well-oiled machine with instruments in hand. Repping the local scene in an Oxford Art Factory tee, Grohl is an ebullient ball of animation. He tears his throat to shreds with pseudo-gutturals that rival those of metal greats, pushing himself so hard that he’s drenched in sweat by song #2 and red in the face by #3. Still, there’s no deceleration–every line is sung with as much might as he musters on record, and every crisp note buzzes from his Gibson DG-335 with inimitable resplendency. As far as the guitars go, Shiflett is the real MVP: Goldtop in full swing, he’s to blame for every one of the scuzziest and most classic Fooey-esque tones we dig into. Hawkins’ excessively massive kit is beaten to the brink of death, too, with every last inch of skin being mercilessly solo’d on for our pleasure. Even keyboardist Rami Jaffee gets a moment to shine with his Daft Punk-ish solo. 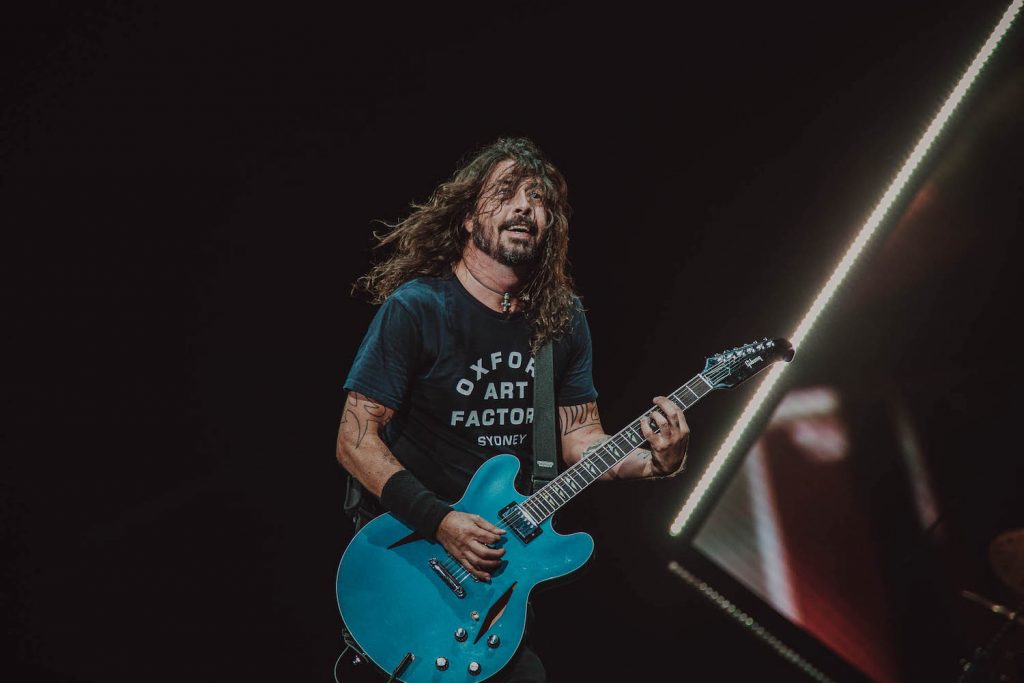 Of course, even bands as quintessential as the Foo Fighters have areas to improve. We start to loathe the drawling outros and overindulgent pentatonic solos once they’ve taken up an hour of the set. There are 24 songs on the playlist tonight, but with three hours to their name, they could easily drag it to 40 without hitting any dull cuts. Grohl’s speeches are all very egotistic and self-serving, and the full-band acting feels a little Spinal Tap at times. But in saying that, no-one goes to a Fooeys show for the quick, punky tension of old anymore. Splendour is a hallmark of their modern set, and with plenty of showy moments to wow new fans and veterans alike, they hit that mark without a scratch. We’re still holding out hope for some future underground gigs like their 2011 Manning Bar set–maybe a Nothing Left To Lose anniversary show at Dave’s new favourite Oxford Street dive?