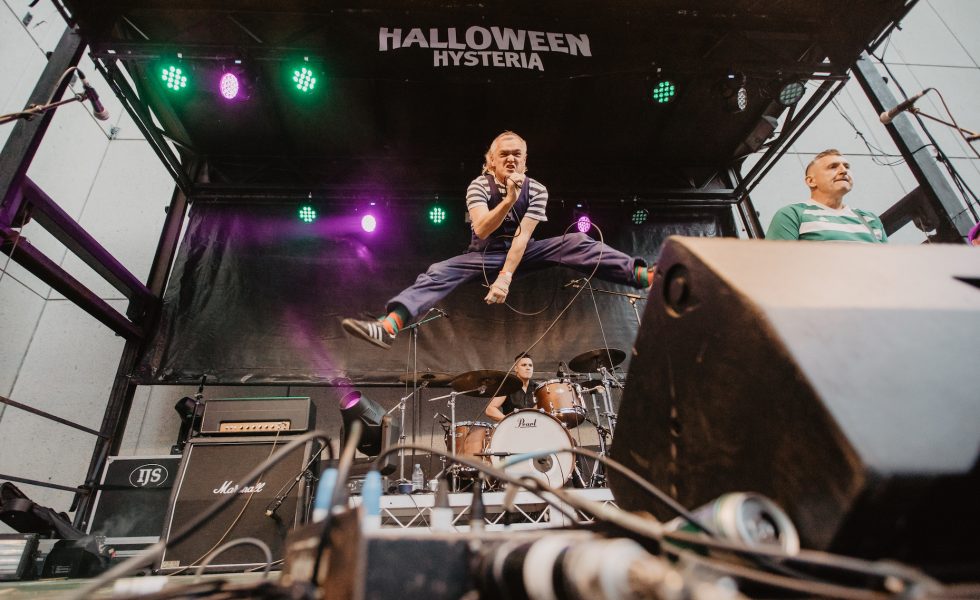 After blowing minds and eardrums with their sonic blitzkrieg at Halloween Hysteria last year, Japanese garage-punk legends Jet Boys have kept true to their word and are back in Oz again in February for a whirlwind follow-up tour. And in another exciting announcement, local ‘bovver rock’ practitioners Shandy will also be on the bill for the Jet Boys Brisbane performance, together with BrisVegas indie-punk faves, Flangipanis.

Shandy have been plying their craft since late 2013, with members of their line-up also moonlighting in a bunch of top-notch punk acts (both past and present) of the calibre of The Disables, Mouthguard, Those Rat Bastards, Psychotic Lemmings, Mystery Of Sixes, The Dinky Flyers and Big Lummox.

Keep an eye out for our upcoming chat with Jodie Flangipani, but in the meantime, we managed to chew the fat with Shandy frontman, Brisbane music stalwart and all-round top bloke, JJ Speedball, who’s been keeping it real on the punk rock scene under his own name and in acts such as Scrumfeeder and of course Shandy, for over 30 years now. 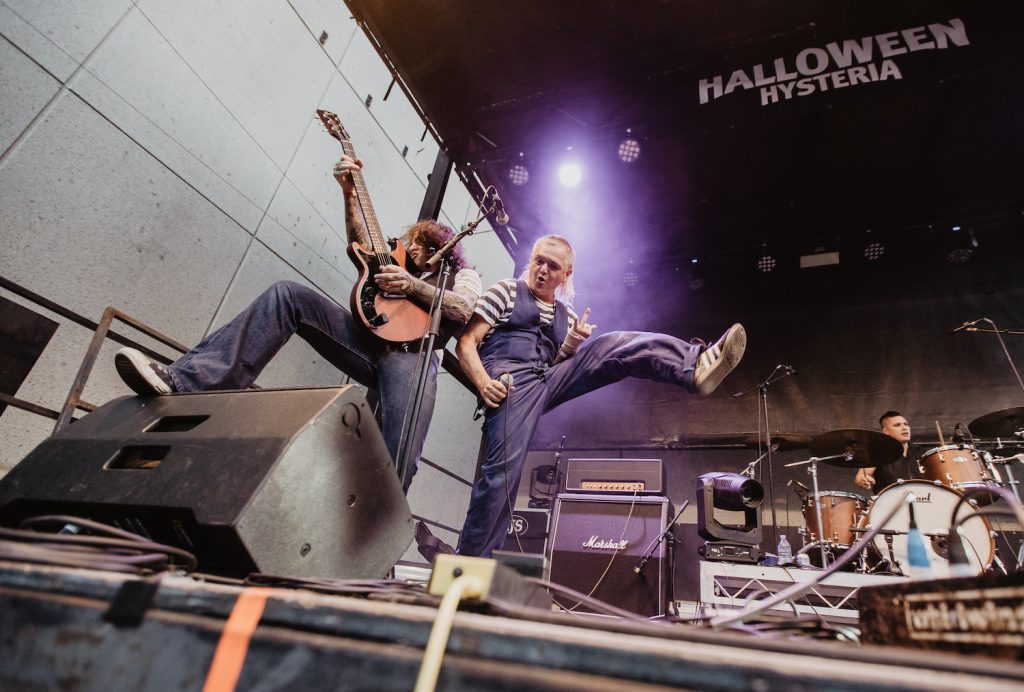 JJ was kind enough to give us the rundown on what we can expect from the Jet Boys upcoming sonic mayhem, the origins of the bovver rock sound, anecdotes from 30 years in the belly of the punk rock scene and why a ‘shandy’ is in fact a beverage that is nothing to scoff at.

Hysteria: You’ll shortly be playing a show with Japanese punk rock miscreants the Jet Boys. Have you had anything to do with them before?

JJ: I have been a fan of the Jet Boys since the early 1990’s. I first heard their song Get Out My Girl on the 4ZZZ  Punk Show when Richard Stanley (of The Onyas and Ooga Boogas fame) and Heather Anderson sat at the control desk. I fell in love with that song—the sound and style really resonated through the radio speakers. Fast forward to 2011 and the Jet Boys are touring Australia—I honestly couldn’t believe it! Walking into the venue and looking around I thought to myself  “Do these people know what they are going to witness?” Before the show I handed over some of my original Jet Boys vinyl to get signed. The band couldn’t believe it. Someone in Australia was holding the old testament! Needless to say the show was fantastic. The next night I saw them again on the Gold Coast. They told me it was their biggest encore applause they’d ever received, it just kept on going. I got to play Johnny B Goode with them on stage—it was magic. Last year (2019), Shandy played with the Jet Boys at Halloween Hysteria 2019 and I housed them while they were in Brisbane. Very fun times.

Before the show I handed over some of my original Jet Boys vinyl to get signed. The band couldn’t believe it. Someone in Australia was holding the old testament! Needless to say the show was fantastic.
[ JJ Speedball ]

HM: How do you plan on competing with their sonic blitzkrieg?

JJ: I never compete with bands. I simply go on stage and play balls to the wall every time. Have been doing it for 30 years. It works for me. Stick to what you know and rock hard.

HM: The Japanese punk/garage scene is renowned for its un-ironic and over the top approximations of the classic sounds of bands such as The Ramones. Are you a fan of the Japanese scene and its leading exponent, and do you have a theory on why Japanese punk bands tend to be so authentic and/or unhinged in their sonic approach?

JJ: I like good bands. I like the Japanese bands that I like. Ones that I listen to include Cobra, Toyko Yankees, Star Club and Jet Boys. I have seen Boredoms, Bentroot, Guitar Wolf, Shonen Knife and have worked with the legendary 5678’s. 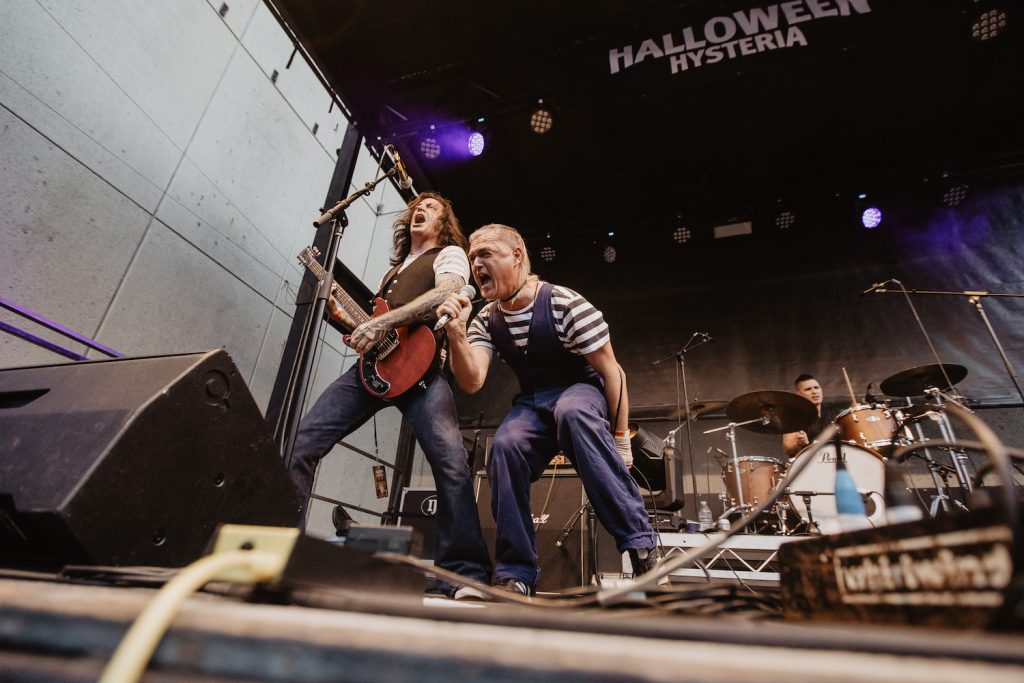 I believe culture can transpire through music. Your environment, thoughts, beliefs and vision all come through in the sound. From my experience of touring this is very evident. The Japanese appear to have a rebellious, vivacious, steadfast style to their punk rock. Touring Japan is a culturally different experience than touring Europe, the United States or Australia. Lots of introductions, manners and respect.

HM: You’ve described the sound of Shandy as channelling the niche sub-genres of junk shop glam and bovver rock. Can you fill us in on the origins of this sound and some of its leading exponents?

JJ: Shandy’s sound is influenced by a few particular music scenes. We are fans of the bovver rock and Sharpie sounds. Bovver rock is a niche sound which splinters off into what’s known as junk shop glam or terrace glam. I loved the bands doing this style–rock and roll with balls and swagger, glam but tough. The bands were predominately from the United Kingdom, including Jook, Heavy Metal Kids, Hammersmith Gorillas, Crushed Butler, Chicory Tip, Bilbo Baggins, Mungo Jerry and Mud, to name a few.

Around the same time Australia had something a bit different going on, the Sharpie sound. Bands like Buster Brown, who morphed into Rose Tattoo, as well as bands like the Skyhooks, were relished by young tearaway rockers sporting hair styles short on top and long at the back. The Sharpies were known for their unique cardigan “conny” and their cuban heeled shoes. One band in particular that were embraced by the Sharpie gangs were The Coloured Balls. Lobby Loyde and his merry men (whether they liked it or not) were the Sharpies number one band. With violence often occurring at the shows, this in turn undoubtedly affected the professional career of the band.

I still have my own teeth, hair on my head, hearing and eyesight. That is success.
[ JJ Speedball ]

In 2014, the year after we started Shandy, the worlds aligned. Giuda (Italy) Hard Wax (U.K.) Suede Razors (U.S.A) and Faz Waltz (Italy) were also making an impact with this sound and style. Australian ABC Television did a short piece on the Sharpies, Shandy received ‘Indie clip of the week’ on Rage (Music TV) and The Guardian newspaper did a full feature on the bovver revival, featuring Shandy.

Shandy ended up getting signed to Contra Records (Germany) and doing three successful European tours in 2014, 2015 and 2017.

Bit of trivia—Chopper Reid and Magda Szubanski were Sharpies at one time!

HM: You’ve been involved with the local punk/underground scene for a long time now. How has it evolved across that time, and how would you compare the state of punk rock in 2020 to when you first started out?

JJ: I always love this question. Change is always a constant. I played my first show in 1989. That’s 30 years ago. I still have my own teeth, hair on my head, hearing and eyesight. That is success. But seriously, I will endeavour to answer this question through a brief summary of my own experiences.

My first taste of Brisbane punk rock in 1989 was hard, fast and hard. Messed up kids looking for a place to go. Violence, overdoses, I would get my name taken by the police every week that I went out of my house.
[ JJ Speedball ]

My first taste of Brisbane punk rock in 1989 was hard, fast and hard. Messed up kids looking for a place to go. Violence, overdoses, I would get my name taken by the police every week that I went out of my house. It was a huge effort to organise a show or to put out a demo tape. It was all snail-mail and landline phones. Punk rock wasn’t cool. I went overseas and on my return in 1995, I find something has changed. Punk rock is popular. I form a band, we win a competition, we release an album, we tour and the fans go crazy. Since then until now the sub-genres come and go as well as the local contenders … some may say a potential popularity contest, an underground network of cosplay kids mucking around before they go back to their families and get a real job. Either way, it will evolve, fluctuate, flourish, die and repeat. For me, Rollo was a huge part of and reason for the longevity of the local punk rock scene in Brisbane.

HM: Can you recall your initial exposure to the local punk rock scene?

JJ: My first encounter in the punk rock scene in Brisbane was signing my name stating that I was eighteen (I was sixteen) to enter the Easts Leagues Club. I walked in to witness the sonic and visual brutality of the Insane Hombres. My virgin sensory experience was blown. Now picture this scene–the Hard-Ons start playing, a large group of skinheads (not very friendly) booted up and dressed to kill were rucking on the left hand side, a large group of long haired skater punks were moshing on the right hand side, and I was literally getting thrown from side to side like a ping pong ball between both parties. It didn’t stop. I was the buffer. Come to think of it, I still am!

HM: I understand that you recently played a set at Eddies Grub House under your own name consisting of bovver rock versions of classic 80’s new wave hits!? How did this go down?

JJ: From what I saw, it seemed to go down a treat. I had a strong crowd, singing, dancing and clapping—it was nice. I even had my family and close friends in town for the show. It was a great time rocking up all of those 80’s new wave hits. I like to keep it fresh for the people, so as well as performing some tried and true classics, I like to introduce new material to my show. JJ SPEEDBALL is myself but it can also be a full-blown rock band, a solo show, stand-up comedy or master of ceremonies.

HM: Does anyone in the band own up to drinking that much maligned drink known as the ‘shandy’?

JJ: We love shandy! The band was officially formed when Viktor and I went to see a Brisbane Strikers game in 2013. Instead of going to a “carwash” we sat behind the goal posts and chewed the fat. I proposed to him my idea of forming a bovver rock band purely for the terrace glam enjoyment of ourselves. I went through the logistics and asked if he wanted to be part of it. He said YES! Viktor suggested we go to the clubhouse and celebrate this moment in time. I will never forget the silence that fell over the bar staff and crowd when Viktor piped up “Two shandies please!” It was a classic scene, especially in light of how we looked. 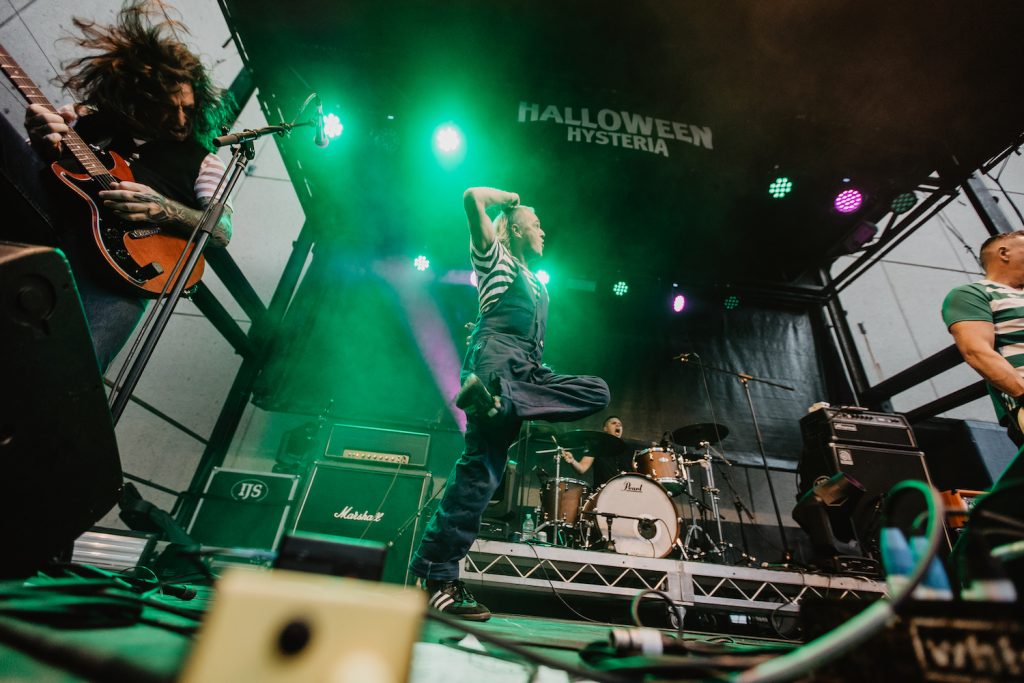 In Australia, there is much debate about the mix of beer and lemonade. Some say the perfect mix is 70/30, Viktor likes an 80/20, some mums love a 60/40. We drink more shandy overseas—‘radler’ (as it’s known in Germany) is popular over there. You can get it nearly everywhere. We drink shandy in Indonesia as well. Everyone who has played in Shandy has had a shandy.

JJ: In 2020, Shandy will be finishing off our second long player Hard Yakka, which will be released through Contra Records in Germany, as well as continuing to put on quality bovver rock performances throughout the year.

Hysteria are pumped to present the triple punch of Jet Boys, Flangipanis and Shandy when they detonate upon The Foundry in Brisbane on Friday, 21 February. Tickets available here.