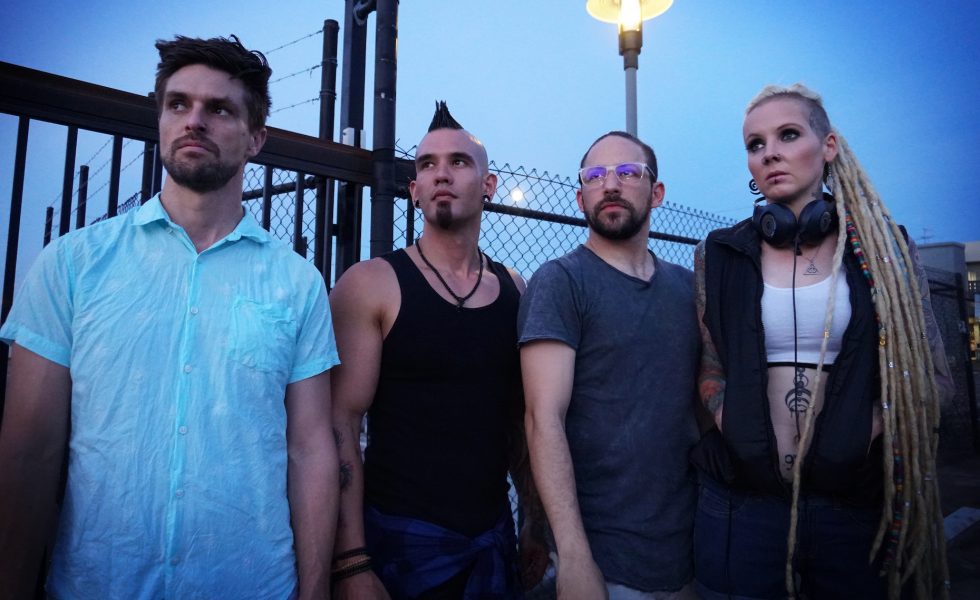 It’s easy to get engrossed in the Lacuna Coil meets The Perfect Circle vibes of Tai Sui’s cosmically cool vibe.

Case in point, the chat with members of the hard-hitting experimentalists, guitarist Churv and vocalist Alexis Tajlia, started a few minutes late, just because it’s so easy to find yourself enveloped by their one-of-kind sound and lose all sense of time. “We’re pretty eclectic–we genre bend a bit,” says Tajlia, an attempt to define the band for those who may not have heard of them. “We struggle a bit online with how to compare ourselves.

“Prodigy, Garbage, System Of A Down–it’s a bit of a mix, really.”

“It never feels like we’re trying to be weird for the sake of it,” Churv adds, “It’s just what comes out. But when asked if they think they are indeed weird, there’s a very pregnant pause while the two contemplate the question. “I don’t think we’re weird,” says Churv, “When we first started out I went around telling everyone we’re a pop band! And when they heard us people were like, ‘I wasn’t expecting it to be so heavy.’ I was like, ‘Oh sorry dude!”

That’s one way to hook in the listeners—devilishly lie to them. “I think we enjoy some of the elements of pop sensibilities, the catchy choruses and things like that,” reasons Tajlia, “but I have to say, I think we are a weird dynamic, but we embrace that fully.”

It would be easy to talk about the wonderfully weird singles Tai Sui have put out– Shadow, Over the Line, Big Pharma and also their 2017 EP Contact, all equally eclectic–but there’s a brand new single in our midst that demands attention—Devito.

I’d rather just put ideas out there and let people explore things for themselves.
[ Tai Sui ]

Devito champions actor Danny DeVito and his ongoing humanitarian efforts whilst exploring the feelings of inadequacy we can experience when feeling ‘too small’ or insignificant to make a difference in the world. It packs character, it oozes personality, and is a thematic number that aims to show that big things can indeed come from small packages. But Danny Devito isn’t many people’s first choice for a voice of the people–so how do Tai Sui then put their own sonic spin on such a subject? ““In just him being such a 4’10” guy, of people feeling too small or insignificant to make a difference or whatever, he’s just a figure of power and fight that we love.”

“Big things come in little packages, as they say.” And ultimately, that’s Tai Sui’s aim to provoke people into thinking about things in areas they might not do otherwise. We’re thinking outside a big little box, here. “I think music is a really powerful medium and I’d like to assume we’re not trying to tell people what to think,” says Tajlia. “I’d rather just put ideas out there and let people explore things for themselves.”

“We’ve done some big subject matter so far with songs about pharmaceutical companies, and on the upcoming album there are several topics that are being explored, but the learning process for us as individuals is to delve further in and learn more, and research, and understand how to develop your own point of view–sort of social awareness music.”

“But we also like writing bangers, songs you can jump around to!” The upcoming album Tajlia mentions, Mada, or Adam spelled backwards, will see Tai Sui stretch their scope for greater thinking–there’s a great reason for the weird album name, and it’s allowed the band an avenue for deeper exploration through art. “There is a little bit of a personal meaning behind Mada,” Alex begins carefully. “Mada was chosen because it spells that name.

“I had a close friend named Adam who took his own life, then a friend’s brother passed away from Cancer, also named Adam. There were three Adams in my life that were of an impact to me, but I didn’t want to be too direct and call it Adam–using the name this way was a personal tribute, I guess.”

Again, Tai Sui have attempted to provoke thought in a different way. “And if you Google Mada, it’s like a Hindi general or something,” adds Tajlia, coming back to the weird. “I thought, ‘Oh well, people will assume what they like!’”