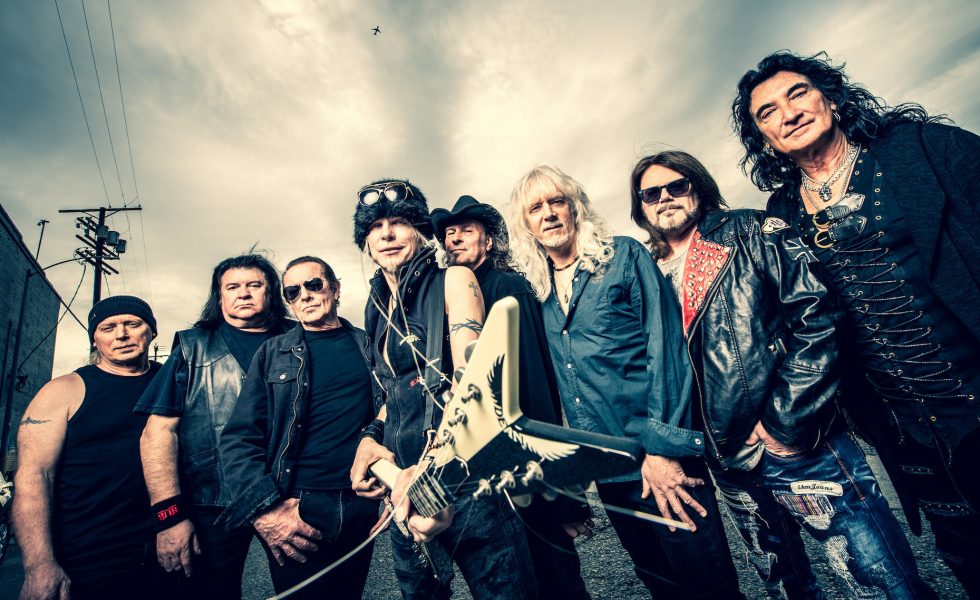 Sep 30, 2019 / WORDS Brian Giffin / PHOTOS Stephanie Cabral / Stay true to yourself and everything else will come to you, and more

At 11 he played his first live show, recorded his first album at 16 and joined the rising British heavy rock band UFO at the age of 18, writing every track on their third album.

By the end of the 1970s, Michael Schenker was both inspirational and highly sought-after as a lead guitarist.

Schenker’s idiosyncratic lead playing, singular mid-range tone and signature black-and-white Flying V instrument marked him as a true guitar hero at a time when guitar heroes ruled. With a laundry list of high-profile admirers from Metallica to Iron Maiden to Dream Theater’s John Petrucci, the late Randy Rhoads, Pearl Jam’s Mike McCready, Slash and others across the rock and metal spectrum, Michael Schenker stands as one of the most unique and influential heavy rock guitar players of all time, alongside Hendrix, Eddie Van Halen, and Rhoads himself.

“In the first part of my life I was just a kid in a sandbox,” he says, talking rapidly in heavily-accented English. “I didn’t compete, I didn’t expect anything, I didn’t look for anything. I didn’t look for success or anything! By the time I did [the UFO live album] Strangers in the Night, people were saying ‘Michael Schenker is God!’ What? And then in the early 80s people were saying ‘Hey Michael, your whole guitar-playing style is unbelievable!’ and I’m like ‘What?’ I couldn’t understand, because I never expected anything like that. I never knew what I’d created. That was done completely unconsciously.”

The first part of his life, as he constantly refers to it, came to a close in 1979. After a brief reunion with older brother Rudolf’s band Scorpions—he wrote two songs and played on much of their breakthrough hit Love Drive, but was uncredited—he struck out on his own, creating the Michael Schenker Group (aka MSG) with unknown vocalist Gary Barden. The next decade and a half was his self-described “experimental” period, one in which he was driven more by creative desire than a need for commercial success.

Stage fright’s a total bummer that just makes you drink. Even though most musicians drink before they go on stage, but to do it on a regular basis, it starts to become a vicious cycle.
[ Michael Schenker ]

“By the time I had done the Love Drive album with the Scorpions, I wanted to carry on with my own vision and step out of the limelight,” he explains. “I was granted the experience of fame very early in life, so I was able to make a choice about whether I wanted to stay in the game for fame or if I wanted to explore. Find an unknown singer and experiment.”

Even then, he was being head-hunted. He turned up to an audition with Aerosmith but took offense to comments from their producer and left, and turned down an offer to join Ozzy Osbourne’s band following the death of Randy Rhoads, who followed Schenker’s penchant for Flying Vs.

While he continued to make albums with various incarnations of MSG into the early 90s, it wasn’t a particularly lucrative period for Schenker. But looking back on it, he doesn’t seem to mind.

“I started something in the 70s that was used by 80% of the guitarists in the 80s,” he says. “By then I already had a wall full of platinum albums. I was in kind of a unique position, and because I’m a trendmaker, I wasn’t really needed in the 80s. I was able to sit back and enjoy myself.”

By then, Schenker had also picked up a reputation for being difficult to work with. Osbourne once claimed he’d had to turn down the guitarist because of his excessive personal demands (a story Schenker rejects), and his history with UFO had been fraught with turbulence. Then there was the whole Love Drive drama that ended up with him leaving Scorpions mid-tour, his entire contribution to that album erased.

I ended up getting everything out of my system, did everything I wanted to do, and now it’s celebration time.
[ Michael Schenker ]

“Instead of saying thank you for helping them with the Love Drive album … they contracted me as the sixth member of the band, but they didn’t put my picture on the album, and when I said I had to go and continue with my own vision, they got so angry that they forgot to say thank you and they left out my name completely! I got no credit, no songwriting credits for Holiday and Coast to Coast, and it only showed me that the ones who are in it for fame only focus on what they can’t get. They don’t appreciate the gifts that come their way.”

Schenker also suffered from stage fright so crippling, he could barely perform without drinking heavily first. “Stage fright’s a total bummer that just makes you drink. Even though most musicians drink before they go on stage, but to do it on a regular basis, it starts to become a vicious cycle.”

“It’s a fest because it’s the third part of my life, celebration time! Suddenly in 2008 something inside me said ‘Michael, I want to be on stage!’ So I was able, consciously, to continue doing what I had begun to do, unconsciously, in the first part of my life.”

To help him celebrate his new-found sobriety, confidence and his third wave of creative output, he decided to get in touch with some of the people he had worked with in the past. Specifically, those from his “middle period”. Considering his difficult-to-work-with reputation, his old band mates seemed to be quite eager to sign on.

The three singers he reached out to—Gary Barden, Graham Bonnet and Robin McAuley—were complemented by a fourth, Doogie White, whom Schenker had also previously worked with. Former MSG members Chris Glen (bass) and Ted McKenna (drums) and rhythm guitarist Steve Mann made up the rest of the band. The group’s first album, Resurrection, was released in early 2018. A follow-up was recorded a few months later, and completed just before McKenna died in January this year. While the first album’s title reflected Schenker’s return from the rock wilderness, Revelation is about the restoration of his tarnished image, which he puts down to the way he was treated by his brother all those years ago.

“He just took Coast to Coast and Holiday, which are my pieces, and copied it and presented it and people thought he wrote those. He didn’t. I gave them to him as a present and he distorted my image, but that’s straightened out now, which is why I called the album Revelation. I never really noticed because I had distanced myself so far from the scene, so I was never really that affected, but the album cover is really about my middle years, because I got slandered, humiliated, trashed.”

Even so, he looks back over his life fondly. He has been responsible for a wealth of influential rock albums, played to millions, invented an iconic guitar tone and popularised the Flying V as a functional instrument.

“Life is a journey, and I enjoyed my whole life and my whole development as a guitarist. From Phenomenon to Force It, No Heavy Petting, Lights Out, Obsession to Love Drive, then onto the battlefield and the thrill of life into my middle years and discovering who I am and to keep developing as a guitarist. Because you never stop, and I never look back. I always move forward.”

“There’s a saying, you know,” he continues, “‘Stay true to yourself and everything else will come to you, and more’. And that’s exactly what happened. I didn’t sell out. I stayed true to myself. I stopped copying others when I was 17 and I stopped listening to other music and just started experimenting with my own music. I ended up getting everything out of my system, did everything I wanted to do, and now it’s celebration time.”