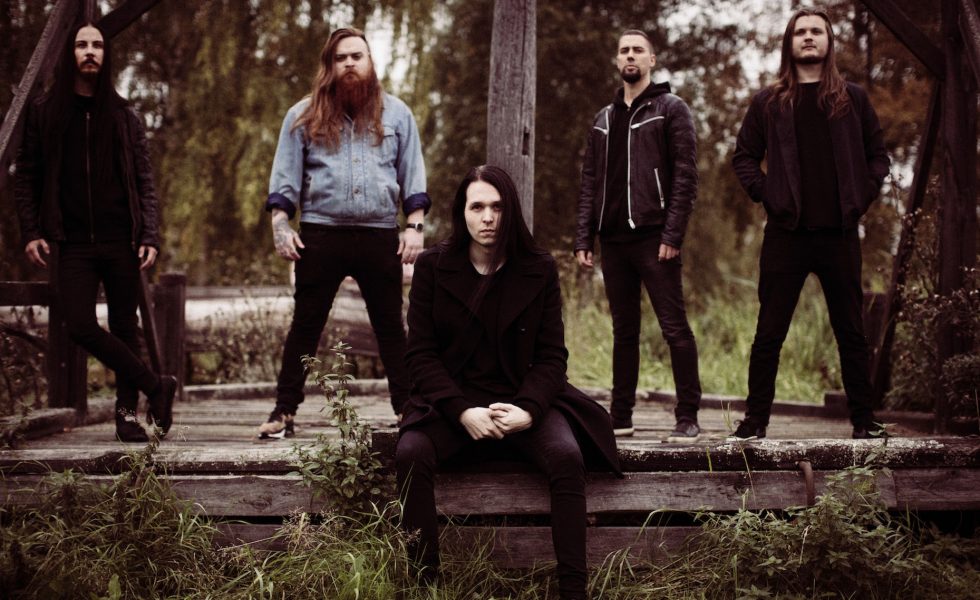 HARD NOISE: LETTERS FROM THE COLONY // At One With Nature

Feb 19, 2018 / WORDS Anna Rose / PHOTOS Ryan Garrison / All the styles of music we liked, we were going to fuse them into a single entity, not be afraid to step on any toes.

Nestled deep in the catacombs of Sweden’s metal scene, newcomers Letters From The Colony unleash their dystopian virtuosic debut album Vignette, a ravaging set of tracks covering everything from shoegaze to math metal with an exploration of nature’s chaotic possibilities and continuing beautiful centre.

MORE: Dead Of Winter – The Freaky Festival Fav Is Back

“It’s a metaphor for quite a few things,” begins singer Alexander ‘Backe’ Backlund, “But when we were working on the title track, nature became a huge inspiration.

“We thought about this possible future scenario where humanity if we keep on going on the same old tracks, and eventually we go extinct and nature creeps from the edges sort of like a vignette on a photography with the dark edges. This is our intro, we thought it was a fitting name.”

A fitting name too as the album very much tells a story and is very dark around the edges. It has elements of brightness, however, that punctuate the perceived darkness beautifully—kind of like the perfect recipe for a cake. It has its different layers but each one is sweet.

Letters From The Colony have elements of death metal shoegaze and even throw a saxophone in there. They are true chameleons of metal, unaware of how they culminate this particular sound, it’s just natural. “In the past we were in a band and it was like, we have to pick a genre–‘Are we gonna be a metalcore band or a death metal band?’ There’s two different schools and they both hate each other but no, with this band we thought we’re gonna do whatever we liked.”

We’re a natural product—we like post-rock bands, death metal bands like Behemoth, so there’s a little bit of everything but it’s not like we were going to fuse this with that. We write whatever we feel like.
[ Alexander Backlund ]

That singular mindset in songwriting has paid off for Letters From The Colony The musicianship you hear on Vignette is of a very high calibre–though merging so many different sounds and styles was not without its challenges. “The dynamics are always a challenge when you have a traditional metal band setting,” says Backe. “We try and move into more like jazz territory with clean guitars and maintain that sort of dynamic while recording and mixing, control the intensity from the peaks, the valleys. That was a challenge, to find the right balance for guitars and drums, to take everything down to easy listening territory then back up to brutal technical death metal–but we nailed it!”

This Swedish five-piece certainly aren’t afraid to push boundaries in sound going so far as to sample the natural roar of a woodland deer in a bid to be truly original and ambitious. “I wish I had a good explanation,” Backe laughs. “Sebastian [guitarist Sebastian Svalland] was watching Animal Planet one day and realised, ‘They sound really nice, I wanna have that in a song!’ It’s something that’s been with him for a really long time.”

“When our day came to finally do it, he was researching the kind of calls male and female deer do, searching for the perfect volume set for days. It’s just one of his ideas but it played well with the nature theme we had with the album.”

Backe’s vocals in Vignette are far from generic death metal, a steady volatile aggression that too, weren’t without hurdles having to work with instruments outside the standard five-piece band. “It was definitely a challenge, I was into everything. It’s happening all the time through all the songs.”

“There are these huge instrumental sections because I couldn’t, in good conscience, put vocals on them because I wanted the guitars to be the main focus. With my vocals it was a challenge to scale everything down and not over do it because there’s already tonnes of stuff happening in the music and it’s like, you don’t want six layers of vocals on top of that. Keep it simple, which is hard. But I’m a musical guy, I love music theory.”

Varying time signatures and math metal vibes, having a fondness for the foundational structures of music results in a debut album like this and bodes well for the band’s longevity. “So many vocalists have left before because even though they were great screamers, they couldn’t wrap their heads around the arrangements. I’m just taking time with the pulse of the music.”