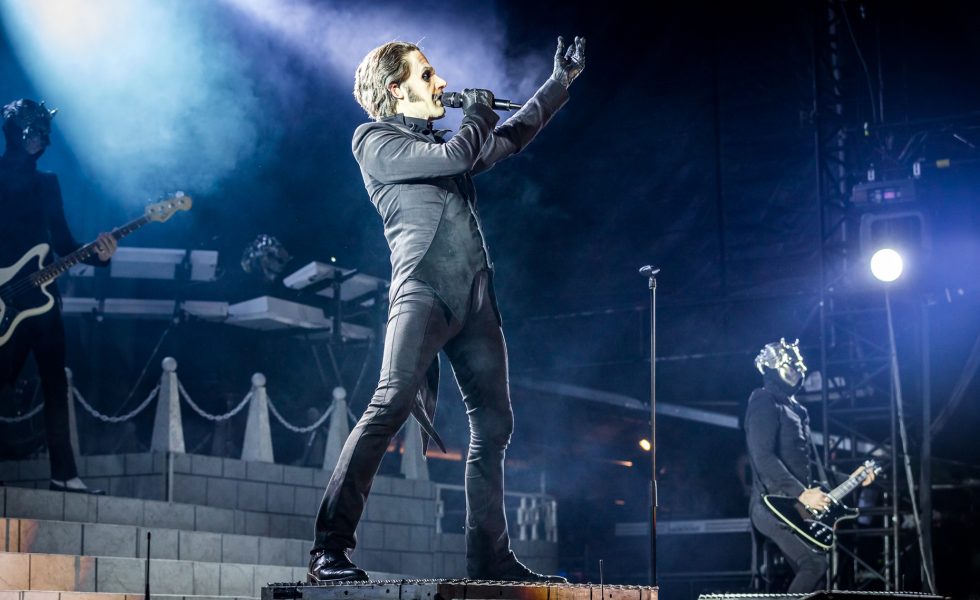 At Download Australia this year, Ghost had the toughest gig of all. Playing at the same time as Slayer. At the last time Slayer would ever play. Ouch.

Tobias Forge, aka Cardinal Copia, must have marshalled all his diabolical powers to pull punters away from the last chance to experience Raining Blood or Angel of Death. Ghost’s singular blend of pop and apocalyptic metal is a sight and sound to behold. The flock is shepherded by the mesmeric Cardinal Copia as bandleader and high priest of sin. Cardinal Copia might be a character in an elaborate charade; but what of the man behind the vestments? Talking to Tobias Forge out of uniform and relaxing against a boudoir-like velour booth trimmed in a royal purple, he sits cross legged, wrapped in leather battle-jacket. He’s unassuming. He wears well-combed hair that doesn’t touch his ears. Ripped jeans at the knees and a Voivod Dimension Hatross t-shirt. If you didn’t know what he looked like, you’d never guess he led a worldwide congregation of metal fanatics. Even so, Ghost’s many influences he wears on his lapel: King Diamond (of course), Kreator, and a mandatory Slayer badge. So what lent Mr. Forge such reverence for the arcane and black arts? We find out in a post-Download audience with the Cardinal …

How were the shows? Playing up against Slayer must have been a rare honour and challenge.

It was what it was. We did this for a higher purpose, and that is to come back and do the full thing.

Was it a success giving Australian fans a live taste of Prequelle?

Wow, it has been a long time.

The goal was to get back here and get the promoter to understand that you need to get us back and not play a festival. That was my only goal of coming.

In Prequelle, the album touches on the black death and apocalyptic themes. The end times. With so many crises happening around the world today, would you be forgiven for thinking the same thing today? 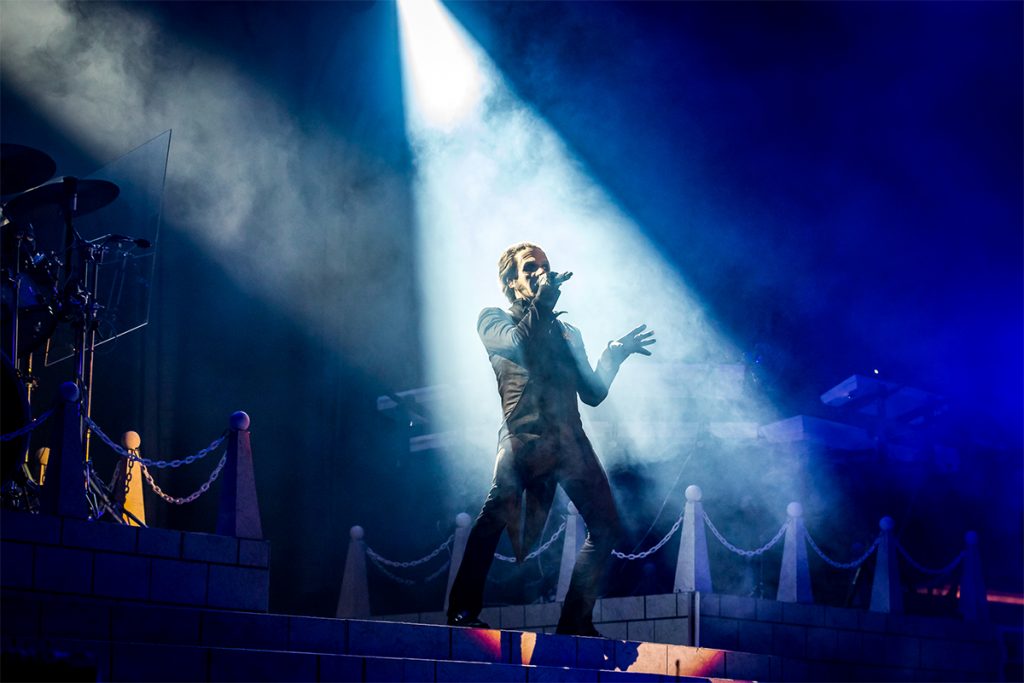 I think the guy in charge as of this moment is obviously a great example of worsened rhetorics. I think that the risk of having him around is obviously multiple different things, but I think it’s the idea of refraining from sophisticated sort of politics talk that is sometimes still needed. There is a certain code, there’s a certain mannerism that I think is worth learning. This goes from everything from a 12 year old talking to a 90 year old. You just need to shape your lingo in order to be able to manoeuvre yourself between different age groups and different people. I speak to, in one way, if I talk to my buddies, I speak in a different way than if I talk to a 65 year old executive. I think that that is an art form, and that most people should master it in some way or form.

I think that if you have a so called master in charge who looks down upon that, shuns away from that, I think that that’s remarkable. Now I’m obviously just talking about rhetorics and linguistically, but I’m talking about the, as you say, rhetorics and how you speak to the world. I understand that a lot of people like politicians that say direct things and is witty and all that. Yes. Let’s move forward, but I think that there’s also a level of levelheadedness that I think a politician should do. I think that this is just a side step. It will probably go back a little bit to what it is in the rest of the world and what it has been before.

Ghost talks about fire, hell, and brimstone—is that a place you have thought about? A physical manifestation of hell?

Ever since I was a very little kid, I’ve always been interested in religion, and specifically obviously Hebrew religion, just because I grew up in a Christian country. Cinematically as well, I grew up watching a lot of biblical films. I’m talking about The Ten Commandments, Ben Hur, stuff like that, The Temptation of Christ. So, I’ve always been very fascinated by things like that. When I came into adolescence and started getting fascinated by occult and satanic themes, of course, I’m an imaginative person, so I do have a lot of visual fantasies about what it is or could be. But my fantasising aesthetic younger self is also holding a little bit more of a rational grown up person, and we’re struggling together to try to figure out how things are. But I could sit here and ponder ’til my dying days, because I have no idea. No one else knows, anyway.

For me, writing Satanic lyrics and throwing around upside down crosses and pentagrams and goats and all that, for me, is so natural that it’s not as much of an appliance as it was for people in the Satanic panic, 1969. Because then it was something that you did because it was groovy with your 20 year old friends. You were also 20 years old, and two years ago you didn’t even know what Satanic was.
[ TOBIAS ]

The limited view of Scandinavian spirituality, we get from black metal. The Hel Vete circle. Church burnings. Those on the outside assume Scandinavia is this region steeped in Christian dogma and practice.

Yes. From a greater political point of view, Christianity has not been very dominant in Sweden in the modern day and age, but more on a local and municipal level. Where I come from, there were and there are still more mundane forces in society that is controlled by church or churches. They’re more private churches like that.

So it’s not like Poland, where Catholicism is so intertwined with civil society. Which makes Nergal of Behemoth such a vocal anti-theist, I suppose.

From a little person point of view in a little city, there are definitely things that I have, throughout my life, been rebelling against. But Sweden is nowhere near … we don’t really have the same Christian church presence from a law making point of view that they have in Poland. I come from a pretty secular country where you can basically say almost anything you like.

Yeah. There are obviously some PC things that sort of makes certain things not okay, but anything that has to do with Satanism and all that, that’s fine.

Satanism seems to be a bit old hat now. People are shocked by seemingly more mundane political things these days.

Yes. I mean, of course. This is a conversation that I have more than often when I am outside of Scandinavia, because I’ve never regarded Ghost as being that provocative. Because I come from, again, a secularised country where freedom of speech is quite cherished. I come from a country where metal has always been very strong, where black and death metal had a big proving ground. Also, it’s part of my DNA, since I’ve been a rock fan for as long as I can remember. I’ve been a black and death metal fan ever since I was 11 years old, something like that. For me, writing Satanic lyrics and throwing around upside down crosses and pentagrams and goats and all that, for me, is so natural that it’s not as much of an appliance as it was for people in the Satanic panic, 1969. Because then it was something that you did because it was groovy with your 20 year old friends. You were also 20 years old, and two years ago you didn’t even know what Satanic was.

So, for me, it was never meant as a, “This is a way to upset mainstream media.” Never, because I didn’t even thought that we were going to be in anything remotely like any mainstream media. Whereas in America now when we have achieved some sort of mainstream following, they regard sometimes our image and my choice of presenting myself and then the band as radical, provocative imagery. 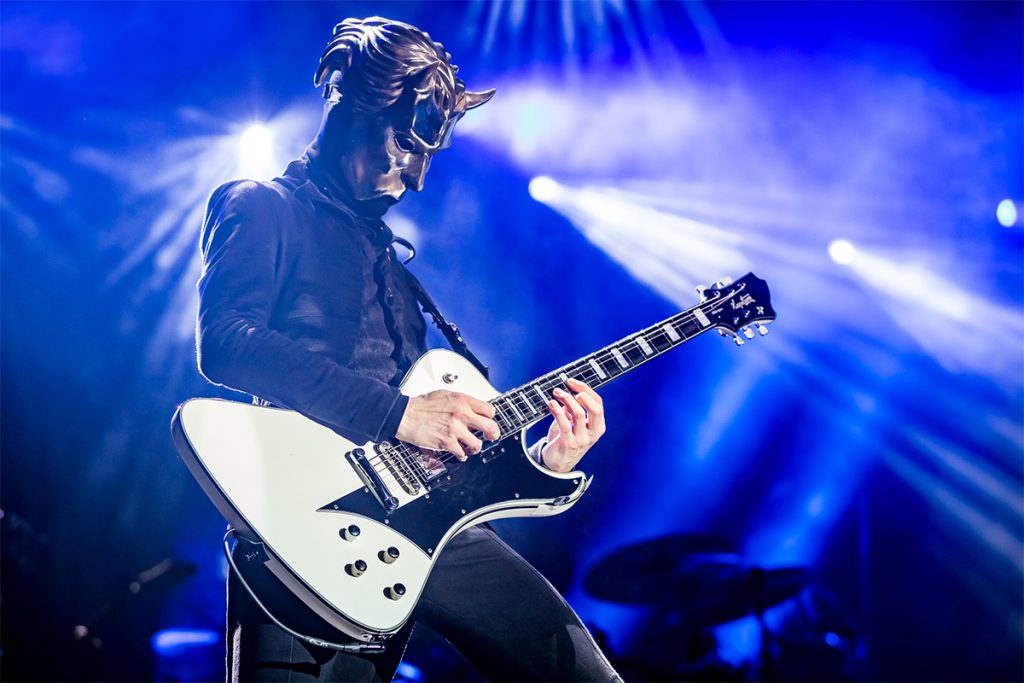 Yes. I understand intellectually, of course, that it’s regarded like that, but that was never the intent. I find it more mind boggling that a lot of the provocation that we cause is actually within the metal realms of people who are puritan and have a hard time labelling us what we are and why we are metal or not.

So the puritanism comes from certain sections of metaldom itself; thou shalt not mix pop with metal. That kind of thing.

From a progressive point of view, yes. But if we were talking about old school death metal, I would be very opinionated in a way that would probably come off as similarly closed minded. So, I completely understand where those tendencies come from, so I don’t grieve that someone doesn’t like us because we don’t sound as metal as Mercyful Fate does. It’s like, “It’s fine.”

We’ll be touring consecutively ’til the end of the year, and then I’m due back in the studio in January. Between January and May, I hope that we will be doing a few minor tours, possibly returning here. That’s my goal for at least here, to come back within this album cycle and do it properly. Happy?