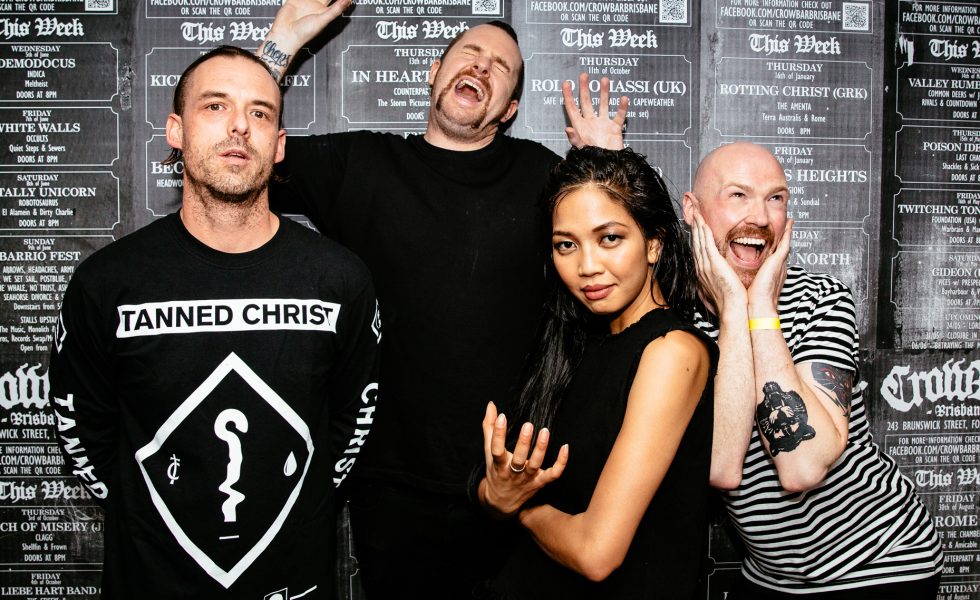 July 2015: High Tension have been killing it of late. They’re just left the entire nation of Australia mega-satisfied after a massive co-headlining tour with grindcore heroes King Parrot and dropped their second full-length. It rules … God, High Tension rule … Oh, I got distracted. What was I saying? Oh yes, the new album is good, but the band’s live show is better. But how do they keep it so tight night after night?

Before they get in the van for the Bully album tour, frontbeast Karina Utomo hits up Hysteria to reflect on her years of touring experience, and High Tension’s recent run with Paz, to tell us what she’s learnt about making life on the road bearable. And making sure, whatever happens, the show never suffers. So, without further adieu, you’re about to witness the power of street knowledge.

I think it’s really hard to find food that tastes good. I think that’s one of the main issues when it comes to touring. So my tip is to carry hot sauce, and just put it on everything. It makes everything taste better. Also, on this last tour, because there weren’t many vegetarian options—and although I’m not vegetarian, I like to have a lot of vegetables. So instead of settling for a Chiko Roll, because the cabbage doesn’t really count as vegetable, we’ve actually been stopping at supermarkets in regional towns and getting stuff that’s easy to eat, and that you can easily cut with a pocketknife. Cucumbers, celery, cherry tomatoes, baby spinach. Stuff you don’t need to cook and so you can still get your nutrients.

That’s really important for me as a singer. The thing that actually makes me lose my voice is not the style of singing, but getting sick.

I carried around fresh ginger in my bag on this tour. And I was eating heaps of raw ginger and made Matt and Damian do it too. They both had man flu on tour and that really helped them. Because it’s really good for you. 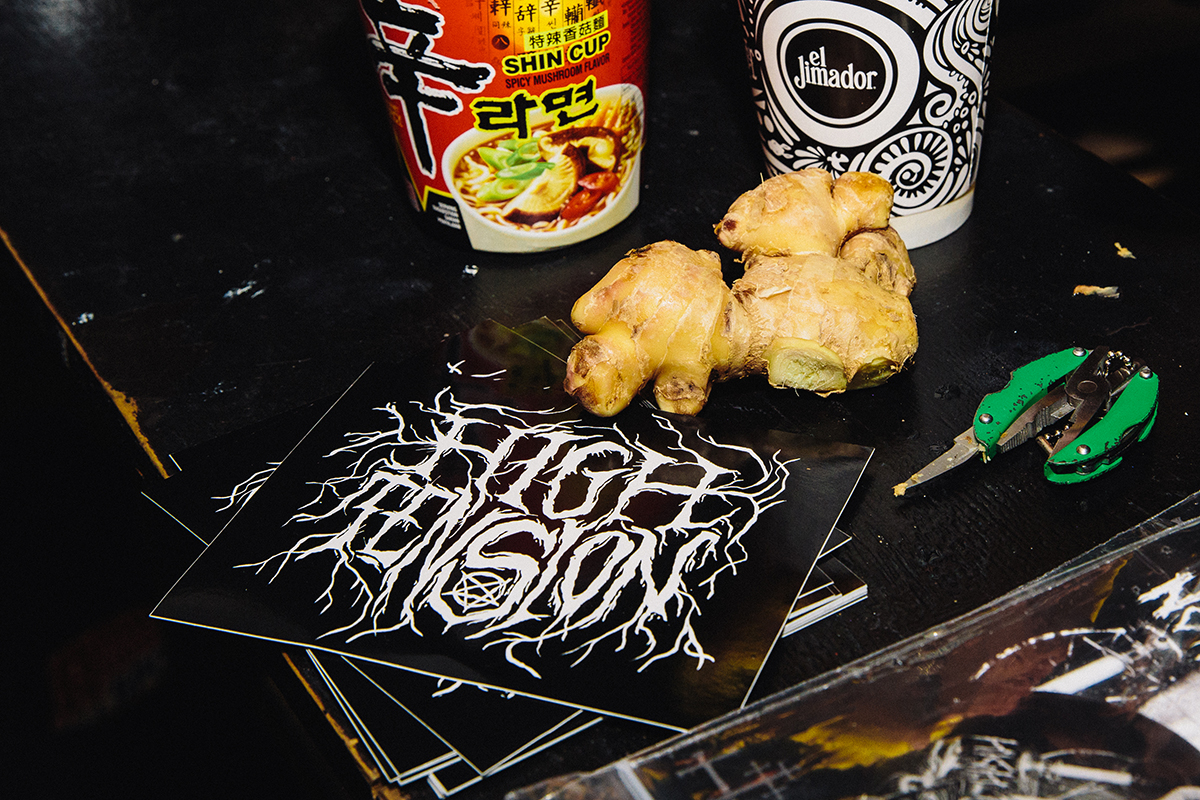 TENSION TOUR TIP #2: SLEEP WHENEVER YOU CAN, UNLESS YOU’RE DRIVING

Damian picked me up and he was in his tracksuit pants and this thing he calls his ‘sleeping hat’. It’s this fuzzy thing that makes it look like you’re a stingray … It’s basically like a big pillow that you put over your head that has a hole for breathing. Basically you put that on and you can sleep anywhere. If you bump your head you’ll be OK. Bascially just have lots of comfortable stuff on tour. Because you probably need to sneak in some sleep if you’re not driving.

TENSION TOUR TIP #3: WHAT WOULD MACGYVER DO?

I have this five-in-one tool. It’s like pliers, cable cutters, Philips head screwdriver, flat-head screwdriver and a mini knife. It always comes in handy … People are like ‘why do you have cable cutters, you’re a singer?’ But if someone else forgets theirs and they can’t change a string then it’s fucked for the whole band. So on this last tour I used the pliers to take out a big splinter that Ash had that was in his playing finger. 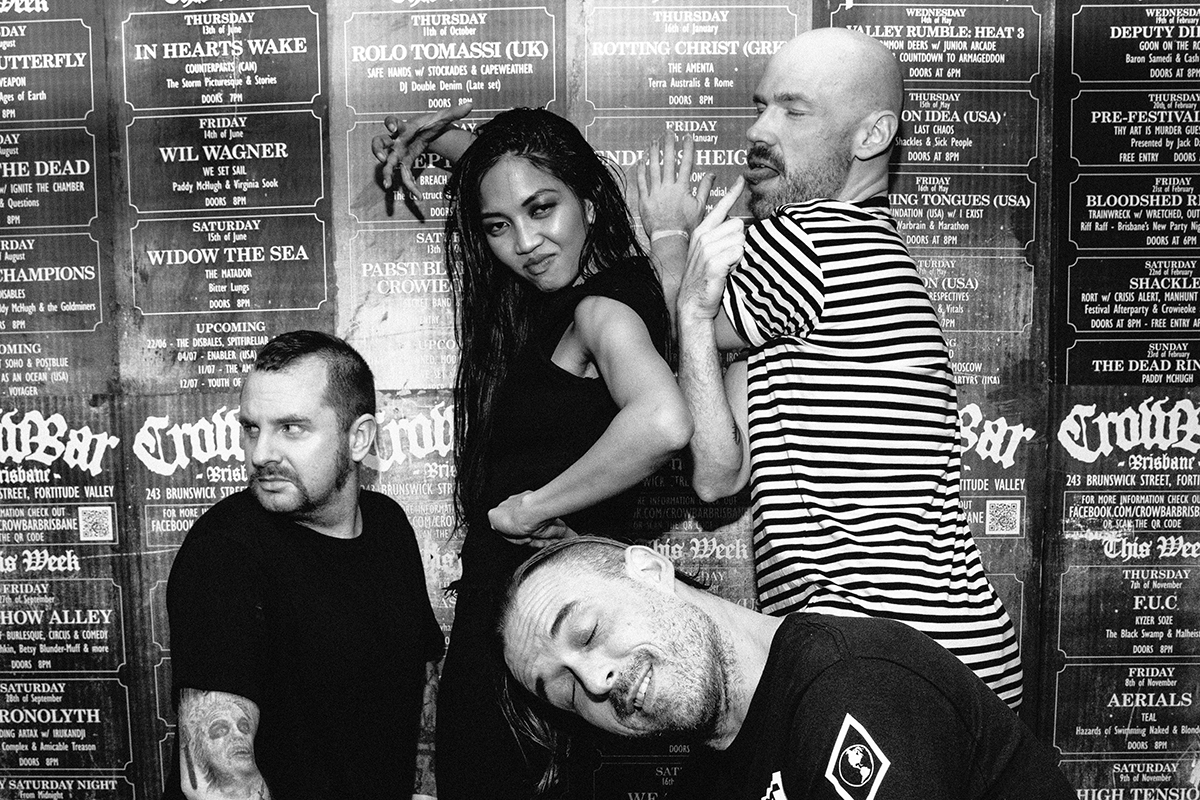 TENSION TOUR TIP #4: PUT A SMILE ON YOUR DIAL

Be funny. Don’t be sad, there’s nothing to be sad about. You’re on tour. And to begin with, you wouldn’t be in a band with shit people so just have some fun … And it’s pretty self-explanatory but don’t be selfish when you’re on tour. Think about the other people in your band. Ash would always get us coffee when he got coffee because he would always be up early. And that was really nice. We also have a rule that the person who’s driving has free reign over whatever music is playing. Except, of course, if their music is shit then we’re allowed to put headphones on. But if you’re sitting in the front seat you’ve gotta keep the driver company.

You know those cupboard divider things … It’s like you can get them from wardrobe organising places or IKEA. They’re like cubbies that flatten to nothing for your cupboard. I wish we had that for our merch. So then you can sort everything in sizes and it doesn’t take up room. I think the most annoying things about doing your own merch is one, you’ve got to do it. But two, just trying to find shit from a suitcase. Especially if you’re the support band and there’s minimal space for organising. 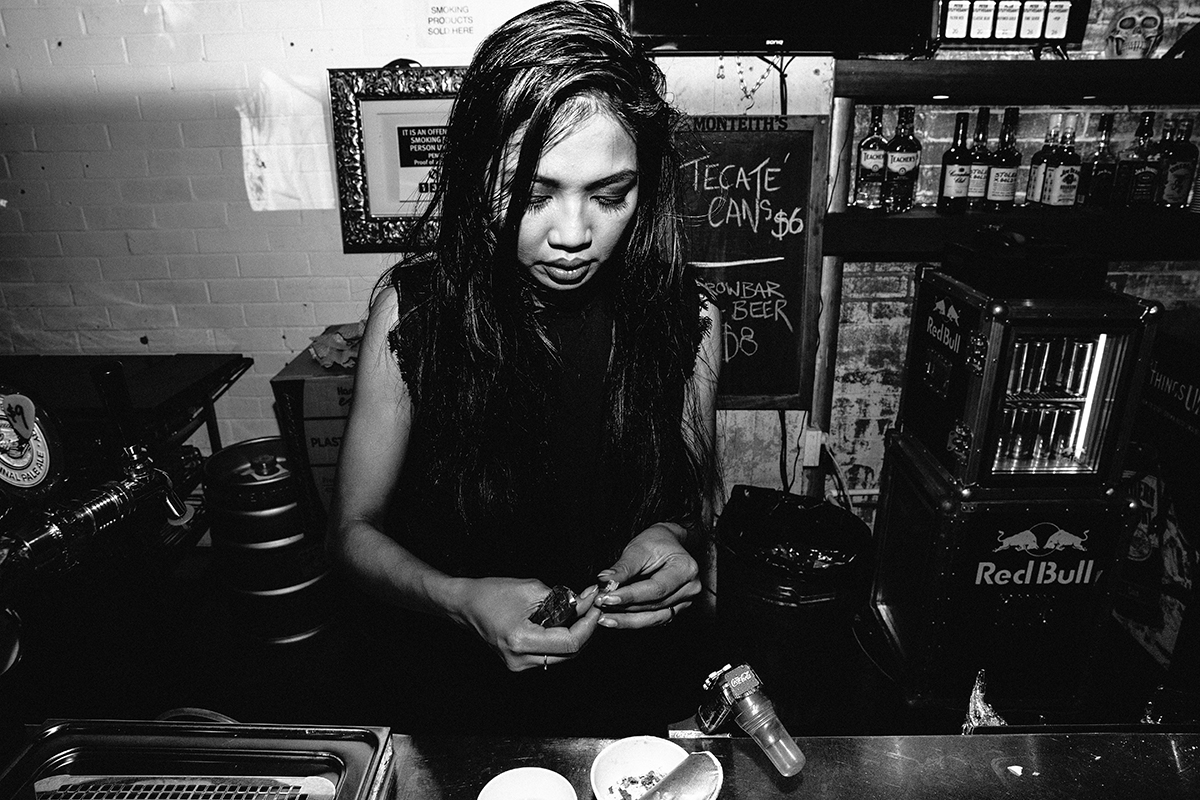 If you’re staying in a hotel or whatever, try and get a place that has a washing machine. That’s really important. Because it’s important not to stink on tour. That makes it shit for everyone … I’ve actually recommended that we make High Tension socks so that way when we run out of socks we can just dig into the merch bag. And maybe High Tension jocks as well. But socks are pretty integral … Though we always seem to manage to be able to stay in places with washers and dryers and that. And if you go and just do a load of laundry for everyone it’s pretty good. We’ll make time to do stuff like that, because it’s so nice when you can put on a nice clean shirt or nice clean socks.

Also, don’t do what certain members of other bands do, if you’re a drummer and you’ve just played, don’t just put your clothes in the dryer without washing them first. Because that’s very bad. But, I won’t tell you who did that …

The whole point of touring is to make sure the shows are good, it’s not about you. The people who have come to these shows … you meet people who have driven two hours just to watch you play … But how shit would it be if you rocked up to some town and were like ‘urgh, this is going to be terrible, I’m just going to be really hungover and be shit’. But it’s not about you, so I think it’s important to stick to the bigger picture. The whole purpose of you being on tour is to play for a bigger audience. Be good. Don’t be shit. Don’t be a dick. It’s all really simple stuff. 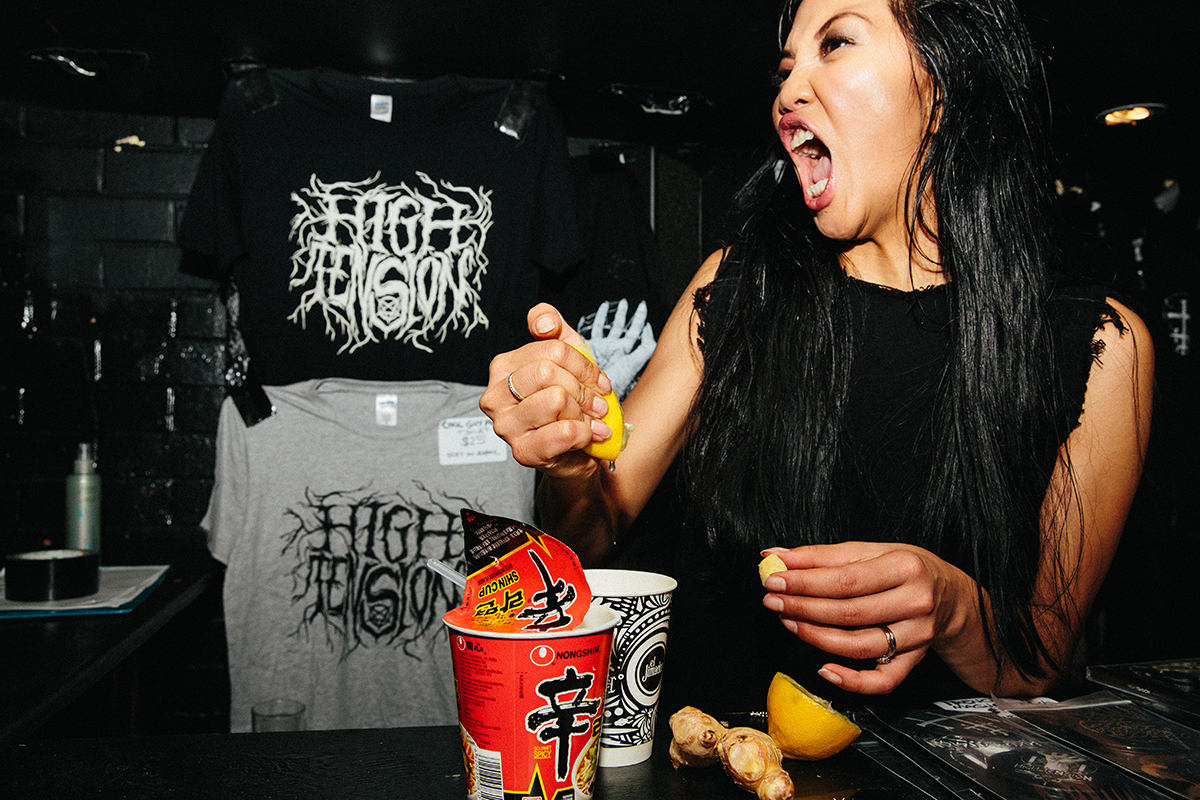 IN THE KITCHEN WITH KARINA

Karina says noodles are her ultimate pick-me-up food. When she was a kid she used to eat them on the way to school. Now she’s older and perfected the recipe.