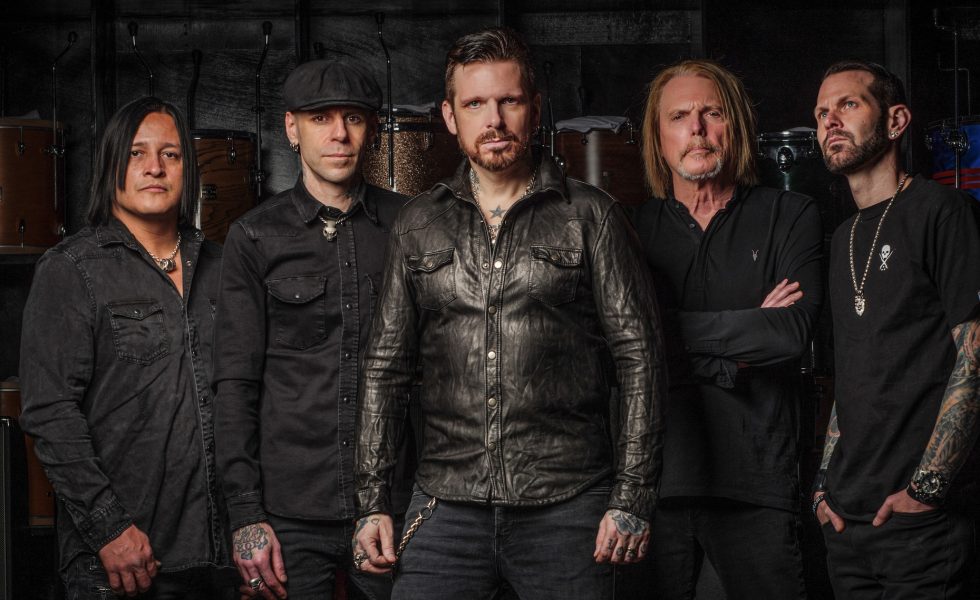 Christian Martucci is somewhat of an unknown commodity in Australia.

Despite having played in bands such as Black President, The Chelsea Smiles and with Dee Dee Ramone in his native America, it wasn’t until he started collaborating with Corey Taylor and playing in Stone Sour in 2015 that his reputation as a guitarist grew.

Earlier this year he replaced guitarist Damon Johnson in Black Star Riders and is currently preparing himself for the release of his first album with the band which features Scott Gorham and Ricky Warwick from the legendary Thin Lizzy.

“I’ve been a fan of the Black Star Riders for some time,” he said. “Not only because of the Thin Lizzy affiliation, but also because I truly felt they were doing something special in their own right. Jay Ruston, who mixed some of their previous albums and also produced Stone Sour’s Hydrograd tipped me off that they were looking for someone. I jumped at the chance as fast as I could and had some great conversations with Ricky while I was on the road. They auditioned a bunch of guys. I was on tour with Stone Sour at the time so I sent in a video of me playing a few of their songs. I guess they liked what they heard so we just moved forward with it.”

After Gorham initially held reservations about Martucci during the audition process, he changed his tune after hearing what Martucci had done with Stone Sour.

“I have nothing but love and respect for Corey,” Martucci said. “He, along with the other members of Stone Sour, gave me the opportunity of a lifetime and I’ll always be indebted to them for taking a chance on me. Scott Gorham is an amazing guy, who has played alongside some of the greatest guitar players in the world. To get any sort of thumbs up from someone like that is not something I take lightly.”

Another State of Grace is due for release on 6th September, with Martucci quick to deflect attention away from himself and onto the music.

“The album is a combination of everyone’s ideas that just seemed to flow together effortlessly,” he said. “If you’re a fan of Black Star Riders you won’t be disappointed. We stayed true to the sound of the band and added a few surprises! I was a fan of the band before I joined. My main goal was not to ruin it haha. Damon is big shoes to fill but luckily chemistry was on our side and I’m very proud of what we accomplished. There are a few twists and turns on the album. We really took the time to explore what each member is capable of.”

I think when you’re replacing someone who’s no longer in a band you have two choices. You can either be a carbon copy of that person, or be yourself and hope that it gels.
[ Christian Martucci ]

To complicate the process even more, drummer Chad Szeila (Breaking Benjamin, Black Label Society) also makes his debut on Another State of Grace, but Martucci stresses that both newcomers were confident in their ability to perform under the pressure of expectation.

“I think when you’re replacing someone who’s no longer in a band you have two choices. You can either be a carbon copy of that person, or be yourself and hope that it gels. Chad and I are definitely the latter. You can’t be someone else, you’ll never sound like someone else, and that’s ok. Fans can see right through that sort of thing. What we bring to Black Star Riders is an appreciation of what they were before we joined, without losing our own identities as musicians.”

One of the key elements of Black Star Riders sound is their dual lead guitar work, more along the lines of old school rock than the heavier end of the scale where Martucci has mostly lived. Following the departure of original guitarist and founding member Johnson, long term fans were initially left pondering whether the style of Martucci would adapt to the less metal approach employed by Black Star Riders but Martucci insists he had to make only minimal changes to continue the legacy.

“Actually no,” he said in regards to having to alter his playing style. “With Stone Sour I had to somewhat adapt my style to theirs, which was a fun challenge. Since I grew up playing mostly classic rock and punk rock, playing with Scott for me is like having two extra hands (laughs). Very good ones I might add.”

With the issue of gun ownership once again prominent in the American media, one of the albums slower tracks, Why Do You Love Your Guns is particularly poignant, being written in the aftermath of the Sandy Hook Elementary School shootings in 2012 that claimed the lives of 26 people—20 of them children aged between six and seven years old.

“Lyrically you’d have to ask Ricky about that song,” Martucci said. “What does it mean to me? I’m not an anti-gun person, but I’m definitely and anti-asshole person. Unfortunately for gun owners, there are some real nut cases out there. The song makes me think of the reaction some of these people had when the shooting happened. Instead of having sympathy for the families they chose to be dicks about it, some even saying it never happened and was a fraud. As a parent myself I found that response to be tasteless, heartless and disgusting.”

Aside from the new Black Star Riders album, Martucci has also recently released his solo album, Negative Balance, an album made up of songs he wrote that until now had not found a home with any of his previous bands.

“I wrote a bunch of songs that didn’t really fit with either band and wasn’t sure what to do with them,” he said. “As time went on I would occasionally listen to them and just felt like I needed to get them out there. I ended up reaching out to drummer Karl Rockfist (Michael Monroe Band) and Acey Slade (Misfits/Murderdolls) to track the songs for real. We were so happy with the way it came out that we just decided to roll with it. I don’t know how many solo albums I have in me as busy as I get with the other bands, but I had a blast with it and could definitely see myself doing it again in the future.”

Black Star Riders’ new album Another State Of Grace is out 6th September.