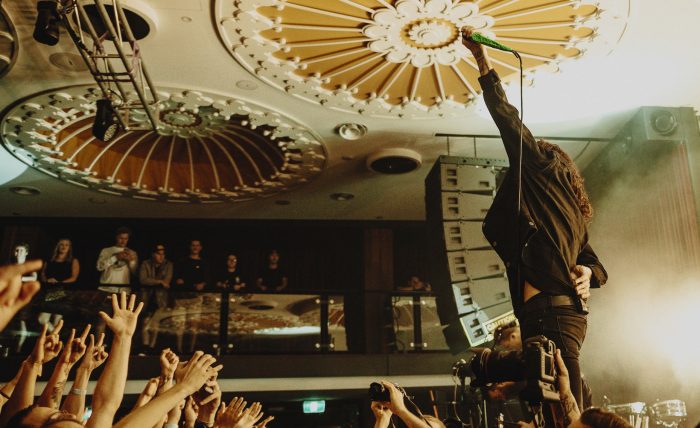 Before the show, at 7/11 getting some munchies to take inside, I run into a guy I went to high school with. We sat in study groups and listened to Underoath. They’re Only Chasing Safety was constantly playing in those days. A Boy Brushed Red Living in Black and White, man, that was an anthem. He introduced me to his wife who was with him, she was a teacher and they had a kid at home with a babysitter. It was a nostalgic shock of realisation: The Rebirth Tour was kind of a big deal, huh. Underoath hadn’t played in Australia since Soundwave 2012 and before that they supported A Day to Remember in 2011. I don’t even remember their last headline tour down here. So yeah, maybe tonight does warrant a sitter.

Walking in I overhear a conversation between a couple of guys having a smoke, one of ‘em says, “This will be the sixth time I’m seeing Underoath,” as he ashes his ciggie, proudly sporting his hopelessly worn out Underoath 2008 tour t-shirt. Even for him, tonight is the first time the band will play both of their most important and critically acclaimed albums, They’re Only Chasing Safety (’04) and Define the Great Line (’06), back-to-back, in-full, on Australian soil.

Despite the 1000 or so people at Eatons Hill early for sleepmakeswaves, only one show on The Rebirth Tour had sold out to date. For a band once selling out venues worldwide at the height of the success of the records we are about to bear witness to tonight, it’s a little disappointing, but the night, and the tour, was still in its infancy.

Sleepmakeswaves is the first and only support act for The Rebirth Tour, and although they are an odd selection in terms of genre, they bring it early. Bass player Alex Wilson jams across the stage with spontaneous energy, a bald, bearded package of vitality and notable presence. Tim Adderly looks like Animal from the Muppets behind the kit; his long hair hanging over his face, long limbs dangling like a loose stringed puppet; looking like an old, scruffy yarn ball attached to his body by a thread; rattlin’ the snare with a vicious tendency for making loud noises: the driving clarity of the bands post rock meanderings. 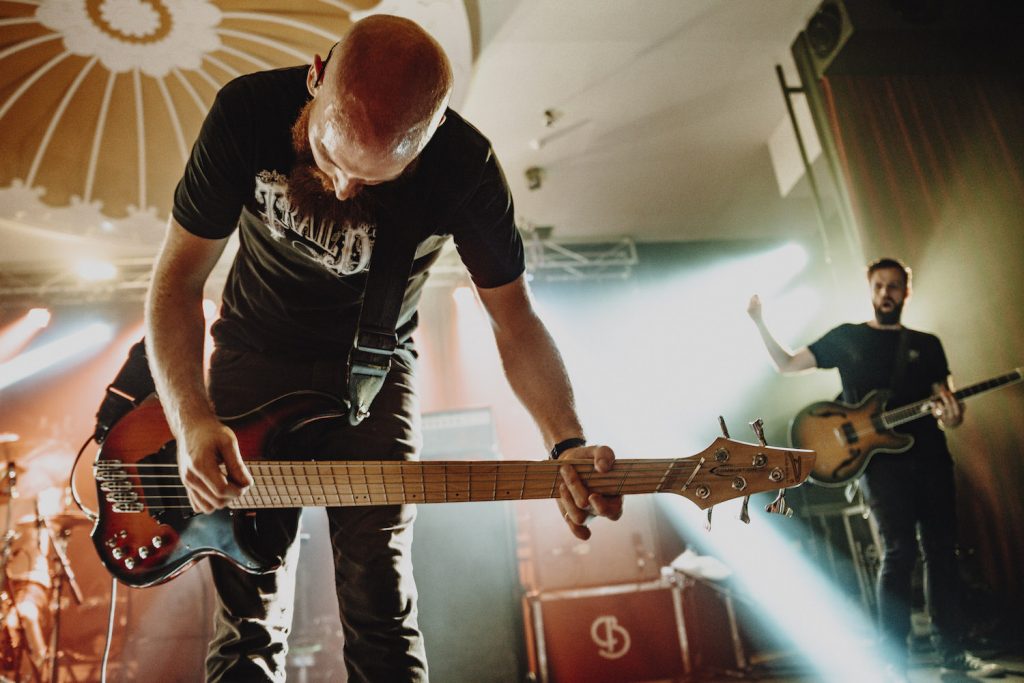 They’re amazing; I love them. So does the dude a few rows in front of me by the looks of it: eyes closed, letting his body go so loose to the music he almost spilt his beer (he could, quite, possibly just be rolling, though. He’s one of a few who seem to be digging these shoegaze vibes). It’s great ambient, progressive post rock music and it really doesn’t belong here, which sucks, ’cause they deserve more. It would have been better seeing them in a fortnight’s time alongside Explosions in the Sky in a venue like QPAC or the Opera House. With no lyrics or vocals to command any authority over a crowd who literally paid money to come to a venue and be yelled at/yell at each other, they don’t have the tools to soar above the constant chatter of the uninterested crowd, or to get the attention or the respect they might playing a Moving Mountains show.

Outside, between sets, the courtyard is full. Opposite me I spot a couple of punters sitting cross-legged on the grass, both sporting Underoath tattoos on the inside of their forearm. It’s quiet and slow out here, at least compared to the echo chamber of chatter and dense wall of people inside. The calm before the storm, at least for the 30 minutes it existed before drummer/vocalist Aaron Gillespie walks on stage in a denim jacket cut off at the sleeves and gives the crowd a smile and shaka (brah).

Taking his place behind the kit, the rest of the band emerges, and within a few seconds they launch into Young and Aspiring to smoke machines and strobe lights, then A Boy Brushed Red Living in Black and White to a flickering show of red-and-yellow lights and the sight of a sea of human hands floating across the crowd. 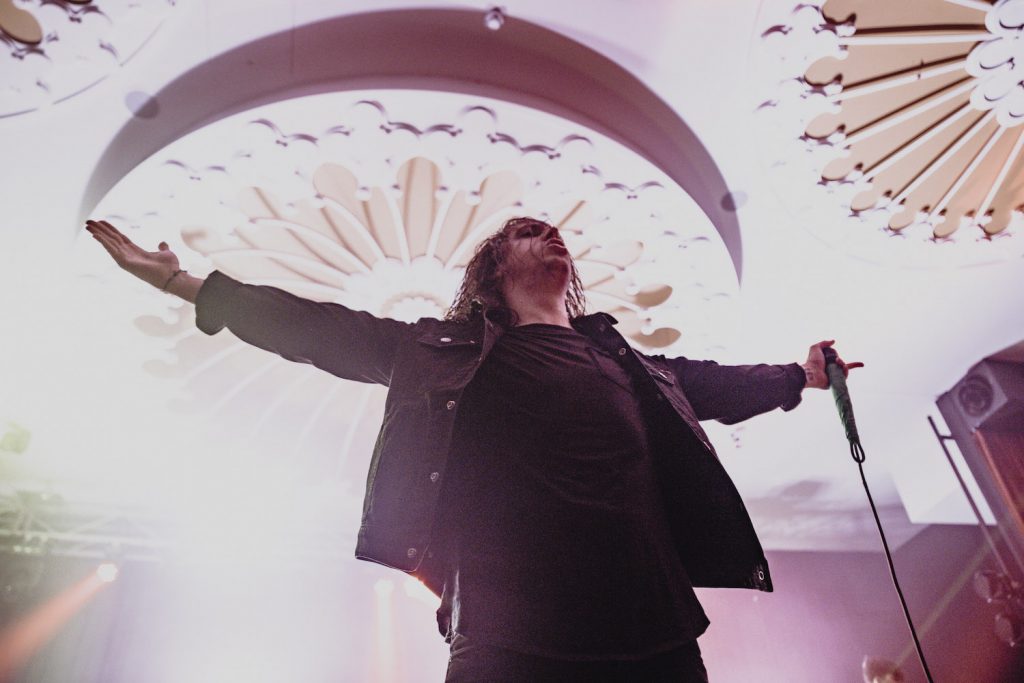 The rest of They’re Only Chasing Safety follows, as expected—as we had hoped. It’s Dangerous Business Walking Out Your Front Door and Reinventing Your Exit are highlights, proving that vocalist Spencer Chamberlain can still scream and perform among the best of them. He sounds the same live as recorded, even when he has to strain to cut over the sing-backs from the crowd, in a way demands Underoath be considered/remembered as one of the premier bands of a genre they were pivotal in defining and popularizing.

They move through the record, I’m Content With Losing and Down. Set. Go. (the first time the song has been played live in Australia), commanding phones be swayed along, before a short intermission to regroup for the second segment of the evening: Define the Great Line.

Chamberlain comes back out and they start the carnage all over again. “Everybody jump,” he commands, and so everybody does. And for the rest of the evening, that’s the way it stayed. What Spencer asked for, he received: the crowd clapping, singing and jumping along in a violent trance of decade old post-hardcore music. 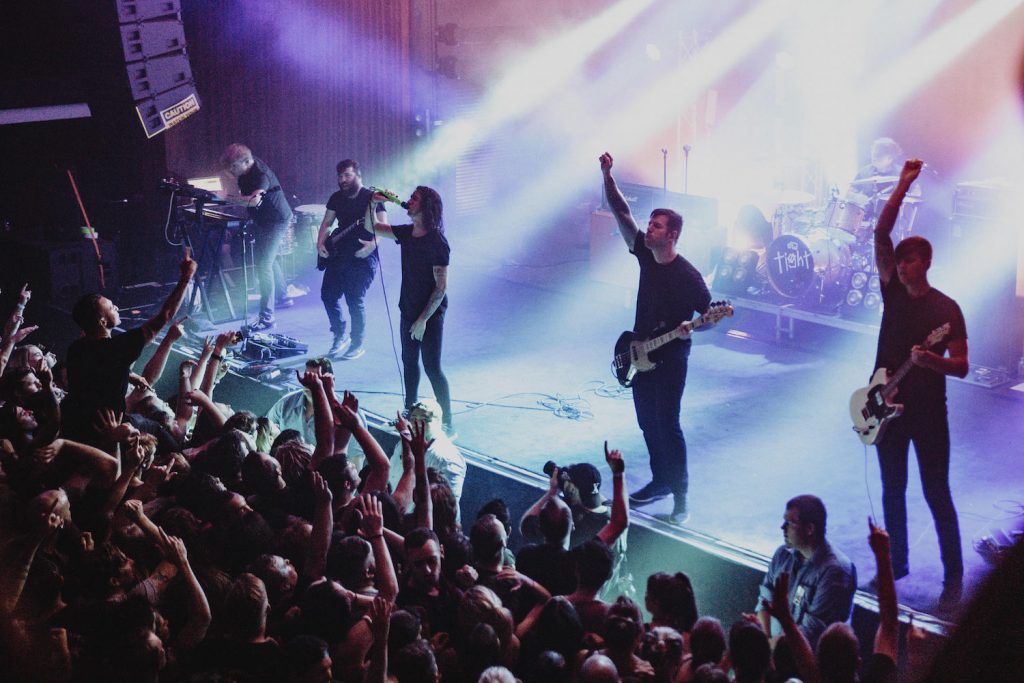 One thing that’s obvious about Underoath after all this time is their professionalism—particularly Chamberlain, and how he orders respect and attention to the band by his dynamic and self-assured stage presence. He’s specialised, proficient and experienced, and honestly, I’m surprised his voice still works the way it does after performing at this vocal range, at such high caliber, for so long. It’s clean and polished, but oh-so-fucking-dirty, baby. Like his lungs are made of perfectly round rusty pipes that howl in tune with his own anguish and agony. His range of vocal gymnastics on display through Define the Great Line are controlled without any strain or effort, especially to sound so rough and aggressive but triumphantly pristine. This is why they reigned the scene supreme: because Spencer Chamberlain sounds like you would if you’re being pulled along the street by your scalp, scraping your nails in the sidewalk, wailing like an angel in desperate terror. 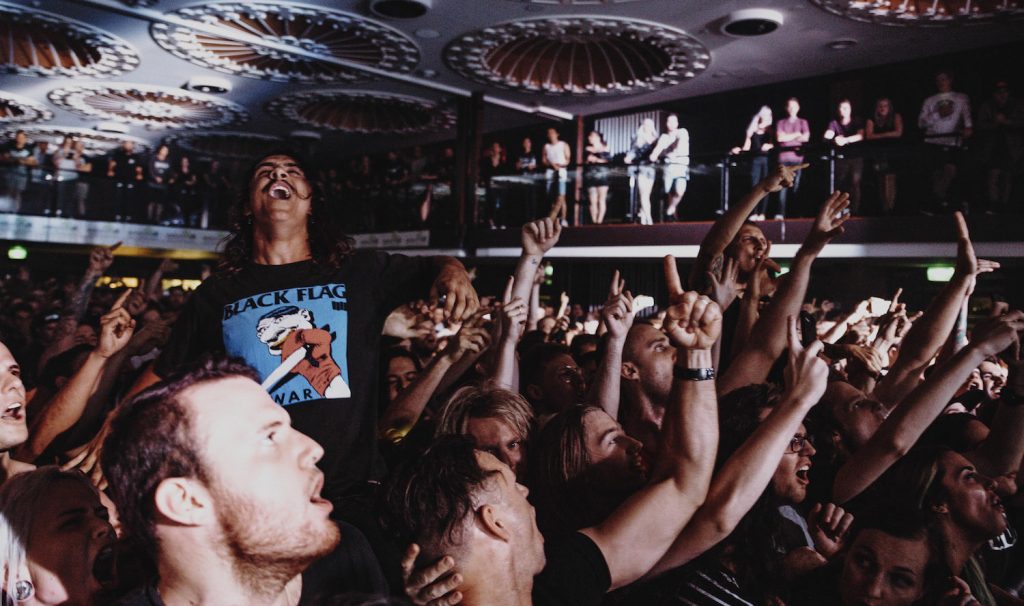 Keyboardist, Christopher Dudley, isn’t all that involved in a live setting, but that doesn’t stop him from throwing his head around at high velocity, looking like he is trying to wriggle himself out of a giant box of Pringle’s, with his head sticking out of the top, bouncing around aimlessly, almost breaking his neck by the amount of energy he’s trying to revive in the now tired crowd, managing to keep them up enough for their encore. Everyone Looks So Good From Here finishes a very tight and professional performance, and a monumental one for a lot of people in the crowd. 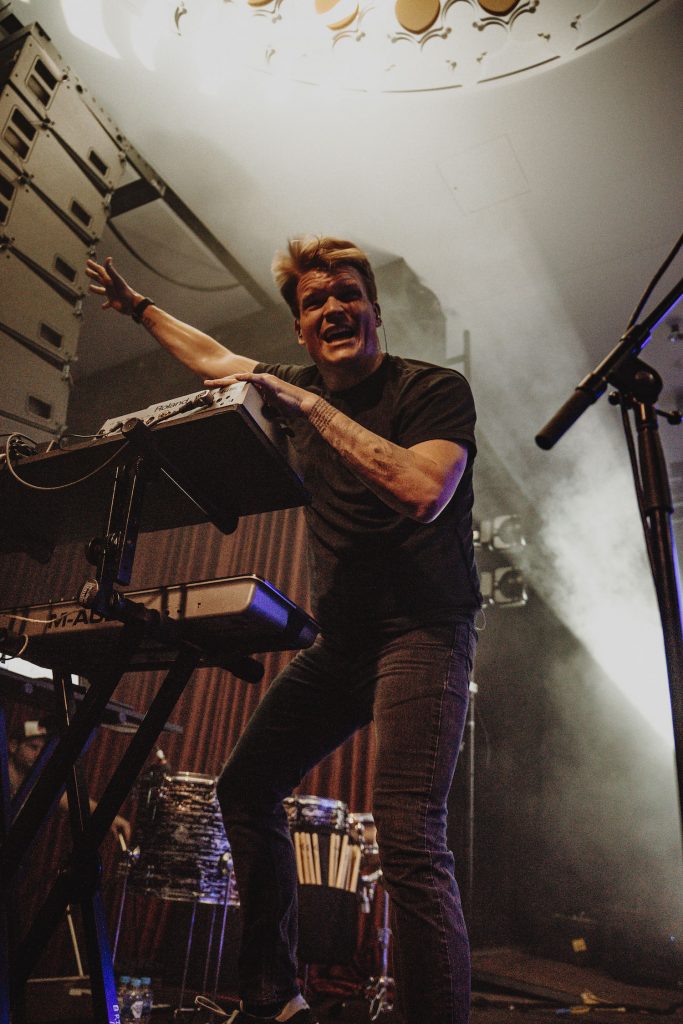 These anniversary shows should be expected now; our society is pretty much made and perpetuated on recycled content, especially in the name of nostalgia. But tonight Underoath proved that art, especially records, and what those records mean and represent, are timeless. There is a difference between art and content; content is the dumb shit you see on your Facebook stream, art is what survives after twelve years and still reminds you what it’s like to be seventeen again before the realities of life are going to shit all over your teenage dreams.

Underoath Rebirth Australian Tour continues through to next week.