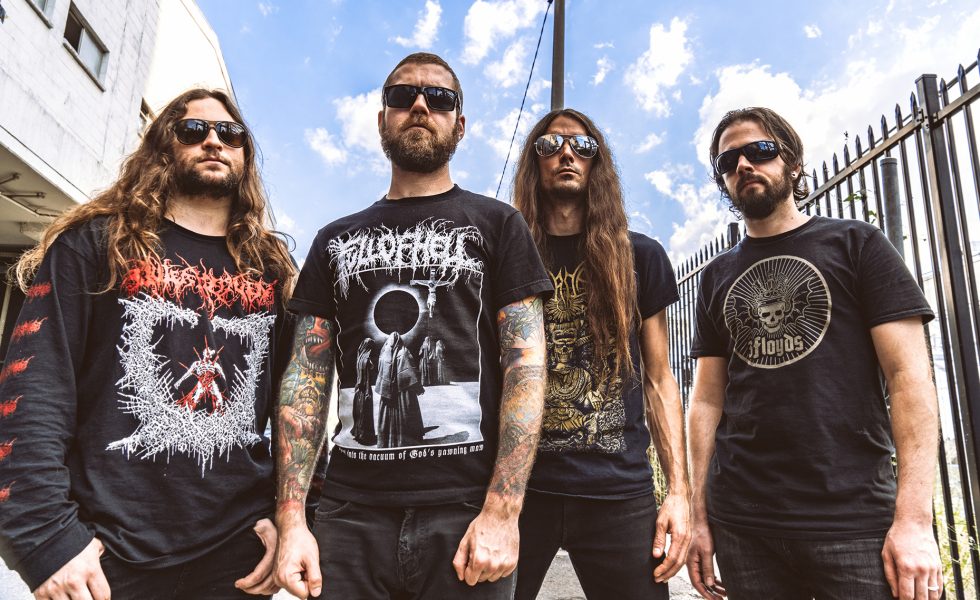 REVOCATION // Bigger Than The Human Experience

This month, American masters of thrashy tech-death metal Revocation have Australia in sight, and they’re set to launch a pulverising series of shows alongside fellow Americans, extreme metal enviro-warriors Cattle Decapitation. This is going to be a double-barrelled tour to remember!

“I can’t wait,” says Revocation’s guitarist and vocalist Dave Davidson. “We love playing Australia, it’s always a great time!” Aussie metal fans were treated to Revocation’s exhilarating live show in 2018, shortly before the release of their latest album The Outer Ones later that year. “That was a blast!” Davidson exclaims, and adds, “we’re really excited to play some new material off that record for you guys.”

The Outer Ones is a pretty insane album, but are there any particular songs that Davidson is looking forward to unleashing upon Australian fans for the first time? “I really enjoy playing all the songs live,” he says. “To be honest, every song has certain parts that translate really well to the live setting, offering elements of surprise for the viewer, the concert-goer experiencing this live. There were some cool curve balls that we weren’t sure how they were going to go over live that seemed to get a really great response, like we played A Starless Darkness, the closing track live on a few tours and seemed to get a great response for that.”

Speaking of cool curve balls, The Outer Ones does play with a few innovative elements, even for Revocation, as Davidson explains, “We always like to bring in different elements, it’s a very death-metal-centric album but for us, you know, its never going to be just one note, it’s always going to have surprising elements to our music, twists and turns to keep it engaging.”

The more tools you have in your arsenal the better, because you can tell that story in different ways, create different moods with your music that can link up with the lyrical content.
[ Dave Davidson ]

Twists and turns indeed! The themes of esoteric horror and Lovecraftian influences are pretty out there. On what led to the decision to embrace these ideas for The Outer Ones, Davidson says, “I’ve been a fan of Lovecraft’s work for a long time, I’d been reading a bunch of it over the years and influences were creeping in, but this was the first time we decided to make a general, kind of loose concept around it, I mean I think the ‘cosmic horror’ thing, and it’s not just Lovecraft … it’s part of a larger genre now, is fascinating, it’s something that’s bigger than the human experience. I will say that it’s not every song on the record that’s Lovecraft-inspired. I think it’s cool to have an overarching concept but allow yourself the freedom to break from the protocol and drop some other subject matter in there as well.”

Nothing is ever ‘down the line’ with Revocation. The music itself is quite an experience, bringing together many styles and influences, as Davidson says,

“Yeah I think, we’re all pretty diverse in the styles of music we listen to, and as a musician it’s going to trickle in somewhere, and the more diverse your taste in music, and the more things you work on and really study, it seeps into your writing. The more tools you have in your arsenal the better, because you can tell that story in different ways, create different moods with your music that can link up with the lyrical content. Or inform lyrical content; for me I always write lyrics at the very end of the process once all the music is written. So yeah, I was writing some pretty otherworldly shit in general on this record and maybe that helped steer me in a direction of where the lyrics needed to go.”

There’s sure some crazy technical material on The Outer Ones, including some impressive guitar solos. In the live setting, Davidson’s solos are like clockwork, but with flavour, as he explains, “I keep it pretty true to the recording, more like classical music, where the goal is to recreate it as close to how it was written as possible. That being said I love to improvise and I love genres that allow for that. I’ll improvise little things. It’s never exactly, exactly the same every night, in terms of some of the solos. I was sneaking in a couple of extended solos here and there on different parts, like on A Starless Darkness, the ending part goes into this heavy, grooving riff so there were nights where I was just going in and improvising over that, just because I was feeling the flow and just to make it special for that night.”

This time, Revocation is touring with fellow American heavy-hitting tech-masters Cattle Decapitation, which is going to be off the show. “Yeah we’ve toured with Cattle Decapitation a couple of times,” Davidson says, “so it’ll be great to get back on the road with those guys, they’re friends of ours, they just put out a great record [Death Atlas, 2019], so it’ll be cool to go out and support them while they’re supporting their newest release, so I think it’ll feel very fresh.”

Well, brace yourselves, Australian fans! It looks like we can expect not only a fierce live introduction to The Outer Ones, but also some Revocation classics. As Davidson says, “Since we haven’t played any of these songs live in Australia yet, we definitely want to play a bunch of stuff from the new material, but we’re going to play some older songs too.”