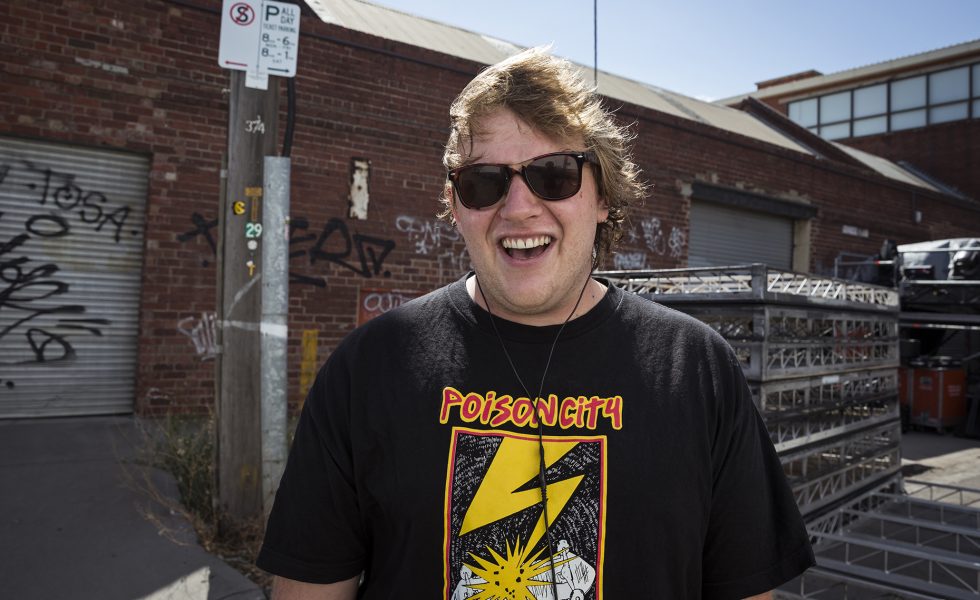 May 16, 2018 / WORDS Riley Fitzgerald / PHOTOS Kane Hibberd / Too many fans are missing the point, this is about mental health.

Hawthorn, Melbourne. A fan is groped, the perpetrator arrested. The Smith Street Band play on, oblivious. Just another show. The night winds to an end.

The following day frontman Wil Wagner takes to band’s Facebook. He delivers a long message expressing a jumble of thoughts. They come born from a crushing paradox.

Many of the Smith Street’s songs, not the least Death to The Lads, are statements. Messages condemning those oppressive masculine acts frequently bundled as ‘lad culture’, but despite the group’s considerable efforts, there’s been a build-up of incidents at the band’s shows. Typically, they come in the form of fights and predatory groping. They’re not uncommon.

It’s weighing on Wagner. “At the moment I feel like I never want to play a show again,” he confides. But more telling still are following words: “When I walk on stage, I should be focusing on getting the chords right and not fucking up the words but instead I squeeze my eyes shut because I’m too scared to look at the crowd in case I see something that makes me wanna throw my guitar down and rip someone’s head off, because if you come into my house and you make people uncomfortable, I wanna throw down my guitar and I wanna rip your fucking head off.”

This post was published on Sunday afternoon. It also announced that The Smith Street Band pulled out of a show in Castlemaine that same day. While fan response has been overwhelming supportive a number have voiced criticism. Many have decried the cancellation of a future show. Others have voiced views that Wagner’s response is narcissistic, a self-depreciation deflecting attention from those who truly suffer rather.

But maybe it’s less about that one contemptible fan. Rather it’s an artist sticking up for their own mental health. These words arrive as disturbing, heralding seeds of a fear and anxiety Wagner has often spoken about. They’re feelings which trigger struggles with his own mental health.

Wil was diagnosed with bipolar disorder and depression at age 12 or 13 (his accounts differ). It’s something he doesn’t hide from. In fact, it’s at the centre of his lyrics. It’s also littering his notoriously earnest stage patter. This openness is part of the honesty and magnetism that feeds The Smith Street Band.

Here’s a reality that’s sharp. Touring isn’t fun. It taxes mental health. Outside of performances themselves, most artists don’t enjoy shunting from stage to stage. Unfamiliar environments, long stretches of transit and the tedium of waiting are often medicated with vice and destructive behaviour.

But taxes on mental health aren’t just limited to the road. Success is, in itself, narcotic. There’s constant inward as well outward pressures. Artist are urged to make the most of being at ‘the top’ while pushing toward even loftier heights. Adding to that an artist’s future is unknowable, often bleak. What goes up must come down. Even if an artist ‘makes it’ it’s typically only for a few short years before the slide back into obscurity.

It’s little wonder music’s history is littered with spectacular and tragic ends. The recent and most topical is Tim Bergling. As Avicii he was no rock ‘n’ roller but found fortune as one of EDM’s biggest names.

In April he took his own life with a shard of glass. A rash moment fuelled by alcoholism, late nights, a high-pressure work environment and overbearing industry wranglers looking to wring another dollar from his stratospheric success.

Like Bergling, Wagner has struggled with mental wellbeing. In interviews and song, he’s documented the breakdown of a relationship which led to a ‘difficult period’ starting in 2015 and stretching into late 2016. But talking with The Brag in March 2017 he’s also suggested this decline was linked to pressures from touring.

Such long periods of miring anxiety and depression aren’t part of the rock fantasy. Outside big attention-grabbing moments and musical statements, it’s a bleak condition. A downer.

For those who suffer it success often ring empty. When the artist steps of that stage the buzz wears off within a few minutes and there’s once again there’s emptiness. A hole that’s never filled. It’s from here that the spectres of mental illness loom.

Mental illness is ongoing. In many cases, it can be treated but not cured. The back of house scenes of the entertainment industry exacerbate, rather than curb, problematic spirals of mental health.

But the world around these artists doesn’t stop. Music is in an extractive industry. One where the time-limited controlling factor an is artists’ ability to generate profit from recorded music and by putting boots on floors. Those attracted to artists as the sources of their own livelihoods are more often than not ready to ignore the troubling signs.

It’s all good and well to talk about fostering good mental health for Australian acts in interviews, studies, industry panels, during shows and through lyrics. But pulling out of a large financial commitment is another matter altogether. Money talks. When dollars and reputation are on the line many silently abandon their pro-artist tack.

Artists aren’t hip accessories for social identity, they’re people just as mundane and mixed up as their fans. Wagner has taken the hard road to facing up to the facts. There’s no shame here in taking pause for mental health. It’s time to remove the stigma.

Wagner and others have broken the ice when it comes to communicating the ups and downs of mental illness in a relatable way. Yet in many respects it’s an issue often raised but rarely if ever truly addressed. Music’s still taking casualties.

Mental illness is something which has defined The Smith Street Band’s narrative. There’s nary an interview where Wagner isn’t prompted to discuss it and shares quite readily his thoughts. But if it’s eroding this outfit, taking it apart at the seams or extinguishing its heart, drastic steps need to be taken. The kind which don’t always align with audience expectation.

Wanger’s words strike as troubled. Something beyond concern for reputation, idealism or his role as an entertainer. We often talk about crowds being a safe space for fans, but equally live shows can be environment harmful to an artist’s psyche. 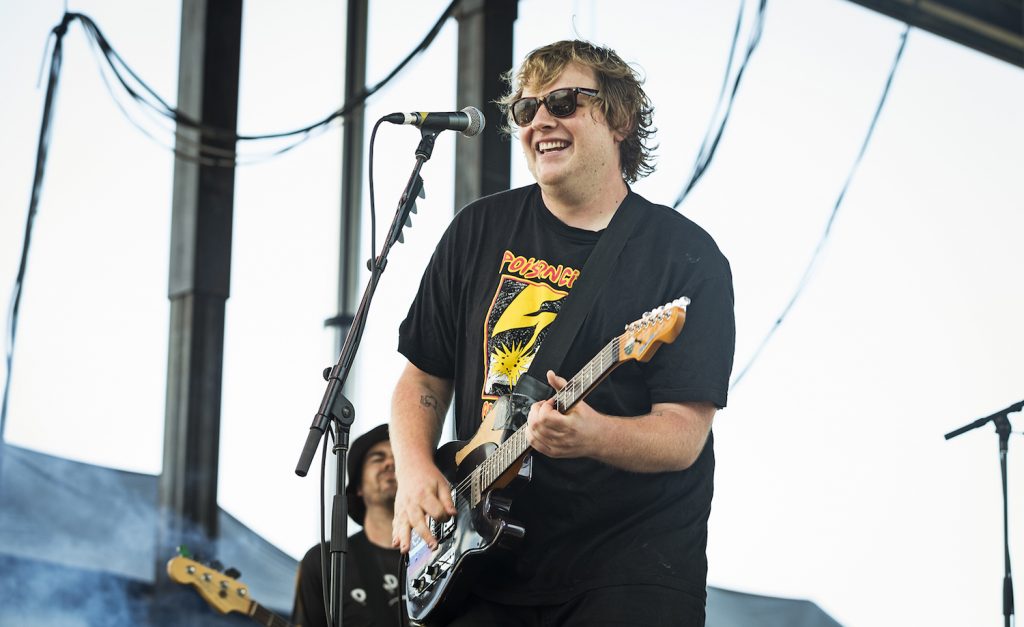 The Smith Street Band at Laneway Festival 2016 // By Kane Hibberd

Mental illness is ongoing. In many cases, it can be treated but not cured. The back of house scenes of the entertainment industry exacerbate, rather than curb, problematic spirals of mental health.

The industry is well aware. But death is often the best publicity. It moves product. Fallen artists are often held up as ‘seekers’. Figures of prodigious talented unmade by a faceless corporate machine in which they’ve inevitably become ensnared. They’ve spilled their guts for money but were given no other choice.

Their passing was simply an inevitable product of the crushing weight of immense creative drive and so their ends are celebrated as acts of rebellion, punk defiance and righteous self-actualisation. It’s a narrative that needs to change. Creating and performing is cathartic but it’s no cure.

As an outsider, it seems like there’s enough love and support for a figure like Wagner. He’s not intent on being a martyr, but others are not so lucky. Assistance for those with health issues shouldn’t be a labour of love or even a professional courtesy. Even where the black letters of the law overlook it, it’s a basic duty of care.

Artists have often levied the motto, “No sacrifice is too great for art.” But for fans, people who connect with artists need have to give a little too. While artist’s conditions have no doubt given their music it’s emotional charge, there are lines which need to be redrawn.

The Smith Street Band is a group defined by the bond between artist and fan, but when they elevate from a fifty person show at Melbourne’s Old Bar to a packed venue there’s something lost. Control. Fans come in impossible numbers and with them an undesirable culture. The community a band like this has enjoyed in its early years becomes stretched and so too does the music’s message. It’s a lot to take on.

Wagner’s used his talents to talk to young Australians. Men he addresses as brothers. Whether it’s a barbed remark shaming a shoey-guzzling fan at Splendour in the Grass, laying out humanistic view on politics or quelling violence in a crowd Wagner hasn’t shied away from confrontation.

The Smith Street Band are riding a high. They’re selling out venues across the country. But what makes this group, Wagner in particular, so compelling is a desire to lift their audience. Wil’s songwriting tells listeners that they’re not alone. But for one so buoyed by a belief that music can change the world, the idea of instigating harm–especially to children, vulnerable people invited to a concert hall at his insistence–must be devastating.

Wil’s dedication to admitting to his condition and removing its stigma has been applauded. But the fact remains that elements of his profession are hitting him where he’s weak. Music is a platform to talk about his depression and anxiety. But if the stage shows are hurting it’s okay hang up the guitar. For how long? As long as it takes.

It’s believed that one in three Australian women and one in five men experience anxiety during their lifetimes. One in eight men and one in five women will have depression. Musicians fare worse still. Australian musicians as three times to suffer from depression than those in other professions. Many lead shorter lifespans and more prone to suicide than workers from any other sector.

Those seeking support for mental health-related issues can contact Lifeline Australia on 13 11 14.

If you have experienced sexual assault you can contact National Sexual Assault Hotline via 1800RESPECT (1800 737 732).