KARNIVOOL // The Exception That Proves The Rule 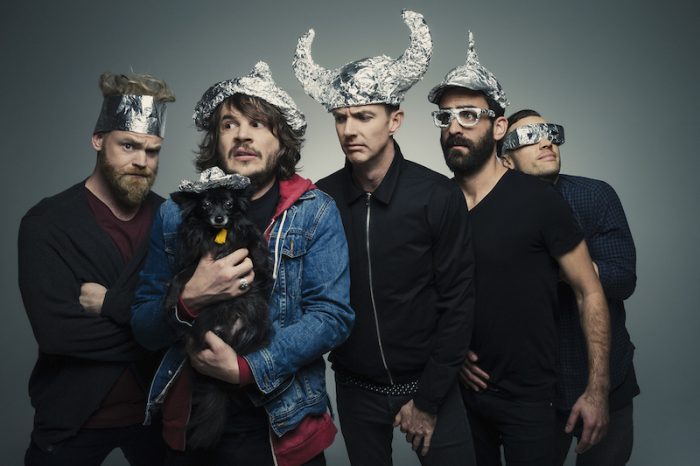 The next time you find yourself turning all fanboy or fangirl over a favourite musician, athlete or otherwise accomplished person, remember: that person you admire so much has almost certainly gone full fanboy/girl over someone they admire. For the members of Karnivool, that band is Deftones, a band they love and admire so much they’ve decided to go on their first non-headlining tour in over a decade. That’s love. Frontman Ian Kenny had a chat to Hysteria about Deftones, how isolation can be a good thing and just how far away that new Karnivool album is from becoming a reality.

Hysteria: You guys are between albums and are known for not really doing support tours, but I guess Deftones are a good enough excuse to break your own rules, right?

Kenny: That’s it! Through our career we’ve never really done supports, it’s not really something that is on our radar. It’s pretty basic though—we’re massive fans of Deftones and always have been. They’re in my top five bands of all time. So when we got the offer, it was a bit of a no-brainer. We’re going to go there, play and fanboy out.

Hysteria: You can definitely hear the Deftones influence in your stuff, particularly the Persona and Themata eras. There were a whole crop of bands in the late 90s and early 2000s that came up when you guys did where that Deftones influence was just so strong.

Kenny: Yeah it’s always sort of been there as we’ve been growing up as music fans. Adrenaline, Around The Fur and White Pony are my favourite records of theirs, and they’re the most likely Deftones records to have shaped anything that we’ve done.

Hysteria: I feel there’s a similarity between Deftones and you guys in that a lazy listener would categorise you both as nu metal, but there’s a lot more going on.

Kenny: I think nu metal as a descriptor for us came up because it was a new kind of groove heavy rock and people didn’t really know how to class us. We get thrown into all kind of boxes, but that’s the role of Karnivool I guess.

If anything, influences just made us realise what we liked, rather than what we wanted to sound like or be.
[ Ian Kenny ]

Kenny: I think now, the fact that we do things our way—I can’t say that it’s always been by choice, but it’s just the way we’re hardwired. There’s a core to the band where we just operate the way we do. It’s like it was designed ahead of us. It’s paid off in the respect that we have such a solid fanbase and have such an awareness of what this band does and it’s something that we hold very dear. We’re part of something so powerful on the fringe and we respect that.

Hysteria: It’s meant you can be sustainable, rather than chasing trends or following someone else’s vision for what they want you to be.

Kenny: In the very beginning, on the first record when we were shaping what this band might be, being from Perth we were so far removed from everything and left to our own devices about what we were going to do. That played a part in it too, in that we just got on with it.

Hysteria: Perth is wonderful like that. You look across genres and that isolation seems to be quite valuable for coming up with a sound and a vision rather than trying to fit into a scene.

Kenny: Definitely. That’s how it was for us. It was quite a fertile sort of freedom and space being an up and coming band in Perth and having a really good scene here and some important peers at the time. It was really, again, just being so removed from the industry and the rest of the country that allowed us to be the band we became. There weren’t so many distractions and to be honest, we didn’t think anyone was listening! People keep asking us what our influences were and I think it was probably the same stuff everyone else was listening to, but we didn’t play into the hand of it too heavily and just got on with it. If anything, influences just made us realise what we liked, rather than what we wanted to sound like or be. When you try to sum up what this band is and where it should fit, it’s not as clear cut.

Hysteria: When I think of the bands that I would consider to be influences for Karnivool, they’re all bands where the members have a really strong personal relationship with one another and have a really strong vision for their music and what they do—like Tool, like Deftones.

Kenny: Those are the bands who made it into our isolated worlds and they made a mark and, quite thankfully, I’m glad for it.

Hysteria: They’re not similar in sound to you guys, but I think there are similarities between Karnivool and Parkway Drive, in that both bands formed completely outside of established scenes and have managed to make unique music and grow these really passionate fanbases.

Kenny: Oh for sure. They’ve been left to their own devices and can work on their own craft, like us.

Hysteria: I know you’re just about to release the new Birds of Tokyo album and that Karnivool isn’t a band that moves quickly when it comes to putting out new stuff. That said, where are you at with the next album?

Kenny: The new Birds of Tokyo album will wipe me out for the next few months, but that’s fine. Karnivool’s writing the next album and we’re through the thick of it, so we’re looking at recording it next year. We’ll probably do a bunch of it in Perth—I don’t know who we’ll get to produce it. We’re doing pre-production with Forrester Savell who did Themata and Sound Awake with us, so it feels like it’s returning more to that approach at this point in time.