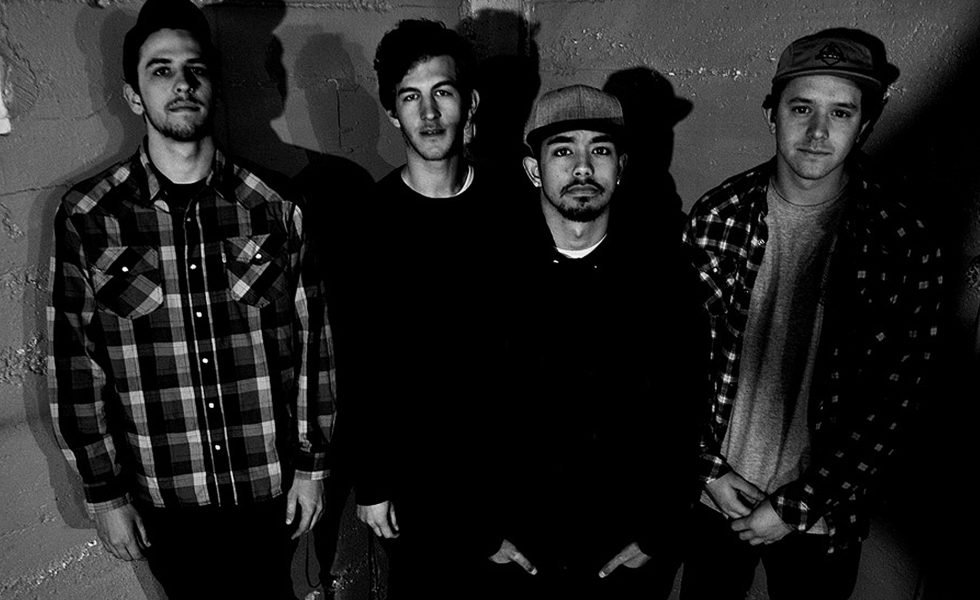 Oct 17, 2017 / WORDS Mike Hohnen, Hysteria Radio and Kahlia Sharpe / reaching through their speakers to smash their heads into their desks, and steal their wallets.

Kublai Khan are no strangers to our shores, having performed here in the past, and taking from our national history, in part, to write one of their latest singles B.C. This single is from their latest album Nomad. The release hit fans like a tonne of bricks, reaching through their speakers to smash their heads into their desks, and steal their wallets.

They’ve got a lot on their plate before hitting our stages, with shows locked in for Europe and North America, which was where we caught up with the band’s drummer, Issac, ahead of their next show.

ISAAC: We’re in Florida today, and apparently, there’s more hurricanes on the way so it’s a little gloomy, but, yeah everything is good.

HYSTERIA: I’m sorry to hear that. We’ve just woken up and it’s pretty much our first real day of summer right here in Australia. It’s like beautiful, and amazing, and warm, and it’s great. So I’m sorry.

Yeah, it’s just starting to get cold over here, so.

Well hey, I mean, that’s something that you guys don’t necessarily need to worry about, considering that you will be heading down under relatively soon. And I tell you what, it’s not gonna be cooling down any time soon for you guys. You must be pumped to be getting down.

Yeah, oh yeah. Last time we were over there, it was beautiful weather as well, ’cause it was about the same time of year. So I’m excited to be coming back at this time of the year.

That’s something interesting. It’s a tend I’m noticing with bands a lot. It’s becoming more and more common, when you guys bail on winter, and just go on a tour and call it work, and all you do is just avoid winter and hang out in summer. It seems like a tough gig.

Yeah. Things could be worse, I guess.

Sometimes, I think I may have picked the wrong side of the fence in this artist/journalist dynamic, buy hey, you gotta do what you gotta do.

None of us have experienced a real bad winter for the past few years, cause like you said, every year we just tour where it’s warm.

Well, it’s also a very cool time to chat with you as well, considering that Nomad is essentially still hot from the press. I mean, this thing dropped a matter of days ago. What a great album! You guys must be so stoked to have got that thing out/!

Thank you, first off. I’m real excited about it all. This came out, and so far, it’s being received pretty well from everybody we’ve talked to. I think it’s going well. It’s kind of a hard thing to gauge. But the shows … we’ve been playing some of the new songs on this tour, and the kids know the words and stuff, they’re having fun, so I think it’s doing pretty well.

Well, that’s the gauge of success, right? Screw sales, and screw charts, and all that kind of stuff. It’s when the amount of people in a room screaming the words back to you, that’s the success right?

It’d be interesting to know a little bit more about the album. I found out it’s quite a thoughtful, completely loaded release. Not that I was expecting anything else, but what struck me particularly was the themes behind the track B.C. If I’m recalling correctly, it was basically a track that address religion kind of diminishing and destroying indigenous cultures all over the world. What a huge topic, and so relevant right now, especially in Australia that’s something that is a really topical issue for us. So it’d be cool to know, what’s some of the other big themes that you guys approached with Nomad?

So that song, even part of that was us coming to Australia and talking a lot with everybody we met over there about Australia’s history, and I think that helped influence that song a little bit. [ISAAC]

So that song, even part of that was us coming to Australia and talking a lot with everybody we met over there about Australia’s history, and I think that helped influence that song a little bit

You’re on tour, you’re in tour mode, you’re not thinking about the themes in your particular album. You know, you’re thinking about getting venue to venue, I understand.

So this was, correct me if I’m wrong, was this your first release through Rise Records?

Yes. We had recorded, we were with Artery Recordings for the last few years, and our contract ended with them in December, and we recorded the album on our own. And right before we released it, we had been talking to them for awhile, and we worked out a deal, and put the album out with them. This is our first of I guess three albums with them, and we’re really, really excited about it.

Hell yeah. I know that more often than not the whole label thing and the administration side of stuff doesn’t really mean anything, but with Rise, it’s such a culture. It’s talis-matic almost. It’s a really important presence in the community. What’s it like being part of that family?

It’s kind of strange because they’ve been around for longer than I’ve been alive, they’ve been putting out music. And we’ve grown up with Rise bands, and the idea of a Rise band, and I feel like we don’t really fit that roster as well as some people would think. We’re a less polished band than a lot of their bands.

But it doesn’t seem to matter. They’re really nice, they’re really excited to be working with us, and we had a handful of people joking that they were going to make us change our sound, you know, wear matching stage outfits, stuff like that. That doesn’t actually happen, so the band’s that do that, they want to do that. The label’s just helped them with whatever they wanna do, and they’re being really helpful with what we want to do. That’s all you can ask for out of a label, is for them to help you push your own ideas, so we couldn’t be happier.

Sure. Awesome. Well that story you said, about the labels trying to change bands, I don’t know if you guys saw that Sum 41 video clip where they have that chat with their label Fat Cat Guy, and he tells them they’re no longer called Sum 41, they’ve gotta be called The Sum, cause ‘The’ names are in at the moment. But I think you’re right, that image kind of died off in the 90s, and it seems like, especially at Rise, it’s just people that really care about the culture.

So tell me, now you’ve had a few shows, you’ve taken the plunge with taking this album to the people, how does the thing go live? You’ve mentioned that the people are screaming all the words back, but as a performer, as one of the guys that wrote it, what’s it like to unleash this thing on stage?

It’s fun and relieving, because I finally get to play some new songs. You know you put out an album and you spend the next year or two, or forever playing some of those songs, so every chance that we get to add something new to the mix is a lot of fun for us as the actual performers.

So we’ve been having fun playing some new stuff on stage.

Well screw it man. I give you full permission to just go from start to finish Nomad on your Australian tour if it’s that much fun for you. Go for it.

Of course, I do not have the authority to make that call, but hey, I’ve done it, it’s on the record now. It’s gotta happen. Also, so you mentioned you’re in Florida now. Where’s the next stop after your US run?

We’ve got a few in just another week or so on this tour in the US, and then maybe a couple weeks off we’re heading off to Europe for the Never Say Die tour. Then after that, we’re coming to Australia.

Straight to Australia. Oh man, so you better make the most of these next two weeks off, dude.

Yep. Yep. That’s the plan. We’re gonna go home and do absolutely nothing until we head over to Europe.

You can catch Kublai Khan when they’re in town supporting the Acacia Strain.