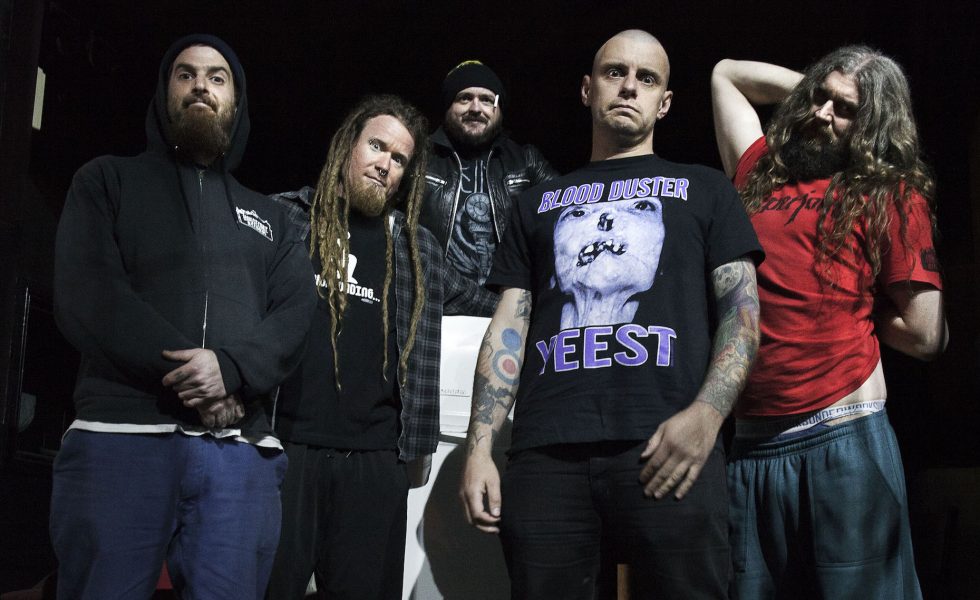 After the world-conquering success of their Dead Set record, Melbourne grind larrikins King Parrot needed to figure out what was going to come next. Vocalist Matt ‘Youngy’ Young said to figure it out, the quintet looked inwards. What they saw was ugly, and Ugly Produce came to be.

King Parrot of 2015 had the world at their feet—they’d secured a superfan in metal legend Phil Anselmo and it seemed like wherever they were going around the world, new and exciting doors were being flung open for them. Talking to Youngy though, you would think the wild ride that King Parrot have been on for the last few years was a test drive for a second-hand Honda Accord. The vocalist has about as little time for indulging the perks of fame as he does for bullshit.

Talking to Youngy, it’s apparent that attitude helped shaped Ugly Produce into the monster that it is. “When we recorded Dead Set with Phil Anselmo at the studio at his house it was a surreal experience for us. There we were recording with a heavy metal legend—and while everyone there made us feel completely at home, it was kind of one of those time and place things where we’d just done a US tour with Down and then we went straight to Phil’s place. It moved along so quickly. This time we probably had more a year and a half to work with the material, and let it shape itself in a pretty organic kind of way,” Youngy says.

It still has that unhinged King Parrot sound—like the wheels could fall off at any second. And it’s gotta be like that for this band
[ Matt Young ]

‘We had a lot more time to write as opposed to the previous one where we were only together as a band with Toddy for six months playing drums… in hindsight we probably rushed that one a bit, but this one we’ve allowed the songs to wash over us, and we’ve been able to road test a couple of them. But even though we’ve taken our time with the album, it still has that unhinged King Parrot sound—like the wheels could fall off at any second. And it’s gotta be like that for this band.”
When the band was set on the material that would form Ugly Produce, Youngy said the band realised they had an incredible opportunity to make something that truly represented what King Parrot were all about.
To properly realise this, they decided that heading overseas to make another record wouldn’t be the right move. Instead they enlisted the services of Blood Duster shit stirrer Jason Fuller and his Goatsound studio in Melbourne’s northern suburbs.

“Jason really understands the band and the Australian grind sound, obviously being a member of Blood Duster—a band that’s been good friends of ours and an influence on the King Parrot sound. So he really knows where we’re coming from,” Youngy says. Asked what it was like working with Fuller again, Youngy just laughs. “I’ve been friends with Jason for years… I used to buy drugs off him when I was a teenager… he’s a great guy and if I’m doing a vocal take he’ll tell me straight ‘yeah, that sucked, do it again’. There’s no preciousness about it or ego in there at all. No fucking about, and it just cuts all the crap from the finished product.”
That approach helped King Parrot distill their sound closer towards its molten core on Ugly Produce, but Youngy said the album is also defined by band’s wealth of recent experiences that made them more comfortable with the idea of sonic experimentation. “The overall chemistry that the band has developed and we wanted to show that on this album. We’ve done about 100, 150 shows every year for the last three or four years and I think that’s starting to show. So we’re adding more layers to the sound on this record, whether that’s a little bit of feedback, or a couple of guitar licks here and there. We were looking to add a bit of colour and texture to the songs. When you’re playing a two-minute grind song, you probably don’t need some amazing guitar solo, but we can still add a few interesting things in there to keep everyone, the band included, on their toes. “From day one we’ve always tried to write the most intense music that we can possibly come up with. And I’d like to think over the space of these three albums we’ve just improved it every time, and come up with something nastier, that also is a little different from what we’ve done before.”
According to Youngy, the only real prerequisite for their new record, just as with everything King Parrot, was that it had to be ugly.
“Yeah,” Youngy laughs. “It’s gotta be balls to the wall, flat out, the whole time.”
Ugly Produce is out now through EVP Recordings.
King Parrot’s Ugly Produce Australian Tour with Disentomb & Pagan starts this December.
Tickets available here.
Wed December 13, Badlands, Perth WA
Thu December 14, Uni Bar, Adelaide SA
Fri December 15, 170 Russell, Melbourne VIC
Sat December 16, The Factory, Sydney NSW
Sun December 17, The Triffid, Brisbane QLD