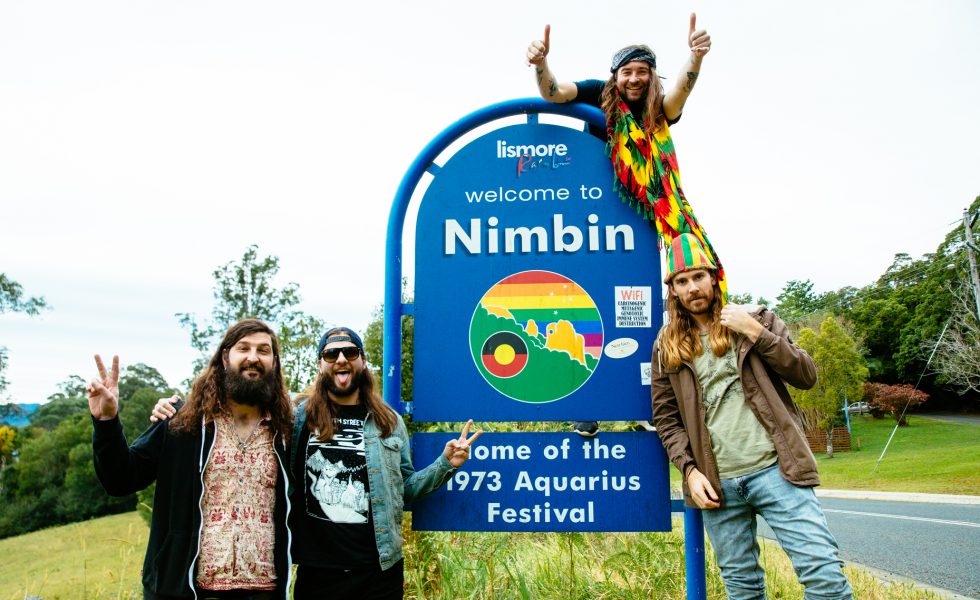 FLASHBACK // The Bennies Stumble Upon Nirvana

Oct 16, 2018 / WORDS Tom Hersey, Contributing Editor / PHOTOS Matt Warrell / "It was like if Disney was allowed to make a movie about smoking weed."

1980s power balladeer and one-time punk Belinda Carlisle said it best; heaven is a place on earth. On their most recent tour of Australia, bleary-eyed Melbourne party punk outfit The Bennies discovered their own private slice of Valhalla when they rolled through the sleepy, weed-loving town of Nimbin on New South Wales’ north coast. With the benefit of a couple nights’ sleep and a chance to get their minds back in order, vocalist Anty Horgan, guitarist Jules Rozenbergs, drummer David Beaumont, and bassist Craig Selak talk about discovering a little piece of heaven. And, ooh baby, do they know what that’s worth.

“Nimbin was one of the best days of my life,” Craig says as soon as the topic of the town comes up. It’s three days after their show in the town and you can tell how much of an impression it’s made on the four dudes. We’re sitting backstage at their sold-the-fuck-out show at Brisbane venue The Triffid and there’s a bucket for of ice-cold beers in easy reach. You’d think there would be no time like the present. And yes, the band is pretty stoked on what’s going on right now, but still, Craig’s eyes light up when the chance to discuss Nimbin presents itself.

“I don’t think I’ve laughed as much as I did that day,” Anty says. “It was like if Disney was allowed to make a movie about smoking weed.” 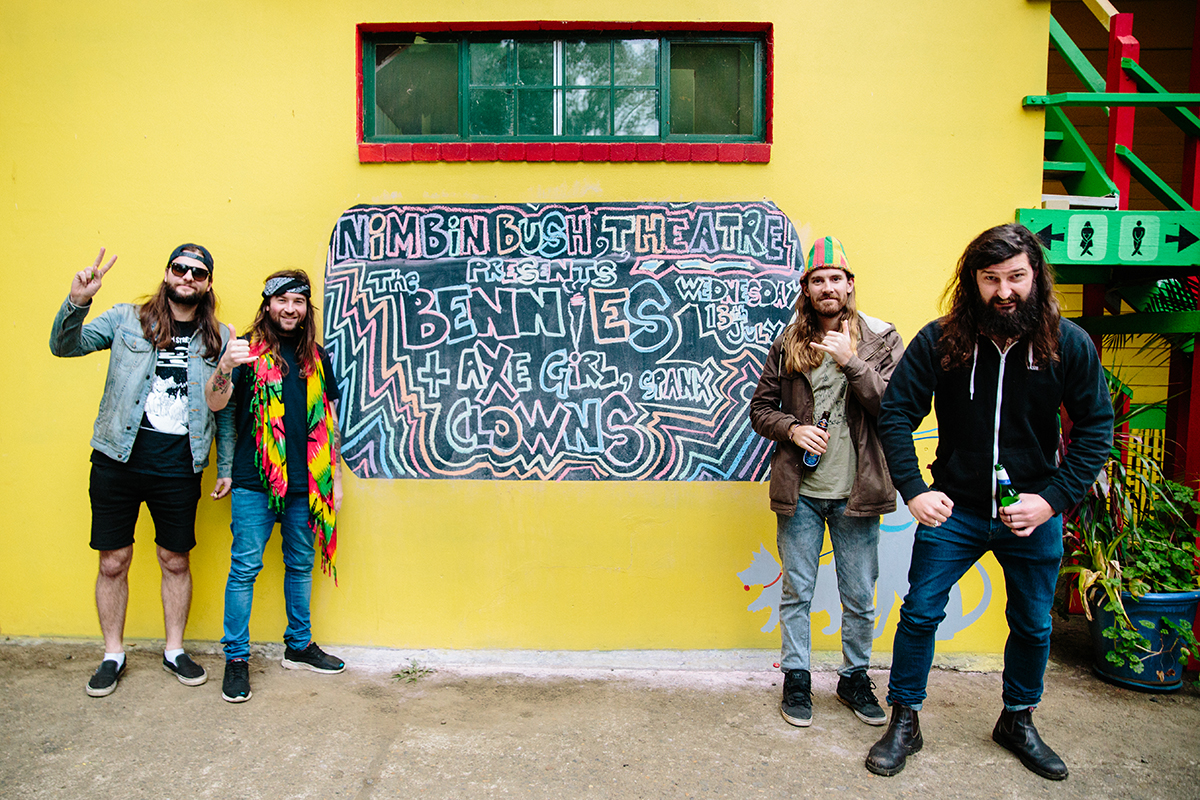 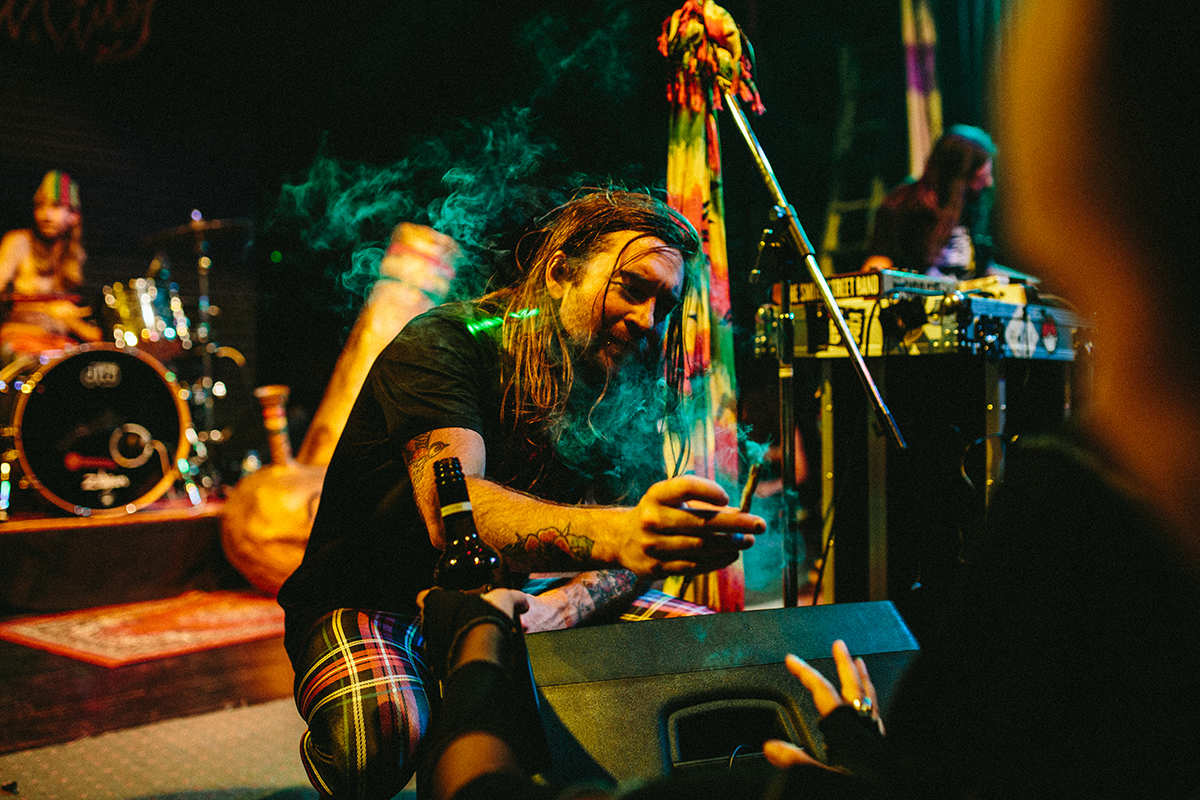 When the band of noted bong lords announced that their Wisdom Machine Regional Australia tour would feature a date at Nimbin’s Bush Theatre, people chuckled to themselves. ‘Oh of course these dudes would play Nimbin’, they said. And the dudes admit that they didn’t really know what to expect from a show in Nimbin. Because as much as it’s seen as a weedian’s Nazareth, it’s also featured with increasingly frequency in the press as a hotspot for much shittier drugs.

“It was like the town and the people broke stereotypes, but lived up to them as well,” Jules says. “This stereotype that there was this darkness associated with Nimbin was shattered, and then this one where people are really chill, really welcoming, and there’s this massive weed culture.

“It’s not a standard town,” David continues. “We heard there was this gross negative side to the town but we only saw this rad weed community. So it was a non-stop party.” 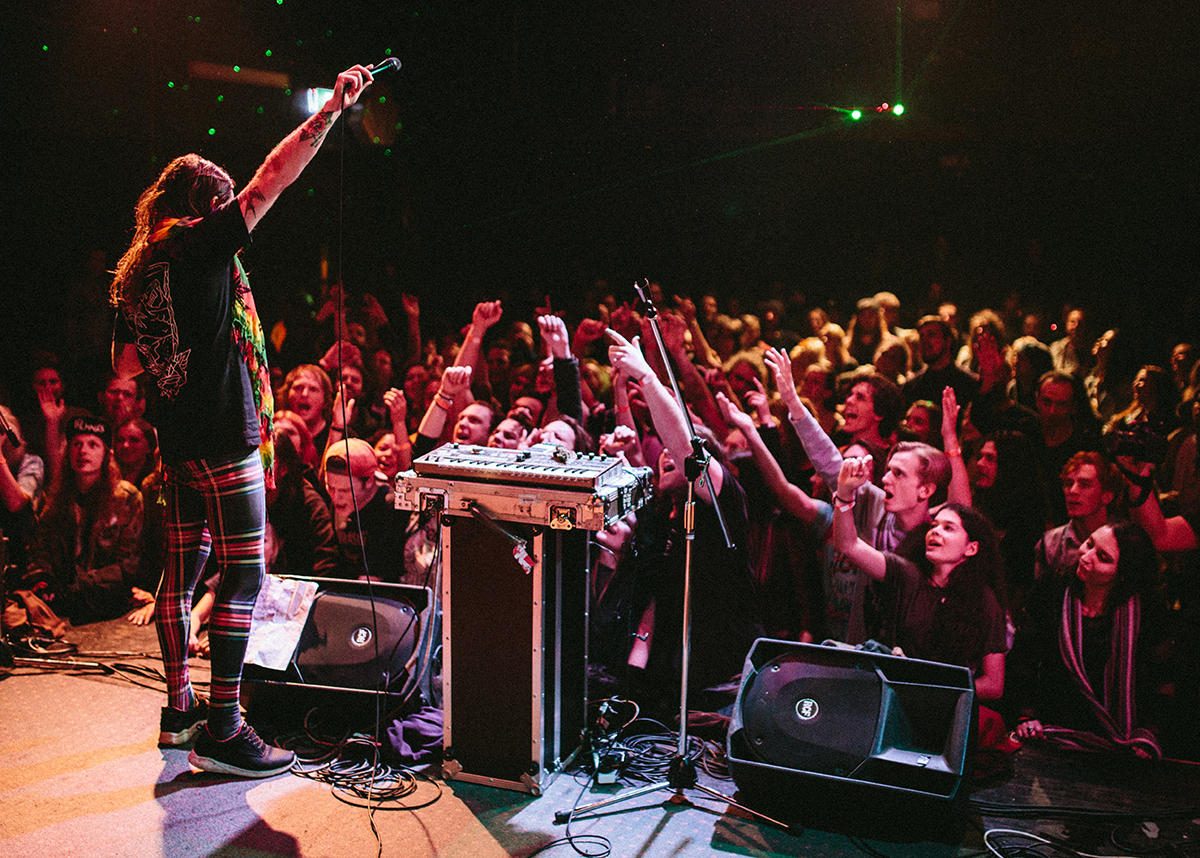 In fact, as soon as the band rolled into town and got a feel for the place, they knew it was going to be a rad place for the Bennies to proudly fly their freak flag.

After spending a day getting to know the town, and working on ways to forget it, the dudes got down to the business of preparing for the show. Which, in obvious Nimbin fashion, was connected to a bong shop.

“Yeah,” Anty laughs. “The venue was connected to a bong shop, and two of the guys that worked there were talking to me about it and it was totally there idea. They came up to me and asked ‘can you guys smoke a bong onstage?’ I said I wasn’t sure, because we’d never really done it before, joints on stage all the time that’s fine, but bongs might be a bit weird or whatever. Then they said ‘everybody smokes spliffs on stage, if you guys smoke bongs it would be cooler’ … So I had to be like, ‘yeah, fair play’ …

“Totally peer-pressured into it,” David says before Anty continues. “I think he wanted to use it as like a way to promote the shop and he completely did that … But it was a funny story, because one of the guys was stressing really hard over what song he should bring it out for and we told him it didn’t matter. But then we wrote a set list and gave it to him and told him to bring them out at a certain time. And he came out at the wrong time. But it didn’t matter.”

“Sometimes people will give you a tray of shots or whatever,” Craig says” but they do things a bit differently in Nimbin. They brought us out a tray of bongs so we gave Nimbin the four-bong salute as a sign of appreciation.”

Craig offers, “And people were throwing nugs at us …” and Anty continues, “At the end of the set I had about five nuggets of weed that people had just hurled at me.”

“ I felt like the dark knight from Monty Python [and the Holy Grail],” Craig says. “I was still carrying on, limping, saying ‘it’s just a flesh wound’, but I was absolutely destroyed.”

“We are so vincible, Jules reckons. “That’s the thing. We’re not like heroic smokers, we just throw so much fucking gusto at it and cop the consequences. That’s all you can do.” 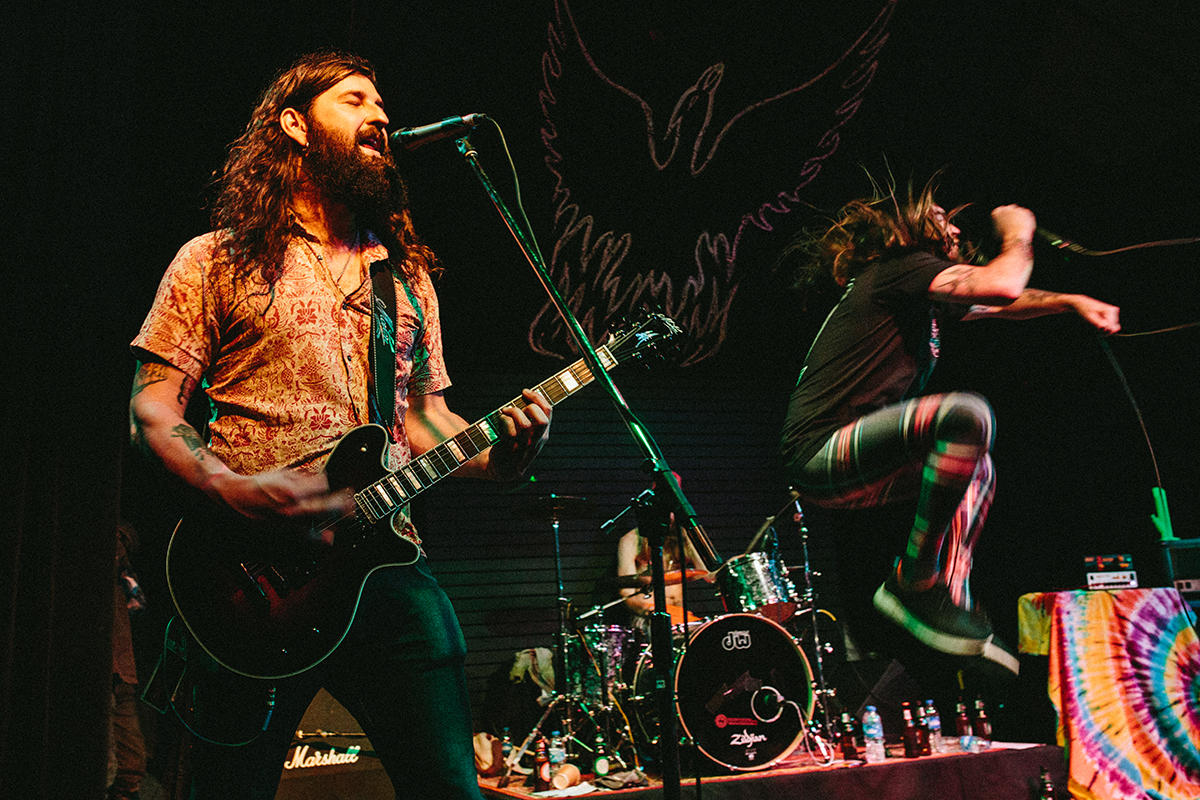 As for how they pulled up, Craig points to all the frequent coughing of all four members as a side effect of their time in Nimbin. When asked for his best moment in the town, Anty struggles to remember anything concrete before Jules says: “It’s not like you’re drinking tequila all night. You have a couple of coffees and brush it off. That’s the beauty of weed, you can smoke fuckloads and you’re going to be foggy the next day, but you’re not going to be crucified and not going to be able to get out of bed.”

“We got sent an email by the guy who organises the venue to say thankyou or whatever,” Anty offers. “This is a little passage he wrote ‘A ten year old crowd surfer had the night of his life, a committed nudist got to show his wares, plenty of smoke was inhaled, the crowd behaved as if there were at a wedding and went home at an appropriate time to allow the support staff, crews and musicians the time to relax. A night to be remembered on the 2016 Nimbin social calendar for those who had the smarts to go’.

Craig agrees totally: “There were over 300 people at the show. And the show was all ages, and pretty much all ages were represented there. And everyone was having such a great time. No one was getting in anybody’s face, they were all really respectful of each other and the venue. The show ran like an absolute dream. And we felt like we were part of the town, we were really welcomed. Because I think people really respected that someone popped in to play a show there, but I can’t believe it doesn’t happen a lot. I think it’s now going to be Melbourne, Sydney, Nimbin, Brisbane when we’re heading up the coast. It seems like a no-brainer.” 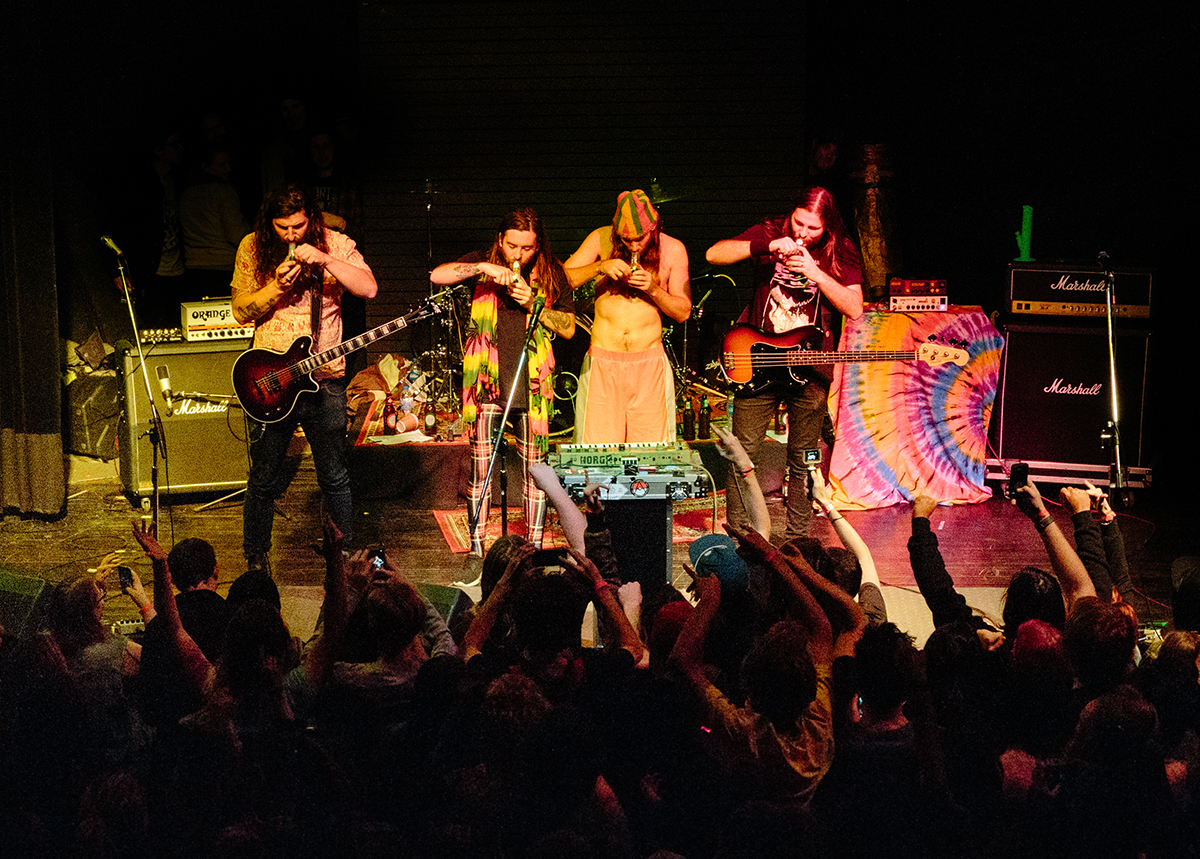 As the dudes spent the day walking through the town, they encountered a shitload of quirky stuff. Jules reckons it was like stepping into a “marijuana-themed Willy Wonka world”, but the thing that makes them laugh is the most is Anty’s story about an overheard conversation.

“We were in a shop and this guy walks in and says how’s it going to the lady behind the counter, like they obviously knew each other and she asked him if he was going to get a coffee and he said yes so she asked if she could get her one. And he says ‘yeah, but you’ll need to give us cash though because the other day I went up to Lismore and spent all my cash.’ She was like ‘oh yeah, what were you doing up in Lismore?’ and he was like ‘buying cat food’. She said ‘no worries’ and gave him the cash and off he went … so many questions come to mind when I hear that. How much cat food is he getting? Why is he spending his last money on cat food? And why is he driving like 40 minutes away to get cat food? But then later in the night I was chatting to some other dudes and I told them that story while I was laughing. I got to the punch line part, and they were like ‘oh true, I get my cat food from Lismore as well’.”

They don’t get it either.//

Party Machine, The Bennies will headline Halloween Hysteria, 27 October, Brisbane, get your tickets! 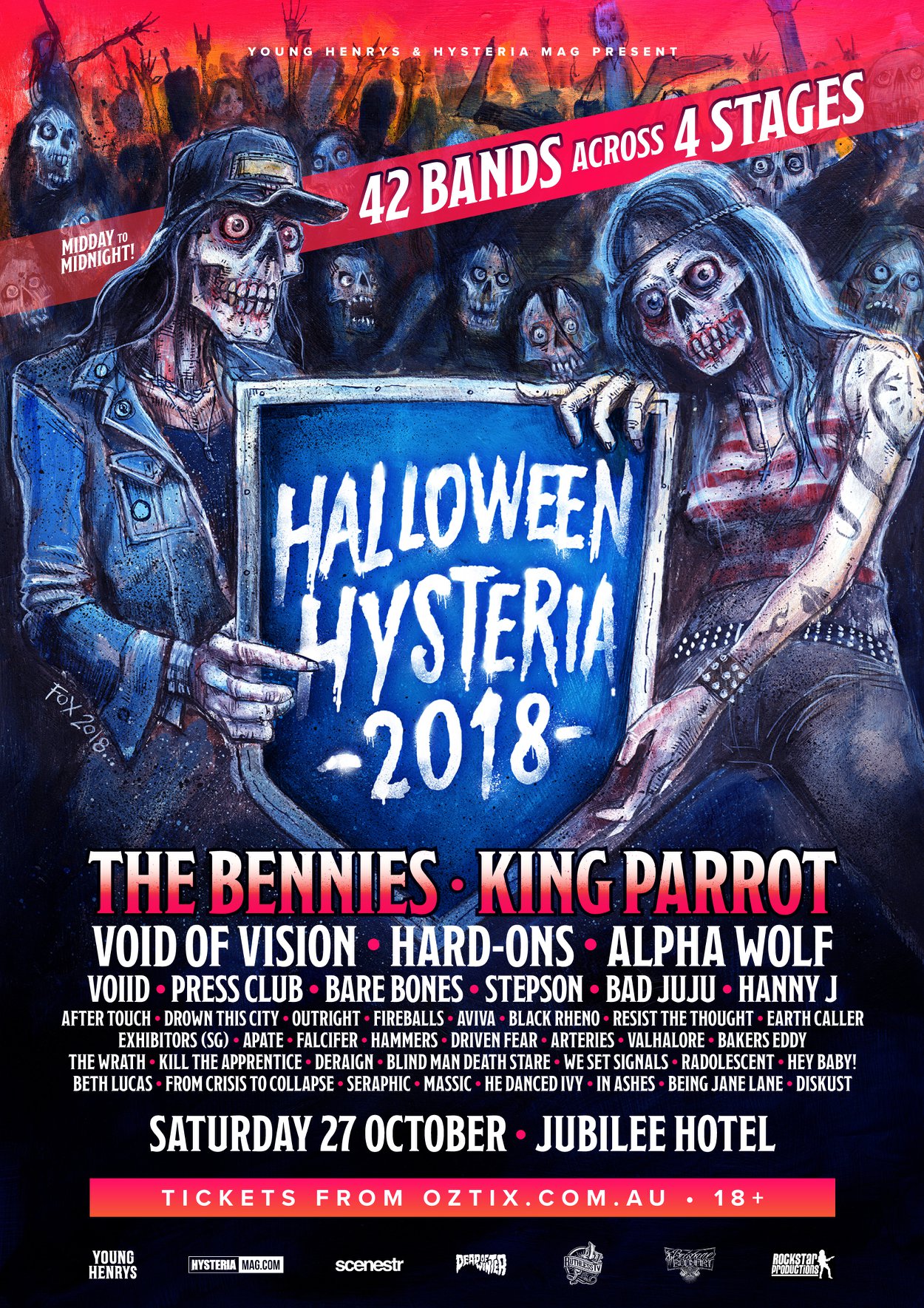