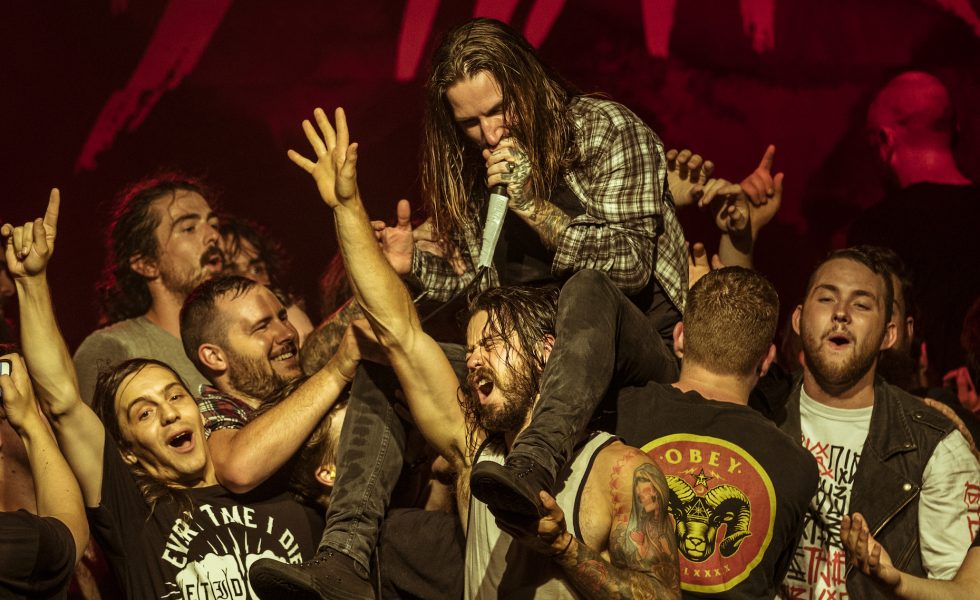 EVERY TIME I DIE // A Destructive Rebirth!

For two decades hardcore punk outfit Every Time I Die have been tearing up stages around the world, bringing chaos and tension release to the ears of their many international devotees.

Escaping the cold winter of their hometown city of Buffalo, New York, the band’s first locked in dates for the New Year will be right in our backyard at the annual UNIFY Gathering Festival in Victoria. The five piece group are no strangers to visiting Australia and relish any opportunity they can get to come to our shores to play headline club shows or perform outdoors in hot and sweaty festival environments. Hysteria spoke to Every Time I Die vocalist Keith Buckley about their memories of touring Oz, what has changed the most for the band over the span of their 20-year career and if there is any new music in the pipeline.

Hysteria: Having toured Australia a few times, what are your memories of playing the country and are you all ready for another long journey to our shores?

Every Time I Die: We’ve played Australia so many times, the only thing we haven’t actually done while we were there is to head out after one show. We’ll take any opportunity to go to Australia, doesn’t matter how much we have to sacrifice to get there. I can think of a lot worse things to do than a 16-hour flight with wine and cool movies starring the Rock. As far as things that stick out about actually being there, I remember playing in Sydney on the hottest day of your recorded history; we were outside playing in high noon, the sun was directly above us and we decided to wear leather jackets no matter what. It felt like we were inside an oven the entire day but once we finished our set I figured we could pretty much do anything unless we actually died on stage and it was all some post-life illusion matrix!

You guys have been playing music since the late 90’s, what has changed the most after all these years playing together as a five-piece band?

Probably the years themselves, when we started it was the late 90’s and now it’s the late teens. I don’t know how that works but it’s almost like time is a flat circle.

The band has been consistently releasing new music every couple of years but your last album Low Teens came out already two years ago, when can fans expect a new Every Time I Die album?

I don’t think anybody should expect a new album from anybody; we’ll do it when it feels good. Until then we’ll just keep playing shows, I think it’s a consensus in the band that Low Teens has a tone of life in it yet. I can’t imagine getting a dog and after two years saying “sorry buddy you’re too old I’m going to have to put you to sleep” there’s so much life in it yet we’re going to let it breathe and keep playing it until people don’t want to hear it anymore, but it shows no signs of slowing down just yet.

We’ll take any opportunity to go to Australia, doesn’t matter how much we have to sacrifice to get there. I can think of a lot worse things to do than a 16-hour flight with wine and cool movies starring the Rock.
[ Keith Buckley ]

As far as your songwriting is concerned, what is inspiring the band to write new music?

Nothing right now, we are not writing new music just yet, we do it because we feel it. We’ve been doing this for 20 years so we understand when it’s an itch that needs to be scratched but like I said before Low Teens still has a lot of gas in the tank so we are not going to rush it. Normally when we do write it’s because we are an older band and we have a lot to prove so we come out swinging and try to make it better and heavier than the last one.

I would definitely not write so many lyrics, I think that’s obsolete first and foremost. If I were to start the band again I would stop trying to impress people with words because it’s fucking exhausting and doesn’t really do any good for anybody.

Going forward, do you have other goals that you would like to achieve as a band?

We just did a Christmas show in our city of Buffalo and the city named a day after us so 15th December is officially Every Time I Die day! I really never thought that was possible so I’m going to have to set a new standard, maybe we can get it as a national holiday and everyone can get off from work on 15th December in the future so no one has to go to work on that day!

Finally for someone whose never seen Every Time I Die live or isn’t familiar with the music, what can they expect?

If you haven’t seen us live and have never heard of us, I guess I would expect you to feel like you’ve found something you’ve been looking for your whole life.

Catch Every Time I Die on their only Australian show at UNIFY Gathering this weekend, limited tickets available here.