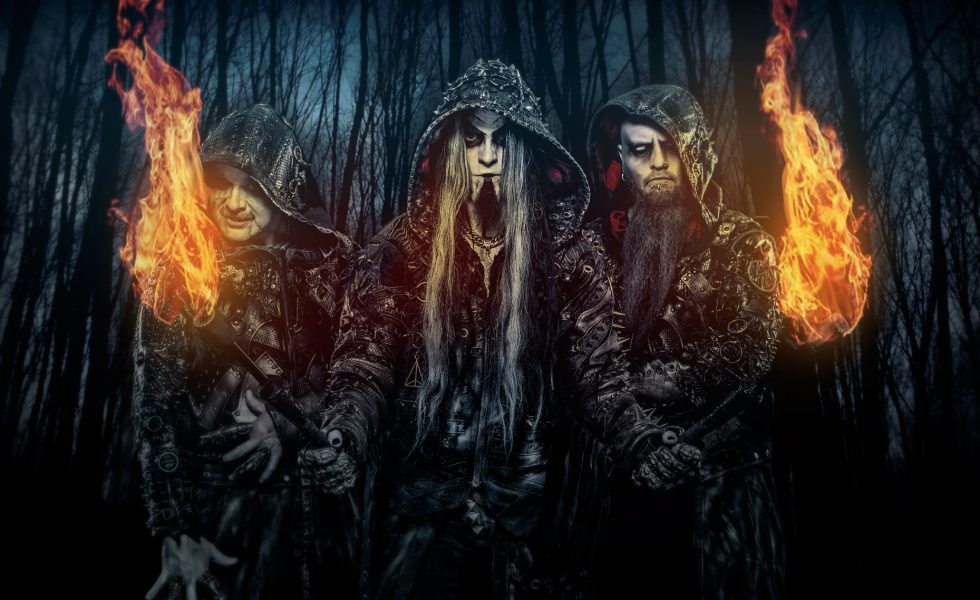 After a silent seven years, those soldiers of darkness Dimmu Borgir are resurrected to fill the hush with a raven black sound and an orchestral opulence with their new album Eonian.

Axe wizard Silenoz has said of Eonian, “Time, when not approaching it from the construct we’re used to, can’t be defined and thus it is illusory. There is only an eternal now.” Stepping between worlds both seen and unseen, Silenoz said that the “perception of time ceases to exist.” This year is the 25th anniversary of Dimmu Borgir, Eonian is their tenth studio album and comes seven years after their last release—for a group that has said their new album defies any construct of time, there seem to be an awful lot of numbers to be attributed to them. Surprised, Silenoz contemplates the observation. “Yeah I guess you could say that. I haven’t paid too much attention to that but when you say it, I agree.

“The idea for us as human beings about time, that’s relative because if you go really deep under the surface on a metaphysical level, time doesn’t exist. It’s something that’s constructed for us to understand when it’s day and night, to keep time. That’s just one layer of the album and once we get away from that, I feel the most important thing in this, especially in a lyrically sense, that they are no absolute conclusions.

I’m a sucker for science but I’m also a sucker for things science can’t explain. Those two opposites in a way, they melt together.
[ Silenoz ]

Despite the philosophical tendencies of the album, Dimmu Borgir retain logic, the Yin and Yang of existence. Dimmu Borgir have been adamant that Eonian should be left open to interpretation, and with those numbers, those human constructs, the album is both a rebirth and a logical continuation. Sonically they are pushing and pulling against two different constructs; the philosophical and logical. “Yes,” Silenoz says firmly, “We have mentioned oil and water and that doesn’t mix really, but we’re so stubborn we do everything we can to try and make it work together.

On this album, we’ve been much better at leaving the ego at the door.
[ Silenoz ]

“On this album, we’ve been much better at leaving the ego at the door. We have to step out of that bubble and look at both things from an objective point of view which makes this extremely challenging. You’re so immersed in your own bubble it’s harder to see other points of view. I think with our experience and getting older, especially knowing what we don’t want, it helps us be more spontaneous and more open minded and maybe not so analytical like we were in the past.”

Perhaps without thought, Dimmu Borgir have chained themselves down to time, as each of their ten albums are representative of a particular moment of their existence. “You’re onto something,” Silenoz cries excitedly. “After 25 years it would be weird and sad if we didn’t sound different to what we did in the past. Every album is a description of where we are at a point in “time”, but spending more time on the new album, not having a deadline, which could be a good and bad thing, it was a good thing this time because we could go back to older ideas and refine it and polish it.”

Dimmu Borgir are a band who work against certain constraints and think largely outside the box. To think on the fluidity and freedom of creative existence they’ve enjoyed in the last quarter century strikes further pensive philosophies in Silenoz. “I look upon it like this; we’re living and experiencing a very special time. In such a short amount of time which we have existed, a lot of things around [us] in the world have changed at a rapid pace. For us to still be a part of this for so many years, I know for a fact that one of the reason we’re still here is that we have made sacrifices. That’s what makes me most proud of our achievements.

“Ups and downs, you learn from that, and that’s a good challenge too because it creates a very creative dynamic. For me talent is 3%, the rest is sacrifice and blood, sweat and tears, and going through the foxholes and the trenches and still stand rigid when the storm is coming in towards you.”