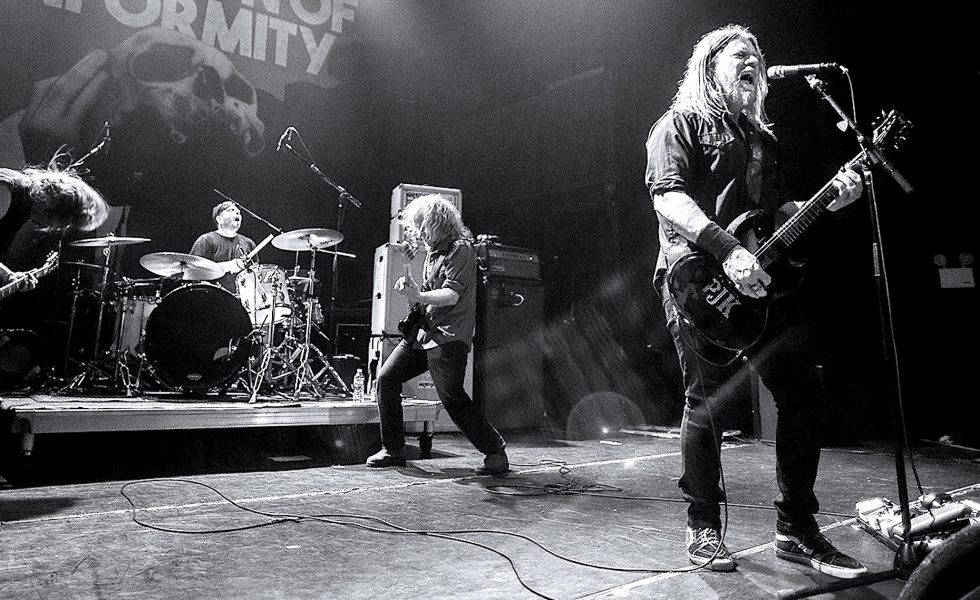 CORROSION OF CONFORMITY // Wearing The Crown With Pepper Keenan

Like many in New Orleans, Pepper Keenan’s life has been defined in some way by Hurricane Katrina, the Category 5 storm that flattened his city in 2005, changing the lives of those who survived forever.

The Corrosion of Conformity frontman lived through one of the worst catastrophes in living memory. Watching the Australian bushfires on TV, he feels empathy for those affected by the massive crisis unfolding here.

I’ve been sitting there watching this stuff (about bushfires) on the news, every day,” he says in his slow, deep Southern drawl. “It’s a different animal, but I get it—trust me! I feel terrible for you guys and I wouldn’t wish that kind of stuff on anybody. A disaster of that magnitude is just insane.”

The scale of the fires failed to dampen the band’s enthusiasm for their upcoming Australian visit, the first for the band with Keenan as vocalist for almost two decades. If anything, the disaster has given them even more incentive to visit, and help heal some wounds. “I’m not very good at just sitting around,” Keenan declares. If there’s anything I can do to help, I want to be there. We could not have pulled ourselves out of the shit if it weren’t for the help of strangers. That’s the way it went. It don’t matter if I’m cutting down burnt trees—I don’t give a shit! It’s helping.”

We’ve got a lot of ammunition these days! There’s a lot of things out there that are not up to par in terms of what I think! I’m from the school of, when someone gets knocked down, you pick them up. It’s pretty simple.
[ Pepper Keenan ]

Pepper Keenan probably won’t have to cut down trees, but the offer’s been made. Corrosion of Conformity will instead be applying salve to injuries by unleashing their blues-inflected sludge metal across the country on the back of their most recent album. No Cross No Crown, their most commercially successful release to date, is the first to feature Keenan since In the Arms of God 13 years ago. After that Keenan, parted ways with Corrosion of Conformity and committed himself to Down. “I did that album In the Arms of God, and then Hurricane Katrina hit down here in Lousiana, and that put a big squish on everything. That was the catalyst for the whole thing. The record company that Corrosion of Conformity was on had folded, and I was doing Down shit all over New Orleans. I quit trying to figure this stuff out, and I was just rolling with it.”

He allowed the momentum to bring him right back to Corrosion of Conformity in 2015, much to the delight of both fans and the other members of the band—guitarist Woody Weatherman, bass player Mike Dean, who was vocalist in Keenan’s absence, and drummer Reed Mullin. The reunion was a highly anticipated one, first officially announced by Mullin ahead of a tour several months later. “It was good, man,” Keenan says of getting back together with the band. “We talked about it for a long time. I was playing with Down, and I’ve tried to quit trying to figure all this rock and roll shit out. Things just happen. Things just lined up and it all fell into place, and then Nuclear Blast offered us a record deal. They came and seen us play and they put the heat on us to put a record out and the fans were asking us to put an album out, but we were working to our own schedule.”

Corrosion of Conformity’s recording schedule is notoriously slow—they’ve made only ten albums since 1984. But eventually, it felt right. The album was done, and touring began. “We did a zigzag around the world and we got to visit a bunch of old friends again and, you know, it just kind of turned into a thing, you know … Four years later—we’ve been on the road two years on this record, and we still haven’t been to Australia!”

Corrosion of Conformity’s last Australian tour was five years ago; their last with Keenan was 2001 when they supported Pantera, which the singer describes as “fun times!”

“Australia’s one of the few places I leave feeling worse than when I got there!” Keenan says with a wry chuckle. “I always tell people it’s like America, without all the bullshit.”

Plenty would argue that Australia has enough of that of its own now, but Keenan won’t be drawn on anything in particular. Any and all discussion of socio-political subjects is left strictly to Corrosion of Conformity’s music.

“We’ve got a lot of ammunition these days! There’s a lot of things out there that are not up to par in terms of what I think! I’m from the school of, when someone gets knocked down, you pick them up. It’s pretty simple. We try to do our part here and there, to try and make the world a better place, however small that is.”