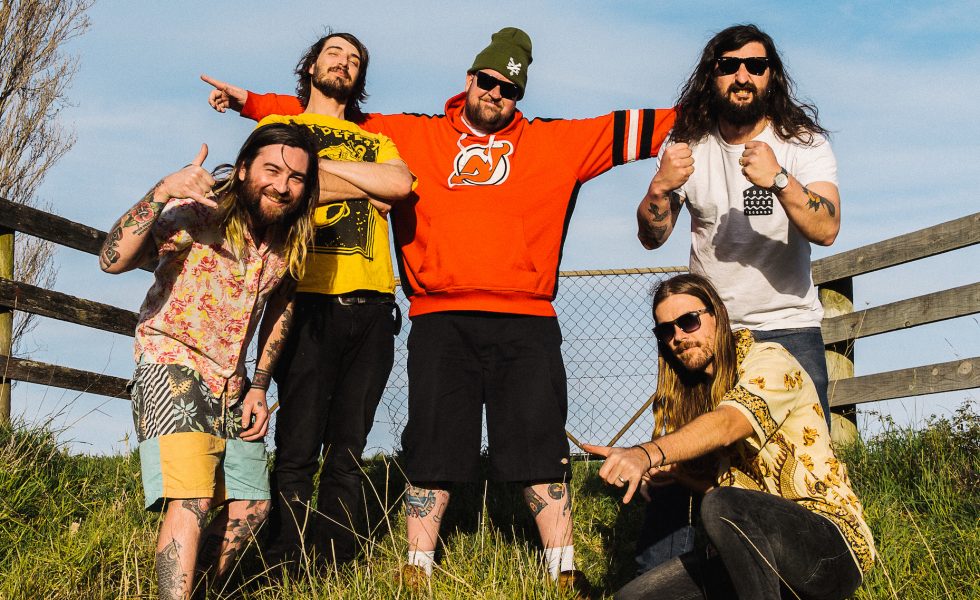 Partygoers The Bennies are no recluses when it comes to putting on a kick ass rock show as well as making people dance to ska rhythms whilst writing songs and releasing music videos with satirical messages.

Since day one the Melbourne outfit have incorporated many styles into their musical canon including ska, reggae, psychedelic, doom, punk rock and employ turntable scratching to add extra electronic soundscapes to their already eclectic sound.

2018 saw the band do a 31-date tour in 33 days across Europe (their biggest to date) and band members parting ways but there was room for new members to join the fold with bassist Nick Williams playing his first show with the band at the Leads festival in the U.K and soon after officially announcing DJ Snes Mega as a full time member of The Bennies. They will be starting the New Year off by hitting the road for an Australian summer tour as well as more dates in Europe later in the year and are also very close to unleashing new music. Hysteria had a chat to vocalist Anty Horgan about the upcoming tour and the announcement of new members joining the band.

“We feel really good about the upcoming shows; touring around Australia is a dream come true for us, we enjoy the beaches and the sunshine. As far as DJ Snes Mega, he’s been doing little bits for us here and there and we did play certain live shows with him and its always been fun but we were a little bit reluctant to ask him to join the band because it’s difficult with already four members but when Craig left us, we decided it would be good to shake shit up and we thought why not get him in full time. He’s a rad dude and a really good performer who brings a lot of fun and energy to the band.”

Our music is the soundtrack to a good night out, for us that’s danceable music, it’s punk rock, it’s hip hop, it’s a bit of metal, a bit of psychedelic rock and definitely electronic music because as a band we want to try to represent what it’s like to be in a club, even if it is in a club where you’re not particularly into the music (laughs).
[ Anty Horgan ]

The Bennies continue to write new songs and now as a five piece, they can progress their sound even further whilst working on what they describe as party monster bangers, for people who may not be so familiar with their music, would Anty like to break down what a party monster banger actually sounds like? “I really have no idea what it actually really means myself (laughs) I guess for us it’s just exciting songs that are big and loud. We’re playing a few new songs for this tour and we really can’t wait for people to hear them, some of them are slow burners that people might need to hear a couple of times others are instant danceable songs.”

If there’s one thing true of The Bennies, it’s that they write songs about having a good time and making people happy rather than writing about how the world sucks or trying to be overly self-reflective “Our music is the soundtrack to a good night out, for us that’s danceable music, it’s punk rock, it’s hip hop, it’s a bit of metal, a bit of psychedelic rock and definitely electronic music because as a band we want to try to represent what it’s like to be in a club, even if it is in a club where you’re not particularly into the music (laughs).”

In the past the band performed Joe Strummer and Operation Ivy tribute shows,

Anty and his band mates sight The Clash and Sublime as two main influences in their music as both bands were not afraid to fuse other genres in their punk rock idioms. As they were both the English and American torchbearers of those styles, it can be said The Bennies are the Australia manifestation and evolution of the worldwide punk/ska revolution.

With a return engagement later in the year, The Bennies feel most at home on the European festival circuit as ska has a solid foundation in the continent but in the meantime their mission is to make the genre less of a cultural shock and more acceptable to their party loving Australian countrymen and women.

Catch The Bennies at the following dates:

END_OF_DOCUMENT_TOKEN_TO_BE_REPLACED

Melbourne’s Stuck Out has announced their release of their second EP Lie Through Your Teeth, …

Like the elite Roman legionaries from whom they take their name, Evocatus unleash a heavy …