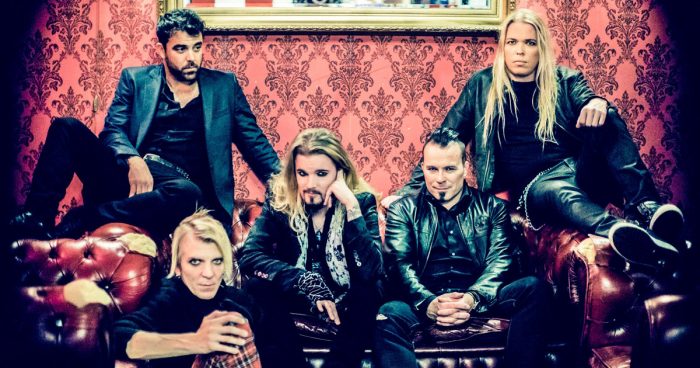 It’s not unusual for a band to start out by playing covers of their favourite songs. What is unusual is when that band is a cello quartet and the covers are Metallica songs. Finnish cellometallers Apocalyptica released their first album Plays Metallica By Four Cellos twenty years ago, and since then they’ve added a drummer and a slew of guest vocalists to the lineup. On the eve of their first Australian visit, drummer Mikko Siren chats to Hysteria about keeping the music fresh and audiences surprised.

Hysteria: Apocalyptica has been a band for decades, but this is the first time you’ve had the same singer for the entire album. What made you want to shake things up and bring in Franky Perez?

Siren: It was exactly that. We’d never done it before and we wanted to push ourselves out of our comfort zone. We’re such a solid group on our own and we’d never depended on an outside person. Those past projects were amazing and there will be more in the future, but to have Franky here, we felt more like one unit. We tweaked each song a lot more than what we had done with guest vocalists—and one huge advantage of doing it this way is that we get to have Franky come on tour with us, so the audience gets the live experience to be the same as the recording.

Hysteria: It seems like the whole theme of this album is cohesion. You were locked down together making this album in the States too.

Siren: It was one of the coolest recording experiences we’ve ever had. We stayed in the countryside near Nashville, living in a cabin that brought new meaning to the term cabin fever! It was so great to experience that Southern hospitality. We had doors open all the time and people were coming in and out … we’d come back from the studio and find people in the kitchen drinking beers, and local farmers bringing us their produce. To be able to separate yourself from the world and just focus on music is pretty rare, so we were lucky to be able to do that.

Hysteria: For sure—even if by the end you get cabin fever.

Siren: And all those energies, even if in the moment you are getting irritated with each other, you can channel that tension into the music. For me, tension is what makes music interesting. If it is nice and neat and nothing there will annoy you, that is the most fucking annoying thing in the world!

Hysteria: I’ve been looking through your setlists for your tour so far this year—how important is it for you guys to include covers in your setlist? You know, the Metallica, the Sepultura …

Siren: It’s very important. I mean, the Metallica thing is the core of the band. It’s how we started and we’re celebrating that with releasing remastered versions of the first album which is Plays Metallica By Four Cellos. We’ve played these covers so much that we feel like we have adopted these songs and made them our own. The energy in those songs makes the show a unique experience. Refuse/Resist [by Sepultura] is stunningly beautiful and primitive and it’s amazing to play then live.

Siren: Exactly. We’ve been doing this for 20 years and since we started, there have been other groups come up who are doing kind of a similar thing to us, and yet people still have this idea of cello being a calm instrument stuck in their heads. It’s like the idea of a rock guitar player being someone who uses drugs and wears leather … the reality can be totally different. We make it work for us and are happy to break down the images people have in their heads.

Tickets via Destroy All Lines