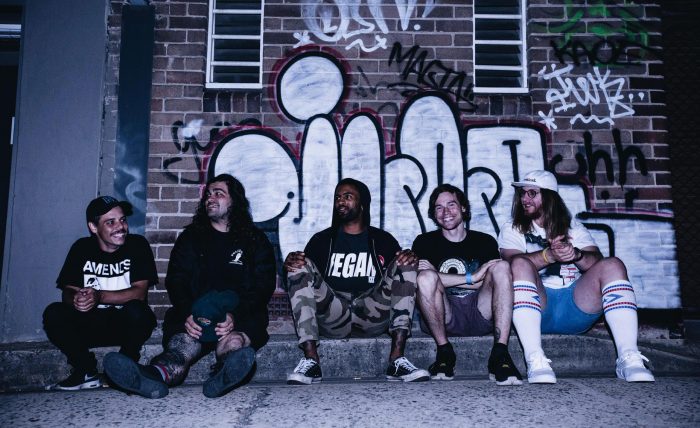 With thanks to Resist Records, you can stream Sydney’s Democratic Republic of hardcore Vices’ new album Now That I Have Seen I Am Responsible nearly a whole week early! Stream it below:

The album can be yours on 17 March through Resist Records. Vices are renowned for their fusion of party tunes and socially conscious tunes, garnering them support from fans in Europe, the US, Japan and New Zealand. They released first single Broken in February via triple j’s Short.Fast.Loud. The band is known for being a democracy, where all decisions are reached via consensus.

Vices will launch the album in their hometown on 25 March at the Red Rattler Theatre. They’ll follow it up with a show in Wollongong on 2 April.

Songs on the album took over a year to develop, and took on a political and personal tone. The album was produced by Jay Maas (Defeater, Bane, Verse, Counterparts), and is the band’s first time working with a professional producer. Vocalist John McAleer says “Jay is a savage when it comes to making music. He keeps it real, he likes the imperfections but also knows when to push for something better, and he understood what we were trying to do and made the whole thing come to life.”

Vices – Now That I Have Seen I Am Responsible Album Review

On their third full-length album, it seems that Sydney-based, melodic hardcore quintet Vices have stared long and hard into the abyss of moral apathy, meme-culture and reactionary justice that permeates today’s youth like a dark stain, concluding: ‘No more. Not today.’ Now That I Have Seen I Am Responsible is the end-result of this collective philosophical undertaking, and it’s a blistering hardcore record overflowing with melody, punk fury and unadulterated rage.

Working with an experienced producer like ex-Defeater guitarist Jay Maas has sharpened every edge of the Vices sound for the better, best exemplified by the huge chorus on Alone, the mix of the ethereal and energetic on Hell, or the thick, beat-down stylings of the concussive Broken. Much like previous efforts, Vices’ third LP is awfully succinct and absent of filler; 13 tracks crammed into just 23 minutes. And while it would be interesting to hear the group experiment with longer compositions and differing textures, what this record may lack in longevity is more than balanced by its genuine sense of heartfelt emotion.

It’s been a while since Australian hardcore birthed a real, bona fide triple-threat. Yet for Vices, Now That I Have Seen I Am Responsible shows that their melodies are stronger, their riffs are quicker, and that their heaviest moments will knock you the fuck out. If there ever was a time for Vices to become flag-bearers of the hardcore underground—both at home and abroad—that time is now.

STICK THIS NEXT TO: Verse, Carpathian, Defeater, Counterparts