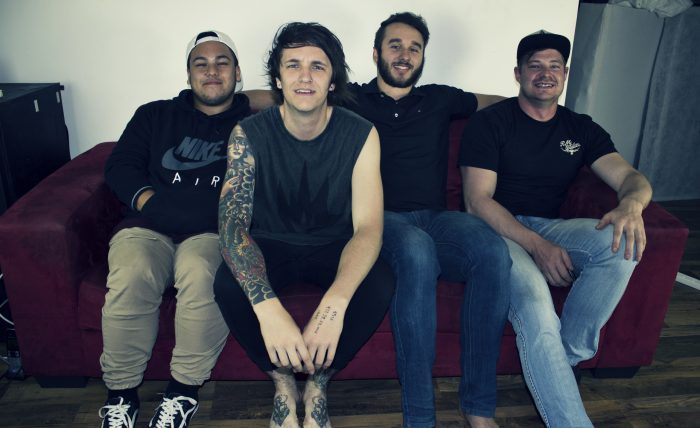 Speaking to vocalist Karl Spiessl about the clip, he says Smokin’ and Drinkin’ was in the pipeline years before the band came together. “It was one of the first songs we wrote together before Ocean Sleeper was even a thing. [Guitarist] Ionei and I have been writing for a while. Ionei records everything too. It was supposed to be our first release since most bands don’t do that for their first one. We wanted to make the film clip replicate the vibe of the song and if Danny Brown sees it, then sick!”

The video by Achiever Visuals was shot in the green pastures of Longford, a town that’s seen its fair share of kids passed out with a bottle of Passion Pop and a few Red Bears next to them. In keeping with the heavy drinking theme, the band made sure it was a night to remember in true Gippsland fashion. “We shot it in my Dad’s shed, and since we’re in the country there’s no noise restrictions or anything. We made a Facebook event to smush as many people into the room as we could. We got so pissed we were throwing drinks around the room. In the clip we had to cut parts out where I was slipping over on the floor [laughs].”

It’s not the only thing that Ocean Sleeper have ahead for fans. With an EP due in November and another single ready to drop beforehand, the band are making sure they’re set to make a mark in the wider scene. “One thing we really want to put out there is that we’re from the country, none of us live in Melbourne. It’s not like a scene where we’re friends with everyone; we’ve pretty much come up and said ‘now we’re here’. At the start of the year no one wanted to help us and we had no idea how to get a show in Melbourne. But now we can headline and have 100 odd people at a show, so it’s pretty amazing how far everything’s come.”

… we’re from the country, none of us live in Melbourne. It’s not like a scene where we’re friends with everyone; we’ve pretty much come up and said ‘now we’re here’.
[ Karl Spiessl ]