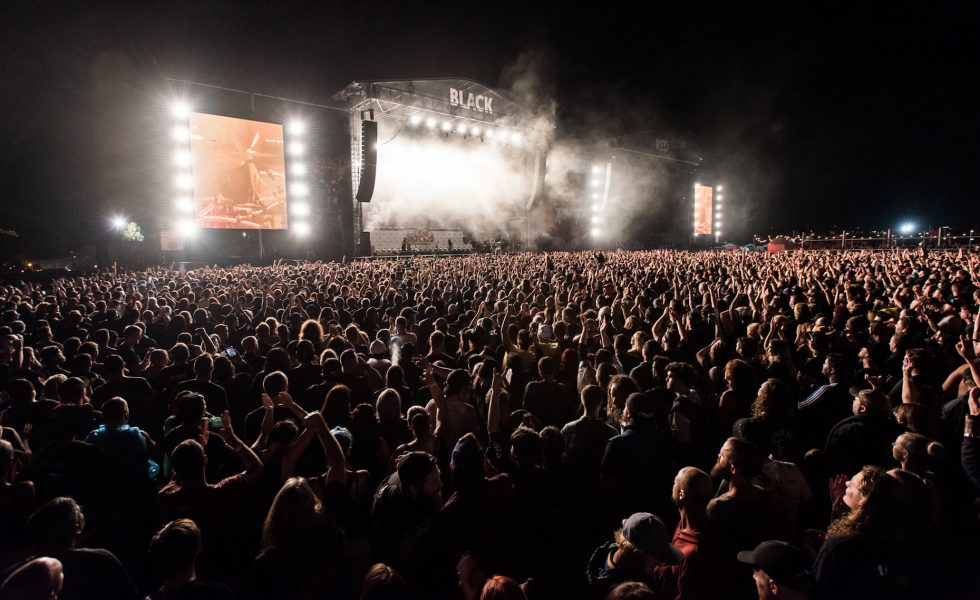 Sep 12, 2018 / WORDS Gabrielle Zgrajewski + The Goon Squad / Dropbox these bands to us kthx

Download Festival 2018 was a hell of a time. Now that Download is dropping its full line-up for 2019 in the wee morn’ o’ the 19th of September, Hysteria has a wish list a mile long—and growing.

What we do know is The Amity Affliction are playing, but the rest are shrouded in pre-announcement mystery. We also know the massive fest is heading to Sydney as well as the rainy plains of Melbourne. We also know organisers are promising bigger and better things for punters of all persuasions. In the void between ignorance and reality, we fill with fantasy. We can all dream, and we can dream pretty big. Here’s Hysteria’s top picks for the international acts we’d die to see on Australia’s sea-girt shores.

Releasing Avatar Country earlier this year, Swedish heavy metal band Avatar are touring the UK and USA. After playing a set at the UK Download Festival this year, hopefully there is something in the works to bring the band and their new album down under for the festival next year.

Formed in 1982 and still touring till this day, Kreator are making the rounds and music to fill that German thrash metal shaped hole in metalhead hearts. Having released their most recent album Gods Of Violence, the fourteenth studio album released by the band, there’s nothing but classic, good old heavy metal. Ze only sah-LOO-shon iss uh … VIOLENT REVA-LOO-SHON!

From the misty topped rolling hills of Ireland come Primordial, an arcane mix of black, doom, and Celtic metal. Their music is a call to arms for warriors long dead, an appeal to ancient Gods, and a plaintive cry against the coming of eternal night. That, and comedian Steve Hughes once filled in on the drum stool for them, so it might be nice for them to have a pint at the Sydney show? // Tom Valcanis

With a crazy list of festivals behind them (for example: Musilac Music Festival, Primavera Sound, Wacken Open Air, Hellfest, and Graspop Metal Meeting to name a few), the six piece, avant-garde metal group Zeal & Ardor released their second album Stranger Fruit earlier this year. Since the release, the band is touring across the USA, Canada, Europe and the UK. What started as a solo project by Manuel Gagneux, Zeal & Ardor are now a fusion of melodic death metal sounds. Groovy.

American hard rock band Black Stone Cherry, formed in 2001, released their sixth studio album Family Tree in April of this year. Released through Mascot Records, it has been said that the album Family Tree gave the band a free feeling; taking them back and rejuvenating them into recording and producing records where nothing is overdone. Previously playing at Download Festival UK, the band are currently on tour for the new album.

Anti-Flag have been the voice of reason in punk rock for a quarter of a century. Not shying away from using music as a vehicle for activism, the band produces albums as profound anthems for entire generations. Almost two years since the band has been on Australian shores, speaking with Pat Thetic Anti-Flag’s drummer (interview coming soon!), the band confirmed they’ve set their eyes on Oz for something early next year… could this something be Download Festival 2019? // Aimee Ravik

Almost 20 years that Avenged Sevenfold have been together, and they have released seven albums, and are currently on a massive US Summer Tour, with six dates left as of writing. Also playing at the UK Download Festival, there should be some Australian love coming soon?

Swiss folk metal trio Cellar Darling are on their Summer ’18 tour, completing dates for their set at the UK Download festival and are now on their way through Japan, USA, Canada and Mexico. Teasing a new album on their social media and releasing a cover of The Prophet’s Song by Queen, it would be great to see Cellar Darling take on the Australian roads for a quick tour around the country.

When rock ‘n’ roll comes calling, Danko Jones answers. Last in Australia for Soundwave ’13, the ageless Canadian pocket rocket slayed punters with balls out riffs and punk rock attitude. What kind of band does Danko front? Well, it’s a rock band singing songs about girls, cars, and girls in cars. Oh, and impromptu lectures about the importance of KISS. What’s not to like? The legend of Danko … lives on. // Tom Valcanis

Listed as the seventh best-selling death metal band in the United States, and releasing sixteen studio albums, Napalm Death are touring up a storm in the northern hemisphere. As mincey as ever, hopefully we hear a new album or a trip to Australia in the works, despite having them in the country in late 2017.

Virginia’s Lamb of God have sweat, bled, and even been incarcerated for metal, and they’re no strangers to Australia. Headlining their own mini-fest with DevilDriver in ’09 and kicking Soundwave’s ass in ’15, Lamb of God have proved themselves as one of the most formidable live forces in heavy metal. Can’t go wrong, holmes. // Tom Valcanis

English metalcore band Bury Tomorrow have been busy at work with their new album Black Flame. Formed in 2006, the band has now five released albums. Last touring in Australia almost four years ago, it would be great to hear Black Flame live.

Finishing up a tour in November, Less Than Jake are seemingly free as a bird to come down and say Hi. Promoting their Sound The Alarm EP in Australia in 2017, with only five dates across the country, it would be great for fans to catch them in case they missed them when they were here last.

It’s been almost five years since Alkaline Trio visited Down Under and now that the line-up for 2019s Download Festival is in question, perhaps they could join it with their new release of Is This Thing Cursed? During my angsty age of 12, I proudly performed Time to Waste (full intro included) at my primary school’s graduation show. Ten years later, I’d really enjoy singing it with other fans if they’d please consider it for their potential set-list. // Mikaelie Evans

At The Gates were pioneers of the melodic death metal ‘Gothenburg sound’.  Formed in Sweden in 1990, their style has since influenced scores of bands. To see At The Gates perform live would be to experience the architects of their style in one of melodic heavy music’s most renowned live sets, with the bonus of seeing the new guitarist. GO! // Audrey Gerrard

Well if we can’t have them for Unify, then we’ll have ‘em for Download. Beartooth have their new record dropping in just over two weeks and raucous tracks like Disease and Bad Listener already have the hype train chugging at high speed. That old school rock and roll spirit is in fine form whenever Beartooth arrive; let’s land their first ever festival spot in Oz sooner rather than later. // Jonty Simmons