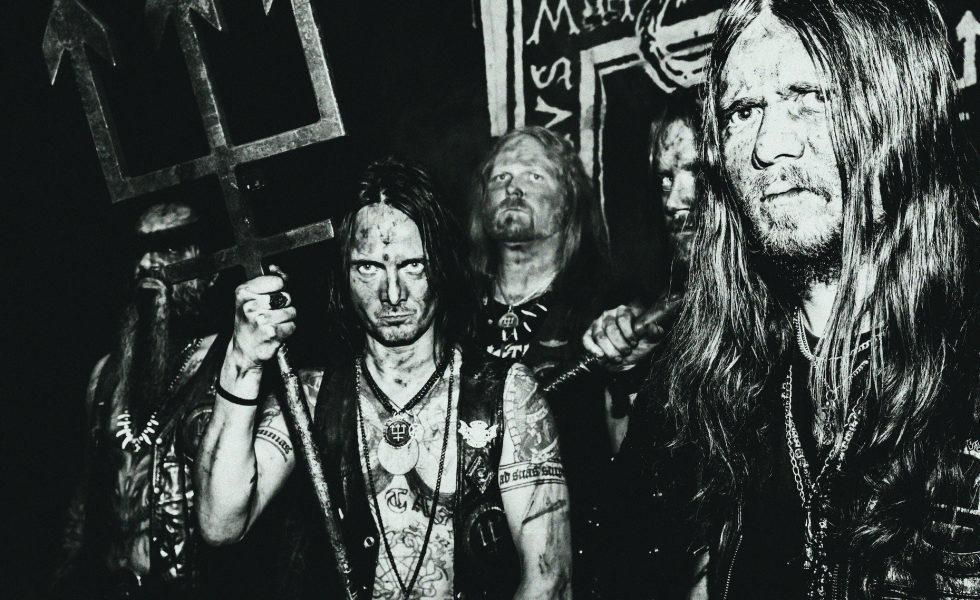 WATAIN // Into The Pandemonium

The Agony and Ecstasy of Watain is the seventh album from paganistic Swedish black metal horde Watain.

Embracing their deep devotion to the tradition of the early second wave of black metal, their new document also takes their music into some surprising new directions. A few days ahead of the album’s release, vocalist Erik Danielsson was keen to explain the concept behind it and how they bring their esoteric and arcane performances right into the studio with them.

Can you first explain the meaning behind the title of the new album?

We wanted a title that we felt was as representative as possible of what was on that album. So I was thinking about how cool it would be if Sodom released an album called The Agony and Ecstasy of Sodom, or if Hellhammer had released The Agony and Ecstasy of Hellhammer. I would really like to hear those albums! (laughs) So I kind of had that in mind. But to try to put it simply, we’ve always worked with emotional extremes with Watain, and that’s the kind of black metal I grew up with. Both agony and ecstasy can be seen as altered states of consciousness that aren’t that far away from the feelings that metal produces in general, so that’s sort of where it’s at. And I like that the name of the band is in there, because it takes away one layer between us and the listener. It’s kind of opening up a little bit, and I like that. I like the idea of the raw experience, I like when the musical experience can become a bit immersive and you can feel close to it. That is what I had in mind with that title.

There are some peaks and valleys across this album. We Remain comes as a complete surprise. It’s very different from what anyone would expect from Watain.

Yeah, it is, absolutely. Some of my favourite albums have those kinds of songs, or at least that kind of dynamic. I think a lot of people reacted when Metallica put Fade to Black on Ride the Lightning. But I love it being there because it just opens up and makes the whole experience something else. It catches you off-guard a bit and brings you into the album a little bit more, I think, having those different paced songs on there. [We Remain] is different, for sure. I think it has a lot of later-era Bathory – Hammerheart and Twilight of the Gods – for musical inspiration there. If you see the whole album as a journey, I see We Remain as an underwater passage, where you are in this underwater, abyssic darkness for a while, and then you go back up and continue.

It goes into a pretty bleak direction after that with Funereal Winter.

I’m pretty happy with the way the track list ended up, as well. That’s always an artform in itself, if you can get it right. I tend to like leaving those things up to chance. I love writing lyrics and making music and so on, but when it comes to whatever happens in the studio and after, I tend to take a step back, because I want to see how the songs work on their own, without dabbling with them too much myself. So the track list wasn’t intentional, but it has a cool drama to it. It has a pretty cool dynamic and I am pretty excited about how the whole thing comes across from start to finish. Sometimes I haven’t felt that way, but this time I definitely do.

That must be pretty amazing to have the songs just fall into the right places like that.

It is! It’s pretty fucking amazing just to be able to record an album in the first place. There is a lot of, for lack of a better word, magic going on around the recording. There’s a lot of weird shit: random coincidences and things that just start making sense that you didn’t have a clue about when you first started, and I think that’s great. I think that’s how it should be. When I listen to my favourite albums, I rarely approach them rationally or in a structured way. I think they’re all enigmas. They are miracles, somehow. It’s very hard for me to picture Destruction in the studio recording Infernal Overkill. I just see a hellstorm in front of me! The technicalities of the songs is kind of detached from that experience. It’s like you’re experiencing a magical occurrence, or something. That’s what I strive for, every time, but that’s the downside of being in a band: you’re aware of how everything came to be. We’re aware of how the studio looks, and so forth. But that’s something we take into consideration when we record and when we write the music. We make sure that it happens in circumstances that represent the music.

How did you create the atmosphere for the current album?

Our studio this time was an old church in the countryside here in the north of Sweden, out in the woods. The owner had just finished turning it into a studio, and it was huge! It was like a Pink Floyd sized studio! We filled it with our altars and our stage props and the things that we like to surround ourselves with when we do music with Watain. That is of course to feel inspired and to feel connected to the work you are doing, but it’s also great to be able to remember it like that. It’s great for me to have that in my mind when I am remembering the album, rather than a sterile, hospital-like environment, or something.

It certainly sounds like recording in such a place, in that environment you created, had a very powerful impact on the album as you were making it.

I definitely believe that! I think that what you hear on an album is affected by the place are in mentally, spiritually and physically during the recording. Other people might think that’s just bullshit. You could have done it anywhere, at home on your computer, in your kitchen … it doesn’t matter. But I don’t subscribe to that. I think about this all the time, when I listen to our older albums. I am grateful that we always chose to do that in a proper setting that is representative, something that looks like a little corner of our stage, or a little corner of Hell!

Judging by what we saw of Watain during your first tour here with Soundwave many years ago, your stage is a corner of Hell!

(laughs) That was our first time in Australia. They got us on this bill and they got us on between In Flames and Machine Head, or was it Meshuggah? I can’t remember [It was Unearth]. But we do what we do onstage. We don’t compromise when it comes to that. Festivals like these are great in that way for a band like us. Because you do tend to stand out a little bit more. Your whole approach is amplified in contrast with all the other bands, and I think that’s great! Many people might feel uncomfortable playing with a bunch of bands you don’t have much in common with or in front of a crowd that is there to see other bands, but I think it is the ultimate way to present your band. I think there’s a lot of people who remember us from that festival.

It was probably not the first time people had seen your band, it was probably their first time seeing any black metal band, and that could have opened up a whole Pandora’s box for some people.

Right! That was really fucking great.

It would be fantastic if you could bring Watain down to Australia once again.

We have had really good talks with our collaborators in Australia. We have some really cool ideas. I always wanted to go and do a show out in the Outback, bring in some generators and play out under the sky. I think it’s pretty fitting for a band like Watain.

There is the Blacken Open Air festival that’s in the middle of Australia. Maybe you could find a way to play there.

Oh yes I see! Amyl and the Sniffers are playing! I love that band.

What is coming up next for Watain?

The first thing we are doing is that we got invited by Hellfest in France to do a kind of album release show, and that’s going to be streamed. I think that’s the main purpose of the show, it’s just a small show for 300 people. That’s the first thing we’re doing, to shake off some of the rust and try the new stage set that we have been building here for the past month. We always build our own stage show. Our only concern is that we are going to need a fleet to transport it! It’s all made of iron, so that’s a little dilemma we have, but that’s what we have management and production companies for, right?