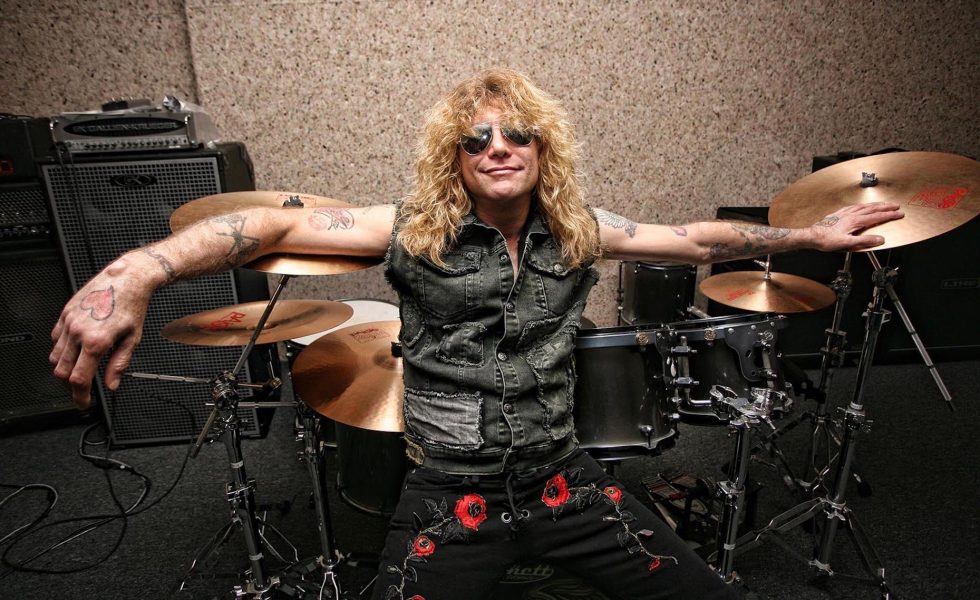 The laughter emanating from Steven Adler is a disease—an infectious, viral but positively lovely disease. “I love Australia!” he cries.

“I’m looking for someone to marry. You know a nice guy out there I can marry so I can live out there? My wife won’t let me marry a girl, I have to marry a guy–there are two sides to this whole thing!”

As much as it would be awesome to help the man out in establishing some permanent roots here, ultimately it’s the music he brings that’s going to last. With his band Adler’s Appetite, the former drummer and co-writer for Guns N’ Roses will celebrate the 30th anniversary of the release of the classic album Appetite For Destruction, performing the seminal release in its entirety. “I have something new, a new rock song, something for the fans,” Adler adds.

“The main thing is we’re going out there–I’ve got a great band! My singer, who I’m not mentioning yet, he’s a Broadway singer, he’s a movie star and he’s got a voice like a demon angel!

“We’re gonna play Appetite For Destruction the way it sounds on the record, not the way the G N’ R guys are doing it now, we’re gonna do it the right way, and then some!”

Whether he finds that Aussie bloke (with his wife’s permission) to settle with or not, it sounds like this tour is going to be a massive party. The fact that Adler has the firm support of his wife and family in this adventure is amazing, given that careers in rock don’t get more colourful than his.

Adler’s tenure with Guns N’ Roses was marred by drug addiction, landing him in several situations that came in part with being in a band of that ilk but ultimately, meant confrontation and disagreement with the other members and his sacking from the band. Throughout his experiences Adler’s family have been with him the whole way. Adler’s demeanour changes from carefree to quite reflective as he ponders the past. “In the beginning [of Guns N’ Roses] with my mom and my brother, it was really fun and exciting and then, if you read my mom’s book, you’ll see how once the drugs, alcohol and fame and everything came in, everything got really ugly and there was a lot of resentment for many, many decades.”

For me to be able to get sober I had to learn and practice not having resentment and also practice being impeccable with my work, and not taking things personally, and not making assumptions, and learning to just do my best, no more, no less.
[ Steven Adler ]

Indeed, many of Adler’s issues were documented over the last 25 years in collections of diaries, letters and journals by his mother, Deanna Adler, which were then published last year in her book Sweet Child of Mine: How I Lost My Son to Guns N’ Roses. Deanna joins her son on tour for a very special Q & A segment before the big show. Today, Adler is in a remarkable place of positivity and honesty when it comes to discussing his tumultuous past. “Resentment and addiction, it’s like rocket fuel and a match–you light that match it’s going to be a mess and it’s going to get ugly,” he says firmly.

“For me to be able to get sober I had to learn and practice not having resentment and also practice being impeccable with my work, and not taking things personally, and not making assumptions, and learning to just do my best, no more, no less. That’s The Four Agreements, a book that I read from a man called Don Miguel Ruiz. It’s a book that changed my life.

“You’ve heard that saying, ‘Life doesn’t come with a handbook.’ Well it does, it’s called The Four Agreements. I’ve been practicing it for four years, I’ve been sober, I feel like I was when I was a teenager. I’m a happy go-lucky guy again, I don’t have resentment, I enjoy life, and the only thing that matters to me about the past is yesterday.”

That happy and compelling vibe returns to Adler, inducing the biggest of smiles. “Did I do anything yesterday that I need to be ashamed of or make amends for or feel terrible about? When I woke up this morning, I had none of those, so today has been a beautiful day, and I can say I love you and mean that from my heart, and I love you! Australia, I love all of you!”

There’s certainly a comradery in Australia among music fans that isn’t like anything anywhere else – we’re family. Adler coming to Australia with his mother is a beautiful example of a solid family unit, Deanna having been with Adler through thick and thin in every definition of the word. ‘She kept a diary of everything, that’s amazing!’

My goal was to finish what I started, and Izzy’s too [former guitarist Izzy Stradlin]. Iz is just as heartbroken as I am that the three of them decided to leave us out and bring three strangers in–who are those people?
[ Steven Adler ]

“Both of us will do the Q & A and believe me, if you ask any question, down and dirty, you’re gonna get a straight answer, no bullshit. No beating around the bush you’re gonna hear the exact motions we’ve gone through. The ‘F’ word might be mentioned a few times!”

Funny Adler should mention the ‘F’ word because he’s made it through this interview without dropping a bomb at all, somewhat unusual for a rock ‘n’ roll interview. Adler is evidently quite the gentleman. “I’m having a spot of tea and relaxing watching Family Guy,” he laughs.

Adler’s unique emotional journey and musical style is sure to be played out when he takes to the stage. “You’ll hear everything the way it was supposed to go,” he says. “I know G ‘n’ R were out there last year and the fans who got those songs…

“The thing about Guns N’ Roses that made us so great and so magical is because we were a magic band, like Led Zeppelin, or Aerosmith, or Queen,” he continues with an air of ennui. “Once we were together we couldn’t do anything wrong. If one person left the band and did Appetite, Appetite would not be Appetite. And it’s a shame because Use Your Illusion when we did the demo tape, I kept saying, or we kept saying, it was gonna be bigger and better than Appetite but once they kicked me out of the band, part of the magic was gone. It’s a different band. A completely different band.”

For Adler, there’s never too much damage done that the chance for reconciliation has passed. “You know, if they want me, they know my number–I’m ready to rock,” he says. “My goal was to finish what I started, and Izzy’s too [former guitarist Izzy Stradlin]. Iz is just as heartbroken as I am that the three of them decided to leave us out and bring three strangers in–who are those people? It’s just not cool.

Adler certainly, despite everything, is still doing it his way.