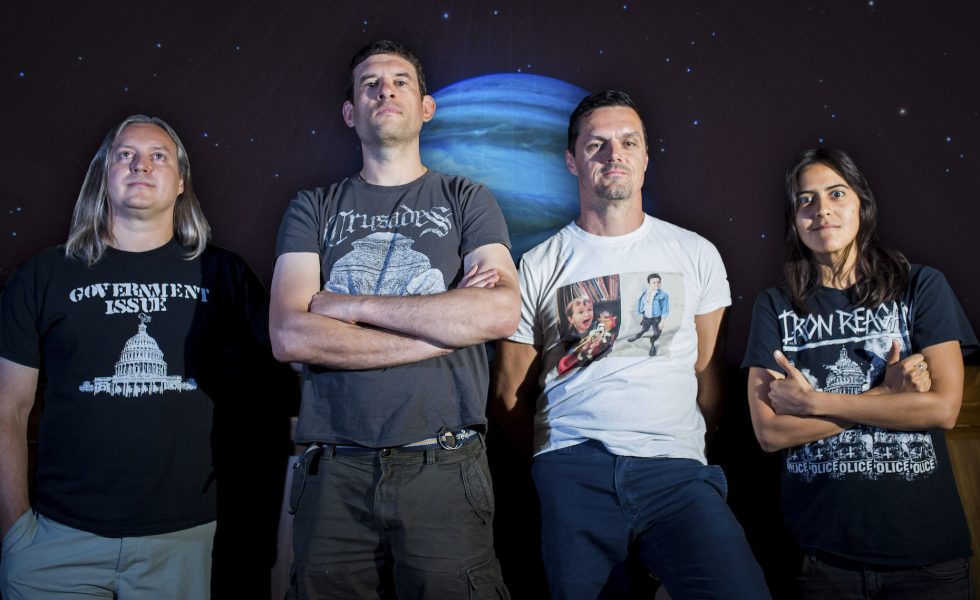 Apr 09, 2019 / WORDS Mikaelie Evans / PHOTOS Greg Gallinger / This has been a promising unison since the pre-release of their last album, Victory Lap.

Since the formation of Propagandhi in 1986, we’ve seen a few line-up changes although the band’s initial foundation still stands strong between Jordan Samolesky and Chris Hannah who are joined by bassist Todd Kowalski and guitarist Suylnn Hago on the line-up.

This has been a promising unison since the pre-release of their last album, Victory Lap. Before Propagandhi hit the road this May 2019 in celebration of that 2017 release, Victory Lap, OG drummer Jordan Samolesky takes the time to have a chat about what the ‘hap is and just what we might be able to expect on their upcoming Australian/NZ tour.

Once he’s enthusiastically answered the phone one evening, Samolesky briefly mentions the weather to ease into the conversation. Once we’re past the small talk of Canada’s dire winter and into discussing Propagandhi, it’s time to catch up on their last release and how they got there, as Samolesky begins: “We just allowed ourselves a long time when we’re putting records together. We don’t really hold ourselves too much of a difficult calendar and we give ourselves a lot of flexibility and we were able to spend a lot of time in our rehearsal space and we had a lot of space to ourselves and just really allowed ourselves to kick into the song-writing and just kind of let it go with no strings attached, and not trying to rush it at all … and also, we have a new guitar player. She came into the picture when we were finishing up writing a lot of songs and she kinda put her own touches on the record.”

“There are a lot of different varieties and approaches, I guess like a lot of times, occasionally, we’ll break off in pairs and stuff and work on different aspects of the music like rhythm and leads, or, the guitar and the drums together, or, y’know just flesh out a lot of ideas. We usually record a huuuge amount of, y’know, all the practices and takes of different songs, so we just kind of keep the machine rolling while we’re doing a lot of stuff in case we just, y’know, we don’t wanna forget any moments where we might’ve broken through on something.”

First of all, we’ve never really been a band that tours super regularly and I think that kinda helped us over the years, just kinda really appreciate it when we do go out and it’s a huge challenge for us obviously, the older we get and stuff.
[ Jordan Samolesky ]

With Victory Lap exhibiting some of the band’s musical development, one might wonder where they’ve drawn inspiration from in recent times; “Some of it has to do with older line-up changes. We got a little bit harder sounding when Todd joined the band in ’97, over 20 years ago, and I kinda think we always maintained certain, melodic sensibilities as well. Three of us here in Winnipeg shared a lot of influences from the mid-late ‘80s metal and punk scenes and I think we often return to those roots when we’re looking for mutual inspiration, especially, and those would be the influences, at least musically, that kinda ring through. I don’t think we’ve ever really approached like consciously, tried to move in a certain direction; whether it’s harder or lighter or anything, we just play riffs and if things seem to go together nicely and we all kinda think it’s cool, then we move with it.”

Focusing specifically on Victory Lap and where the lyrics were drawn from, Samolesky honestly reminisces through the line; “I can’t speak for Todd and Chris, our main lyric writers, so I can’t comment directly on that, I wouldn’t feel comfortable with that … but I think, again, going back to our earlier influencers, one of the really appealing sides of punk and hardcore bands at that time was this really fresh, in your face kind of expression of … I’m thinking of bands like Dead Kennedy’s, MDC, Subhumans … It was all before punk sort of exploded in the mainstream and I just felt like it was a really genuine, political perspective emerging form of music.”

And now, in regards to touring, it’s the same-same but different sort of process as the bands original drummer continues in a calm yet enthusiastic tone; “First of all, we’ve never really been a band that tours super regularly and I think that kinda helped us over the years, just kinda really appreciate it when we do go out and it’s a huge challenge for us obviously, the older we get and stuff … but yeah, when we’re considering some of the material and how we’re challenging ourselves, y’know … you’ve gotta really sign up for it and make sure that we’re able to pull it off live and all that so it’s a good challenge and we all look forward to it so we’ve taken a little bit of time off the winter here and haven’t been focusing on playing much at all like our last shows were in November so we’re really excited to just get going and enjoy playing music for a little while live, we’re really looking forward to it.”

As their tour quickly approaches, Samolsky’s got some final words and one helluva guarantee for us Melburnians, “Wednesday night’s show, we promise to have an extra amount of fun because it’s not a weekend and we’re just trying to express that we’re going to pull something out that will be unique to that night.”

So, best grab ya tickets via the link before they sell out in your local city:

Catch Propagandhi at the following dates: