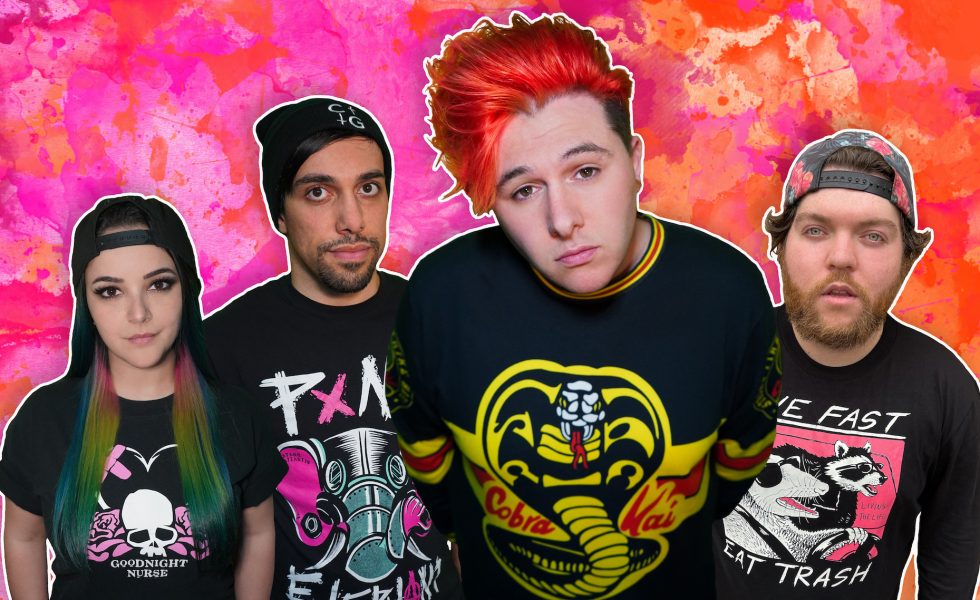 Sure, we could focus on all the shit things that have happened over the past few years but let’s shine a light on something really great instead—the formation of Paperweight!

The Melbourne up-and-comers stomped onto the scene in May of 2020, quickly racking up thousands of streams and stealing the hearts of pop-punk fans all over the country. We caught up with vocalist Haris Dillinger and guitarist Luana Tosti-Guerra to chat about their rise to the top, plans for this year and more.

Hysteria: For those not yet initiated into the Paperweight world, can you introduce yourselves and share some of your history.

Haris: We blossomed from an old band that I was in for many years. It was fizzling out, and in its last year, I had written all these songs. I was still very motivated to keep doing stuff, and I had those songs, and it was around that time I met Luana. She had a friend, our drummer Basil February. It came together quickly. We didn’t spend that much time searching for members. We found our guitarist Tom Ballinger relatively quick, and then we just took off from there.

We had six months together, preparing before we officially announced ourselves. We wanted to sort out what we were going to do and how we planned to do it. Then once we started, we had to take it day by day due to COVID, but I think we’ve been pretty lucky. I think it’s taken us all by surprise how quickly things have happened with it.

Despite everything going on in the world, you guys have made such massive strides in the last two years, dropping so many great tracks. Share your secret with us. What magic spell have you cast?

Haris: It was all very organic. I believe when we launched ourselves, we were in the middle of the first lockdown. We thought to ourselves, we’re a new band and the most important thing is music. We already had those songs recorded, which benefited us, and we were initially planning to release them as a whole EP, but we didn’t know how long we’d be in lockdown. We didn’t know how things would play out, so we decided to release them all as singles and time it well.

Luana: We filmed the music video for The Kids on the Ground the week before the first lockdown. We had really good timing.

Haris: Yeah, we just adopted this very D.I.Y style. Partially because we had to, but also because it was just who we are. We love doing things ourselves, and we love being creative. We didn’t know what was going to work, but with everything going on, we just decided to keep releasing stuff and keep having fun with it and keep working within the boundaries of COVID. Weirdly, we think it helped us because a lot of bands weren’t doing that at the time. It opened the doors for us to come out of nowhere and get people’s attention.

Luana: I think it was the people we surrounded ourselves with as well. I’ve been going to shows since I was 14. We had so many friends and contacts that just wanted to support us as well, which helped a lot.

We love doing things ourselves, and we love being creative. We didn’t know what was going to work, but with everything going on, we just decided to keep releasing stuff and keep having fun with it
[Haris Dillinger]

Tell us about your recent appearance at Knight and Day. That must’ve been such an incredible experience.

Luana: It was insane. I remember when our manager called us and asked if we wanted to play a festival on New Years at Kryal Castle. We had no idea who was playing, running it or anything, but we said yep, chuck us on. The day before they announced it, when they sent us the flyer, we found out who we were playing with. We were just like: What the fuck, we’re playing with Parkway Drive?! It was such a cool experience.

Haris: In 2020, we kept on releasing, and we only played one show. And then last year, we had a bit of a dead period of not releasing music just because of all the uncertainty and lockdowns. When we got to the end of 2021, we did feel a little deflated. We weren’t used to not doing anything, and we did feel like we lost a bit of our momentum. So Knight and Day came at the perfect time. It was our third ever show, it was amazing.

In our eyes, our Oz pop-punk scene just keeps going from strength to strength. Who are some bands we should check out?

Luana: Between You & Me and Stand Atlantic are the first two that come to mind. Locally, there’s Snark, Terra, Future Static, Catholic Guilt, Down For Tomorrow. I could go on forever. I love our scene. RedHook. The Dead Love. So many good bands.

What’s in store for this year?

Haris: Pretty much everything we wanted to do last year times 10. We had planned to be in a position where we had more songs out, but because we couldn’t do that, we’ve planned it out for this year instead. The main thing we missed from last year that we’re all hoping we can do is play shows. There’s a lot of stuff in the works as far as releases and shows. We just want to imagine it’s 2021 again and put it on steroids. We want to smash it out.