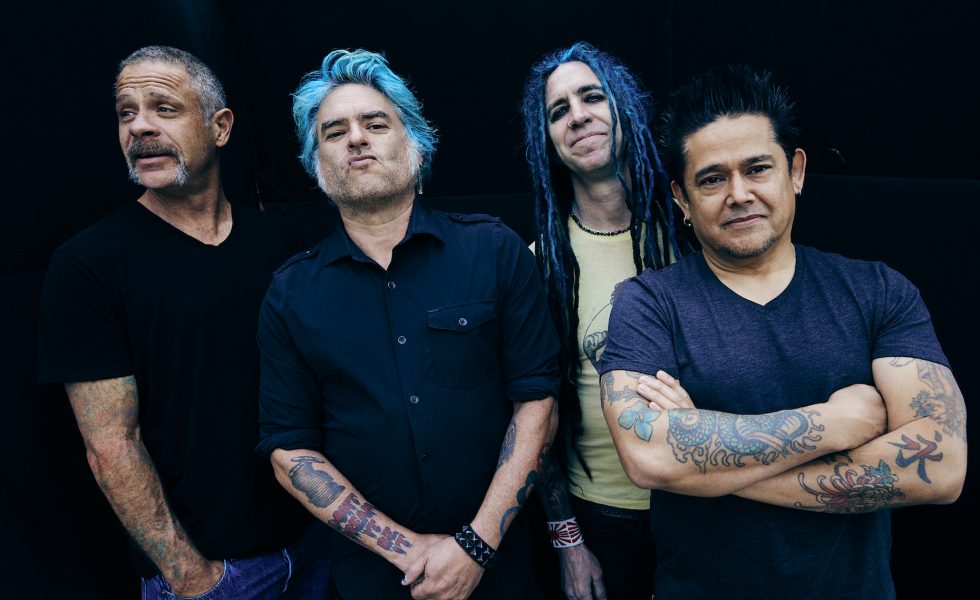 NOFX // The New Fat Mike: “I plan on doing a year sober–I’m having a really good time”

At any NOFX live show, Fat Mike has always held court as a jovial jester. That hilarity and unbridled style of performance has, however, often been fuelled by the singer’s enjoyment of a drink.

MORE: How Architects Became One Of The Biggest Metal Bands In The World // INVERTED FESTIVAL: Aussie Punks WAAX Return To Rock Inverted REVIEWS: BRING ME THE HORIZON: POST HUMAN:SURVIVAL HORROR // KILLER BE KILLED: Reluctant Hero // ARCHITECTS: For Those That Wish To Exist // THE PRETTY RECKLESS: Death By Rock And Roll // NOFX: Single Album

Though he entered a state of sobriety four months ago, Mike’s playful nature is unaffected. He’s far from boring. In fact, he speaks with an obvious happiness that only goes to boost his playful side.

“I plan on doing a year sober and see how I feel then. I’m having a really good time,” Mike says down the line. “Every day I’m pretty happy. I’m focused, I’ve lost 20lbs, I’m writing like crazy … I get bigger boners, too. I don’t have vodka and coke dick.”

“You see in America where cocaine is affordable, it’s a lovely drug that people do quite often. In Australia, it’s ridiculous, that’s why you have to go to heroin. What, am I talking too much shit about Nick Cave? Sorry.”

See? Still a riot. This sobriety wasn’t entirely Mike’s choice, though. An intervention of sorts by the rest of NOFX after Mike sacked their manager, started a chain of events that gave him the kick up the butt everyone else thought he needed. “I haven’t told many people this,” he begins seriously, the lighthearted nature now a faint undertone. “Our old tour manager started a rumour that I was on so many drugs that’s why I fired him–I was using, a couple times a week, but I was not a drug addict or an alcoholic. My life was manageable.”

“Then one day NOFX shows up at my house to have an intervention. I did a line and a shot of vodka and ‘I said ok let’s do this [the intervention]’ and they insisted I go to rehab for a month. I said, ‘forget it’. They just assumed; they didn’t talk to my roommates.”

I plan on doing a year sober and see how I feel then. I’m having a really good time. Every day I’m pretty happy. I’m focused, I’ve lost 20lbs, I’m writing like crazy … I get bigger boners, too. I don’t have vodka and coke dick.
[ Fat Mike ]

“One week later, I used every day for a week, a lot, because I was fucking pissed. Then I went on a sober vacation and I was at M Shadows’ [Avenged Sevenfold] house when I puked two litres of blood, started shitting blood–I thought I was dying. It was a bleeding bacterial ulcer.

“I had a bad episode, and I said, ‘you know what, fuck it, I’ll go to rehab for a month.’ Because I was in bad shape and I was gonna quit using anyway, might as well get some life lessons. And I learnt a lot in rehab, it was great–but I’m not a drug addict or alcoholic, I never was.”

Fear not. A clean and happy Mike doesn’t affect the quality of the band’s new album, Single Album. In fact the release, while quintessentially NOFX, sees Mike enter on some of the most unabashed lyrical content he’s ever produced, trying to outdo himself with things he’s never done before. “I’m having fun singing about new subjects,” he says. “It’s such a pleasure for me not to just think about something I’ve never done before but to nail it.”

At no point was Mike ever apprehensive that this new personal journey would have a detrimental impact on his creative output, rather, he used it as a catalyst for the release. “I went to a therapist and a doctor and they both told me I’m not an alcoholic. They told me, I don’t know how to deal with my issues or with stress, and that was my problem. They helped me change my perspective and get a handle on how to deal with problems.”

“I’m not a drug addict, I just don’t know how to deal with shit.”

I realised this a long time ago, preaching doesn’t really help. It turns people off and it’s kind of tripe. I like to tell stories of different people, different lifestyles and of myself and sick parables.
[ Fat Mike ]

Fuck Euphemism, a track in which Mike places a lot of pride, deals not only with his strengths and ideas, but those of the LGBT community, too. “The LGBT community really helps young people,” Mike says, elation creeping back into his voice. “They really helped me because I’ve been kinky since I was 12 [years old], and practising kink since I was 17 and crossdressing.”

Still a relatively underground concept, Mike sort of wants to see it kept that way, though to be seen as an identity, one that could be included within the LGBT network. “I know a lot of bros and sis that are into kink–it’s a sexual identity, it’s how I identify myself like a cis person would, or a trans person–I’m a queer, but being kinky, being with them is punk rock.”

At 14 albums in, why not go all out with your opinions for social change? In Fuck Euphemism Mike lays his perceptions bare, putting forward some arguably sensible ideas around identity and pronouns. “What’s important about that song is using the term ‘per’–person–I think people should use that. It’s a less complicated word than using ‘they’ or ‘them’. Like, ‘Hey I was with ‘per’ last night, isn’t ‘per’ great? Oh I love hanging out with “per”!’ It works in every situation if you want your identity to be ‘they’.”

“If you want not to be binary and to be your own person, but they and them is confusing. That’s what that song is, when I sing that line, but ‘per’ is a pronoun. It’s a better pronoun, and I think it should be shared.”

“People can call themselves whatever they want–I call myself a transvestite not a cross dresser because I grew up with Rocky Horror–but if people are talking about you, ‘per’ is less confusing.”

Mike has taken a road less travelled in Single Album, that much is clear. Retaining that classic NOFX lull, the release also features some wonderful new interjections of sonic power. Though armed with this sound and his boisterous philosophies, Mike admits he’s not the kind of guy who wants to be a hero or preachy with his opinion–but he still wants people to have some sort of confident take away from this album. “I realised this a long time ago, preaching doesn’t really help,” says Mike, “It turns people off and it’s kind of tripe. I like to tell stories of different people, different lifestyles and of myself and sick parables.”

“I really have no filter anymore, I just tell it like it is. Standing on eggshells, that’s no way to live.”